It’s been a long time since we’ve posted to the blog, but never fear: all is well aboard Lungta! In the last few months, we’ve retraced our steps a bit: traveling from Tahiti back to Tahanea, meeting up with old friends and making new friends on different boats, dealing with equipment that failed unexpectedly and making repairs when the parts became available, traveling back to the States to visit our families while Lungta awaits us in Port Phaeton. Part of the reason our blog posts have trailed off is because it feels like there isn’t really much new to report. 🙂

At the moment we find ourselves in Port Phaeton, a big safe bay nestled in the middle of Tahiti. We’ve been here since our return from the States in mid-December. It has a reputation of being very rainy here, but last year didn’t seem so bad to us. In contrast, this year has been much wetter. Where we had thought that others were just “whiny”, now we’re beginning to see their point. 🙂 One upside to rain, of course, is lots of rainbows! 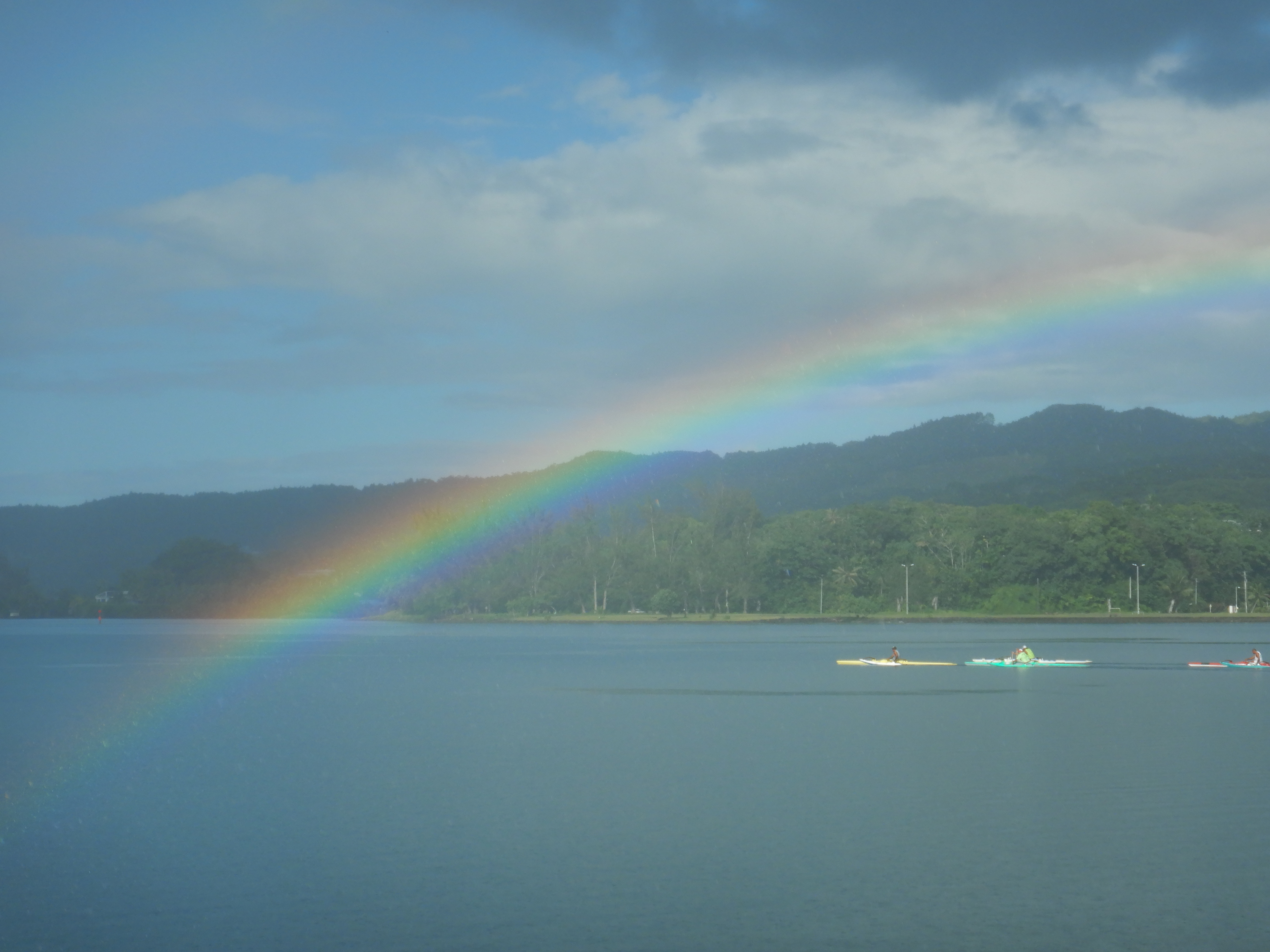 We started a boat project that has turned out to be taking much longer than we expected, mostly because we need an adapter for our welding system that isn’t available here because it uses an American standard. (It’s a flow regulator for the argon gas tank that is needed for aluminum welding.) We’ve figured out a way to get one shipped here from the States, but it’s taking time. As soon as it arrives, Dan will be able to fire up the welder and whip through the work – in between the rain showers.

The project is to extend the roof of our pilothouse to cover the back deck. This “hard canopy” will replace the fabric awning we’ve used since we left Portland. It will hold three new solar panels and two that had been mounted on the side rails and have been encroaching a bit on the deck space in the back. We’ve already got the solar panels wired up temporarily on the fore-deck, and are enjoying the additional power. We’re running the generator much less than before, and will recoup the costs of the panels in just a couple of months. The canopy will also incorporate a water-collection system to fill our water tanks, and it will be almost twice the size of the old awning so we expect to run the watermaker less often as well. The head-clearance will be higher, and the area kept out of the sun and rain will be wider. We will no longer have the trip-hazard offered by the supports of the awning, and in general life will be much improved! 🙂 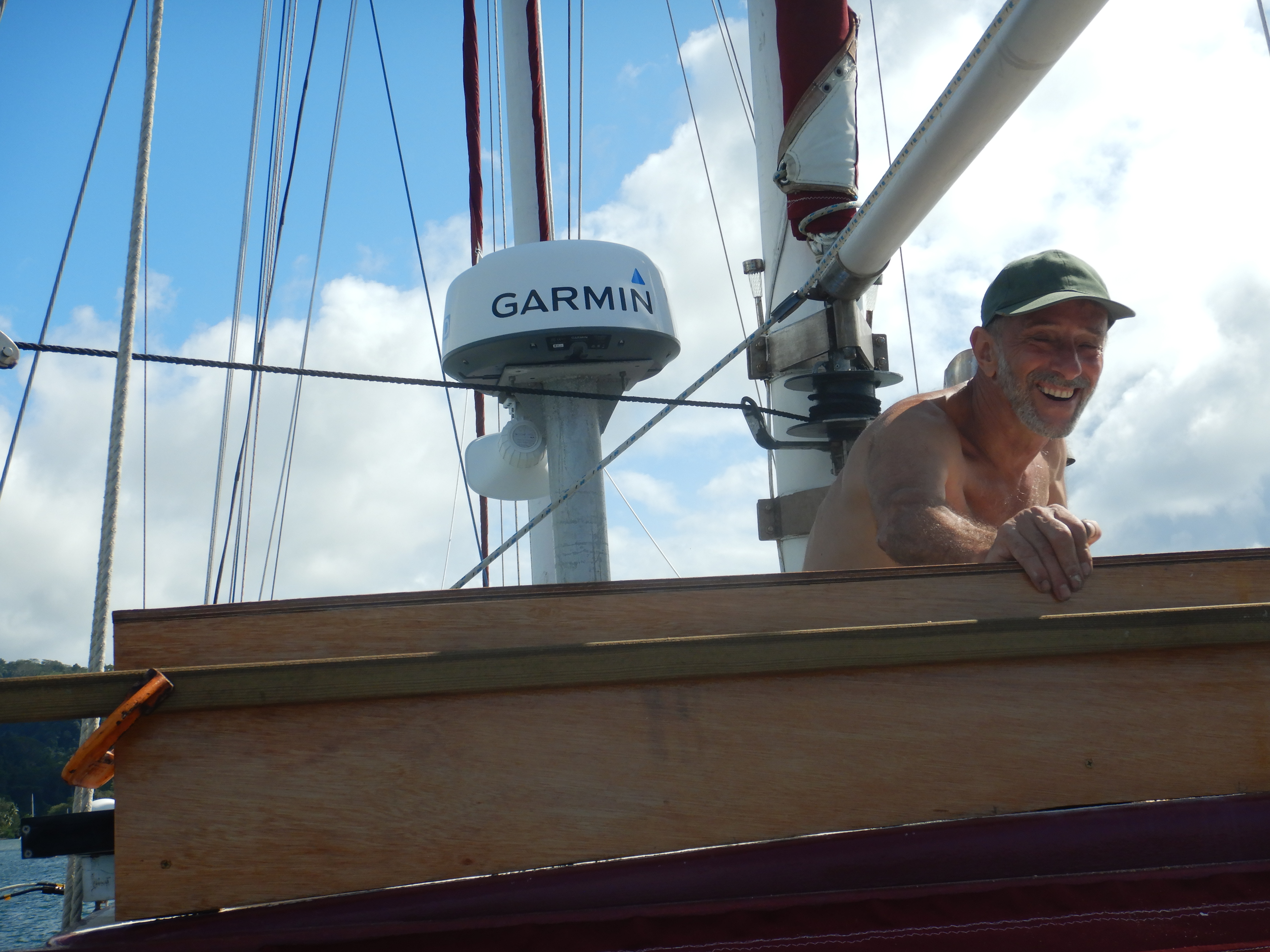 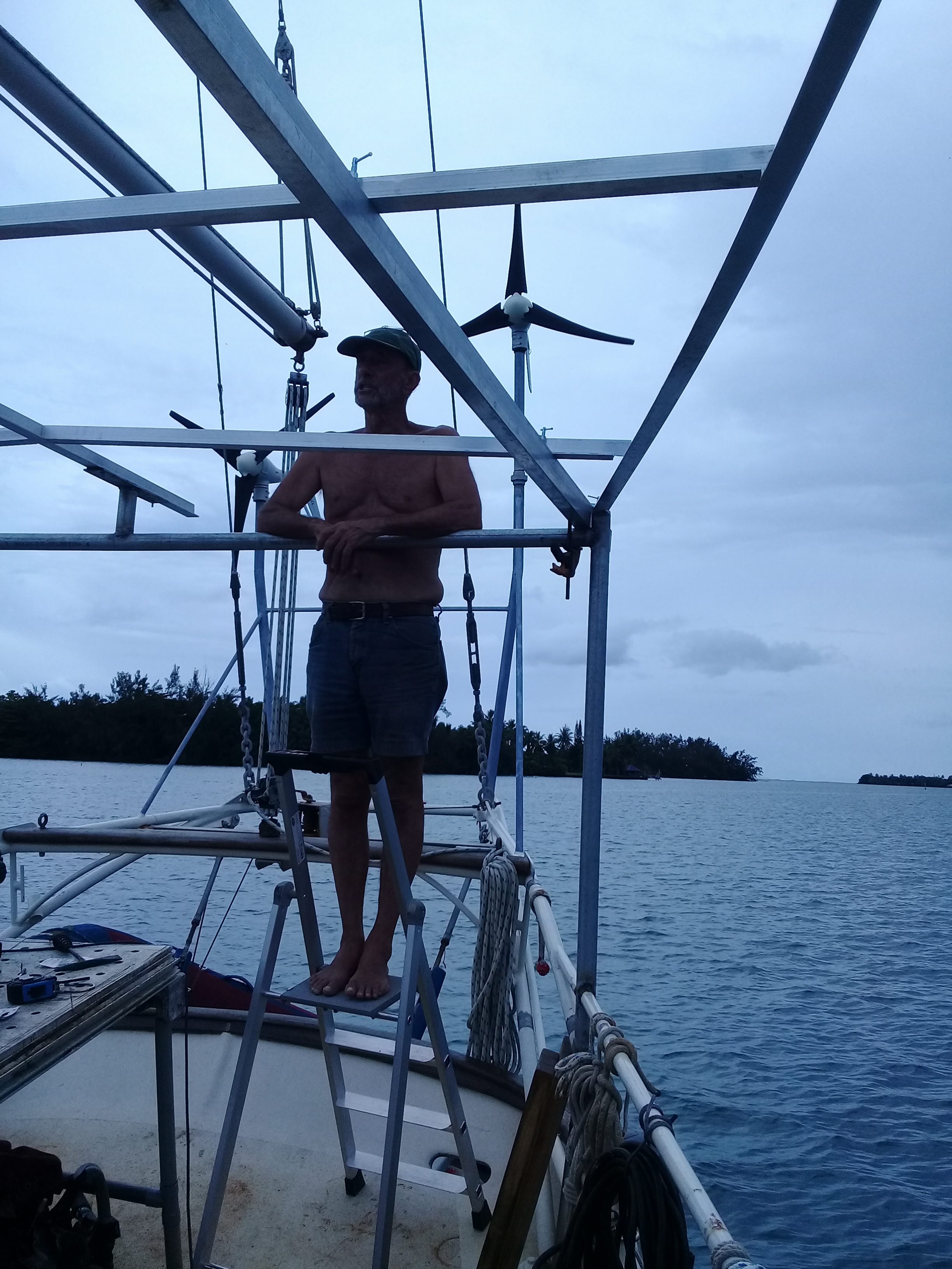 While we wait, we’ve done lots of smaller projects around the boat, including sewing an elaborate insect screen for the main entry which hangs from the ceiling on two wooden dowels and has two panels like doors that you only have to push aside in order to pass through. It’s much easier to use than the previous screen which hung on dowels that you had to slide forward out of the way and then carefully drape back in place behind you. 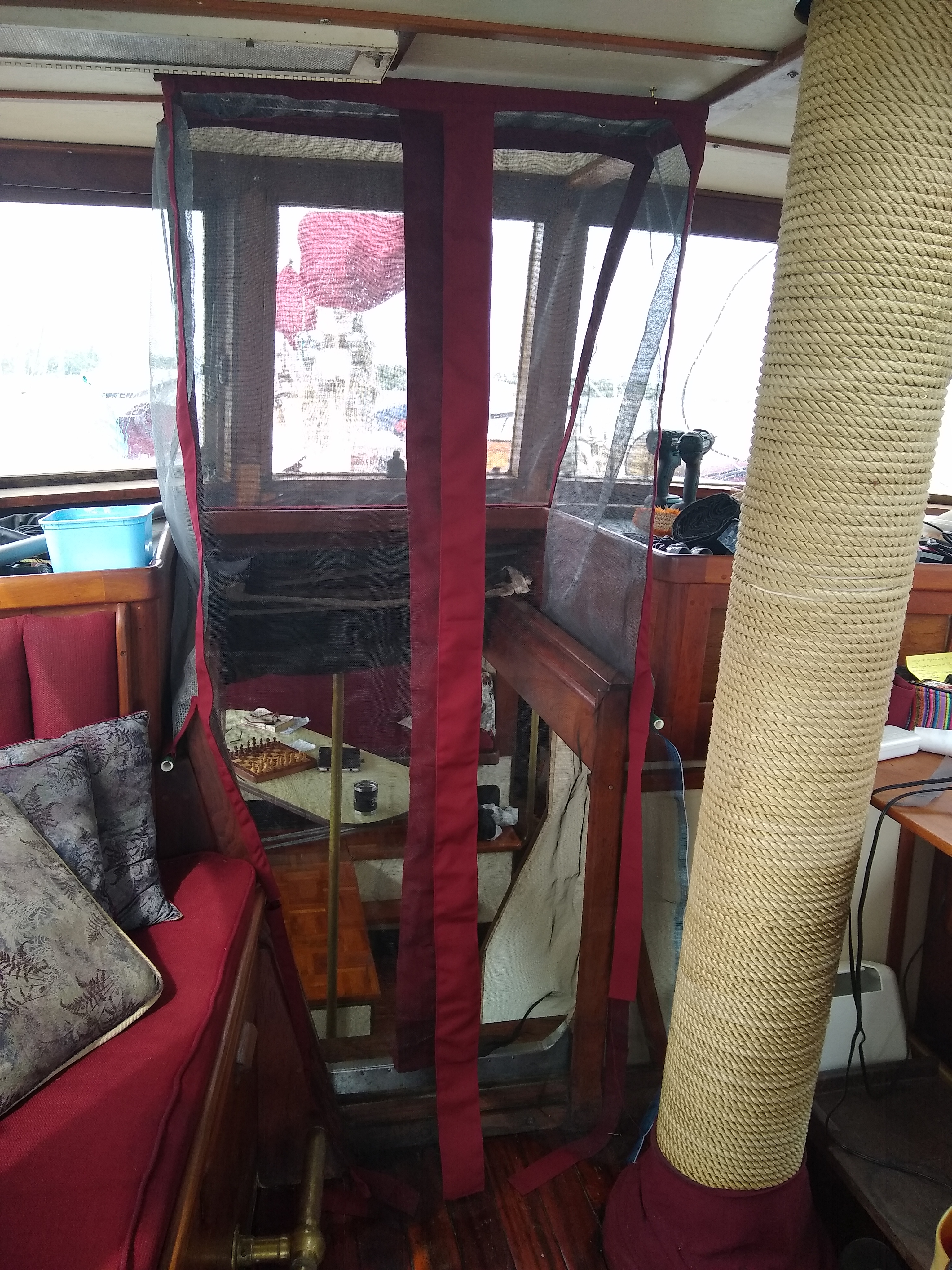 We’ve also put in a couple of tiny cabinets at the foot of the bed, enclosing an unattractive space that was hard to make use of. Kathy’s calling them the “shoe boxes” because we expect to store a few pairs of shoes on top. 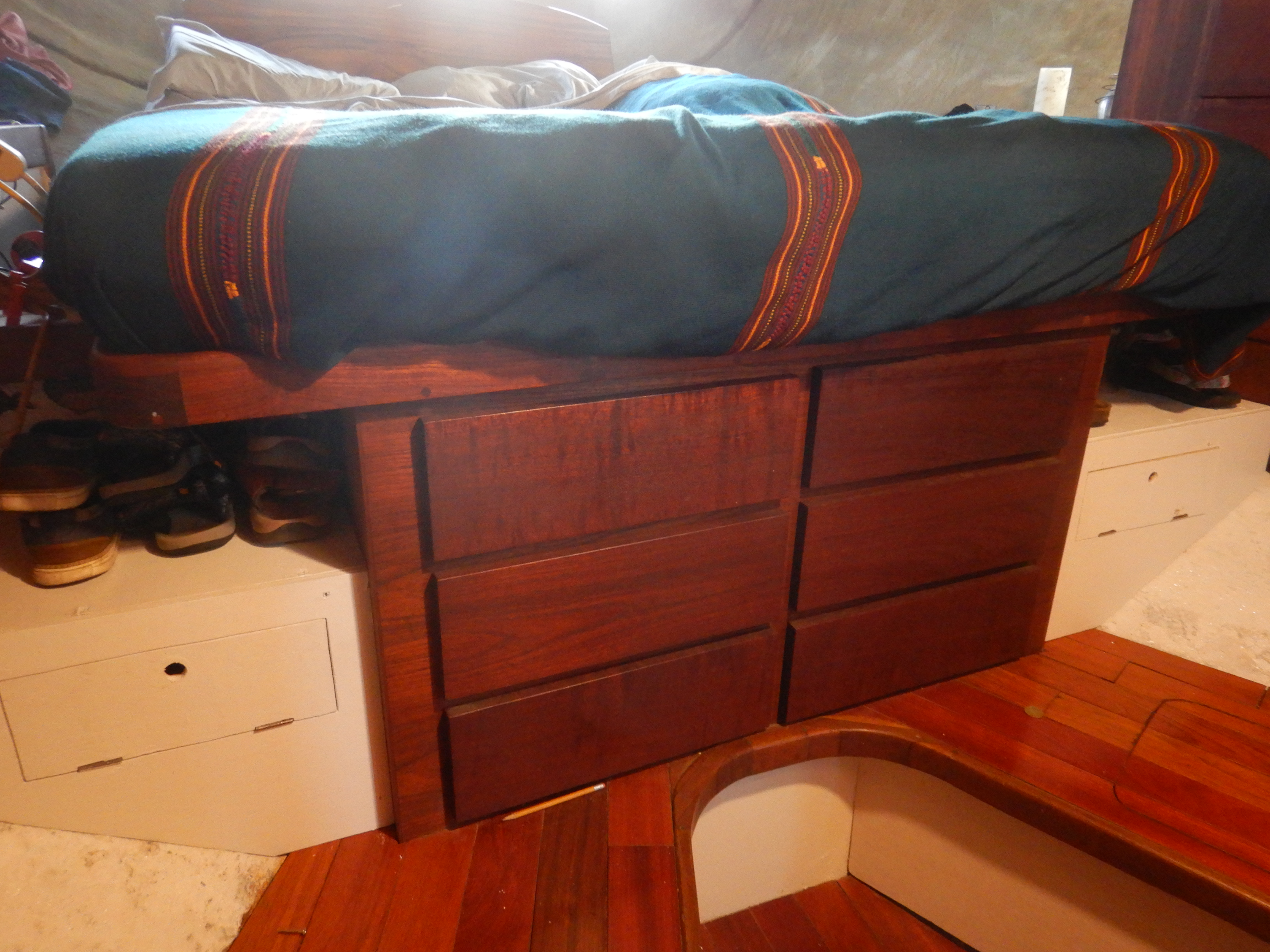 We’ve freshened up our pantry with a bright coat of paint and a better organization that allowed us to get some storage boxes off the floor. 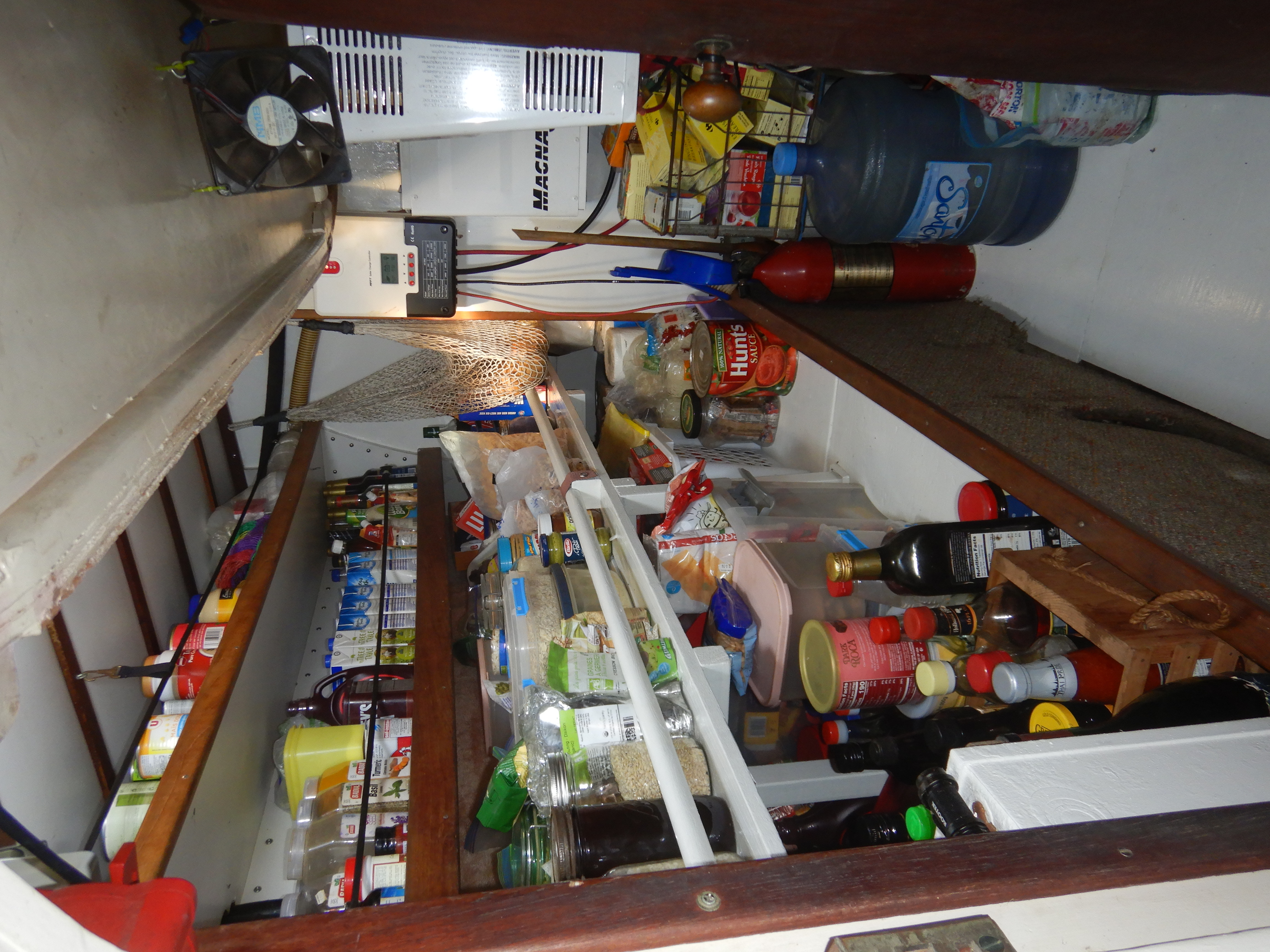 We’re chomping at the bit to get back underway out to the beautiful islands of the Tuamotus for another season of playing in the water! Kathy’s sister Jean and her boyfriend James have booked tickets to join us again in April, and our friend Jonnie will come for a visit immediately afterwards. And we’ve come to a big decision in the last week or two: we’ve decided not to stay a third year in French Polynesia, but to move on to New Zealand by the end of this year. While we love the pristine waters and dramatic scenery here, we have found ourselves feeling more isolated lately and think that the difficulty of learning French has kept us from making as many “connections” as we’d like. We’re ready to move on a bit and see if we can find more community somewhere further west…