The seasons continue to cycle, and winter is changing to spring here in the Southern Hemisphere. While that doesn’t correspond to snow and ice giving way to daffodils and cherry blossoms, we have noticed the days growing longer. We’ve also noticed changes from one year to the next, which are more likely related to the larger weather pattern called El Nino at one end of the spectrum and La Nina at the other. The world has spent the last few years leaning towards the El Nino, but has tipped the other direction this year. This means that the ocean’s surface waters are cooler than normal, and the trade winds blow stronger. We’ve had a steady parade of weather systems that locally are called “maramuus”. They bring strong winds, which then whip up steeper waves. 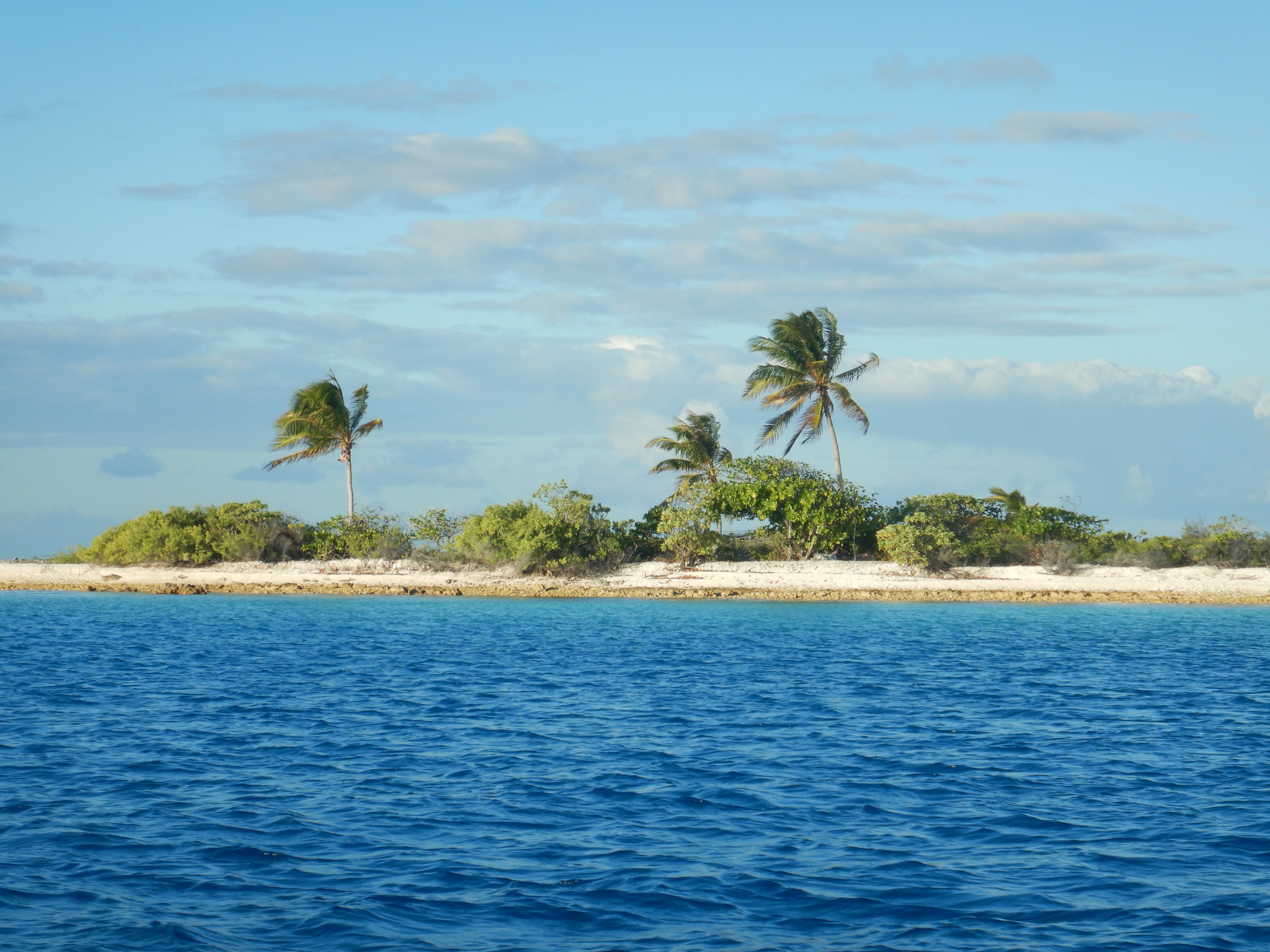 Nonetheless, we’ve done more travel in the last two months than the previous 8! In early July we finally broke our ties to Tahiti’s Port Phaeton. We motor-sailed up to the northern coast of Mo’orea, Tahiti’s nearest neighbor. Our friend Fabienne had just finished a hiking weekend with another friend, and we picked her up on the beach to spend several days with us. We enjoyed the transition to a more recreational balance, swimming around the boat and snorkeling in some pretty coral gardens. We also stopped at the spot where local tour operators feed the stingrays so they are comfortable around people. They swarm all around looking for food, kinda like squirrels in the park. 🙂 Another day we took a nice hike through some pineapple fields. The owner was out working with his two sons, and Fabienne was able to ask them about their lives on the island. They gave us a few pineapples that were too ripe for market – which were the sweetest we’ve ever tasted! 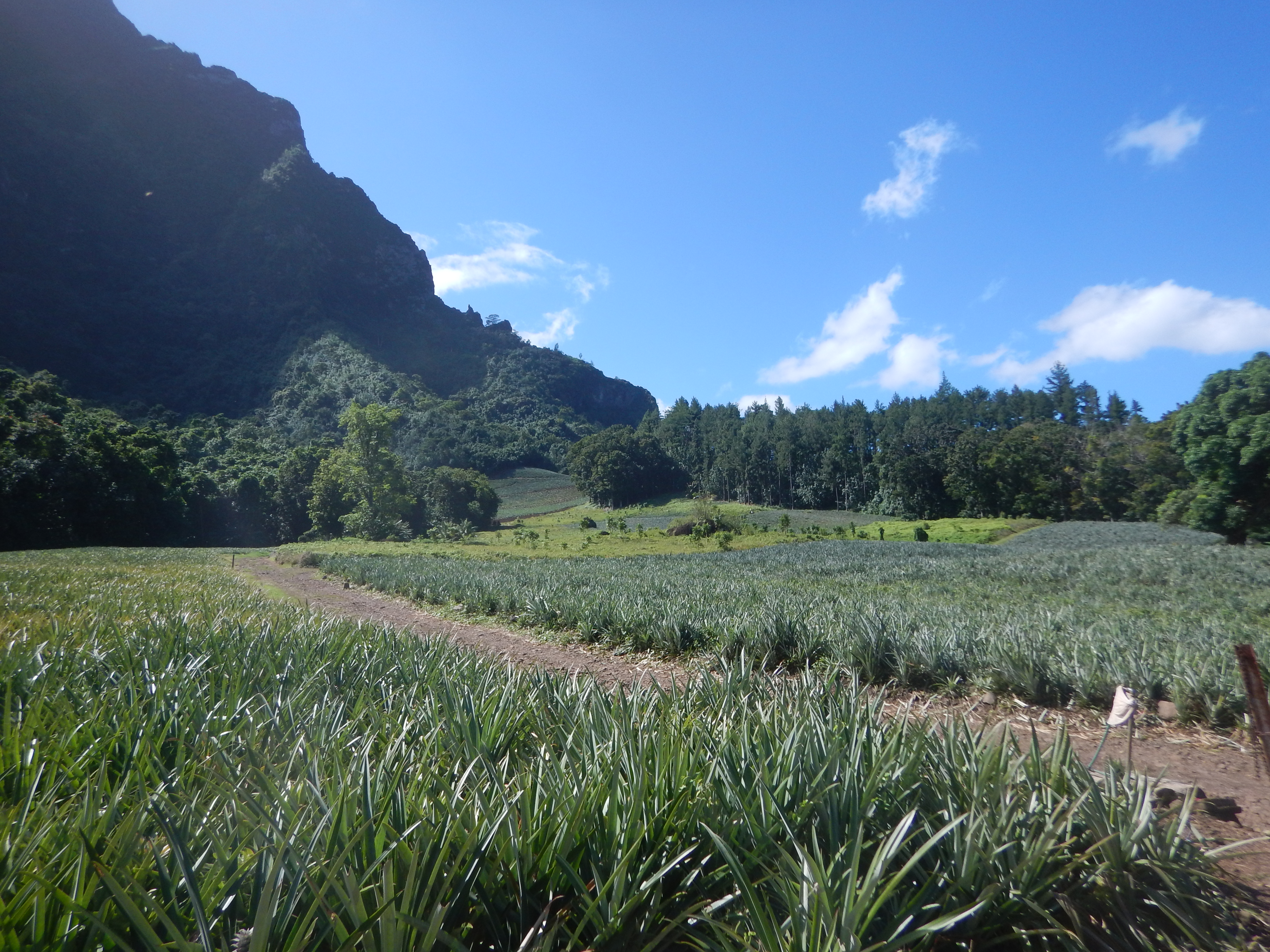 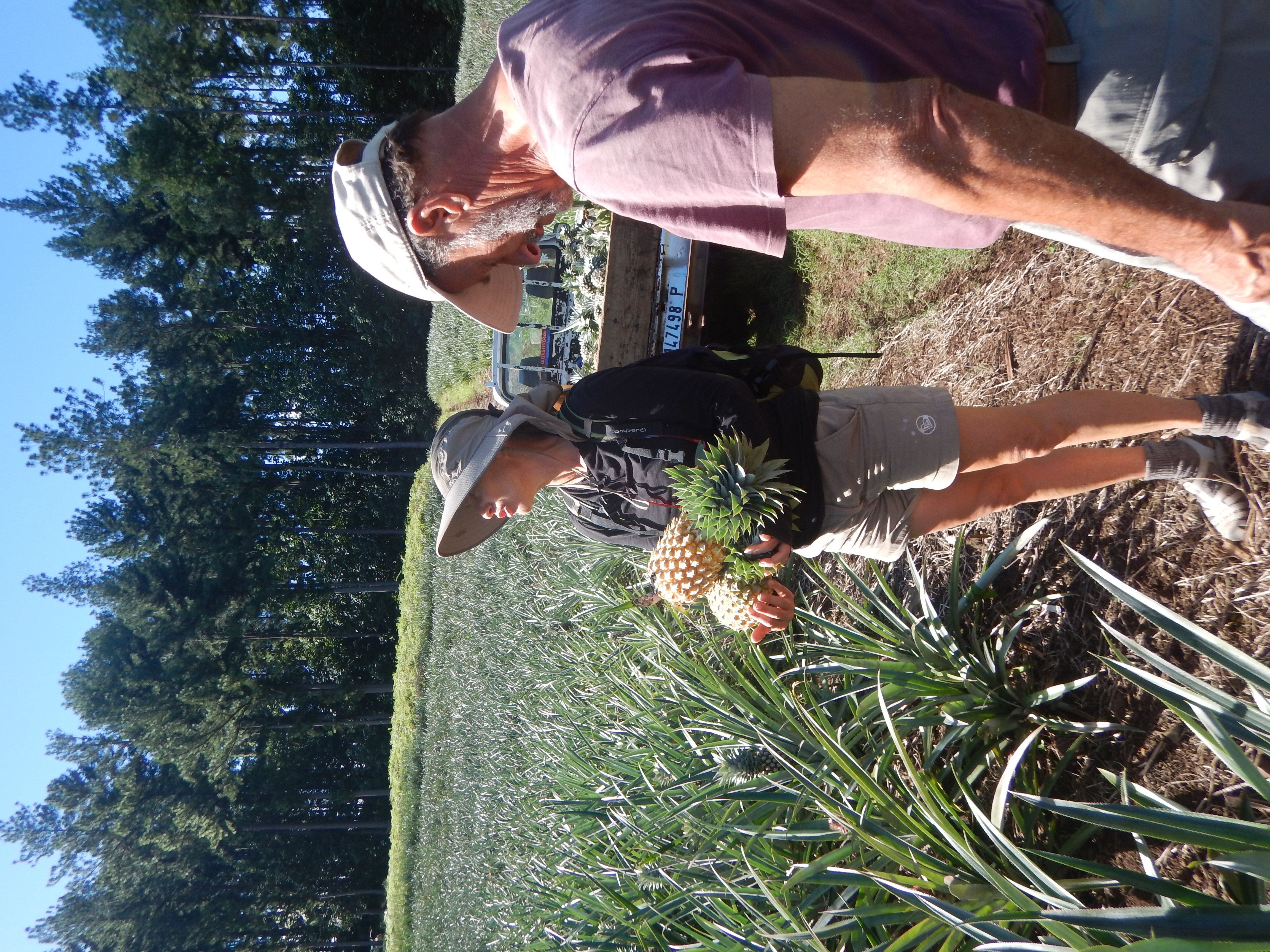 There’s a local shrimp farm that sells to the public on Wednesdays. We happened to stop by right as they were harvesting a fresh batch of shrimp, and we stayed to watch for about half an hour. They have a long net with a heavy chain tied along the bottom and a beefy rope along the top. One (big!) man walks into the pond with the rope looped around his waist, pulling the net to surround about a quarter of the pond. Then the team of three continued to pull the net together until all the shrimp were tightly contained. With birds swooping overhead hoping for a free meal, the team scooped the shrimp into net baskets, bringing in several hundred pounds of fresh catch which went onto ice immediately. 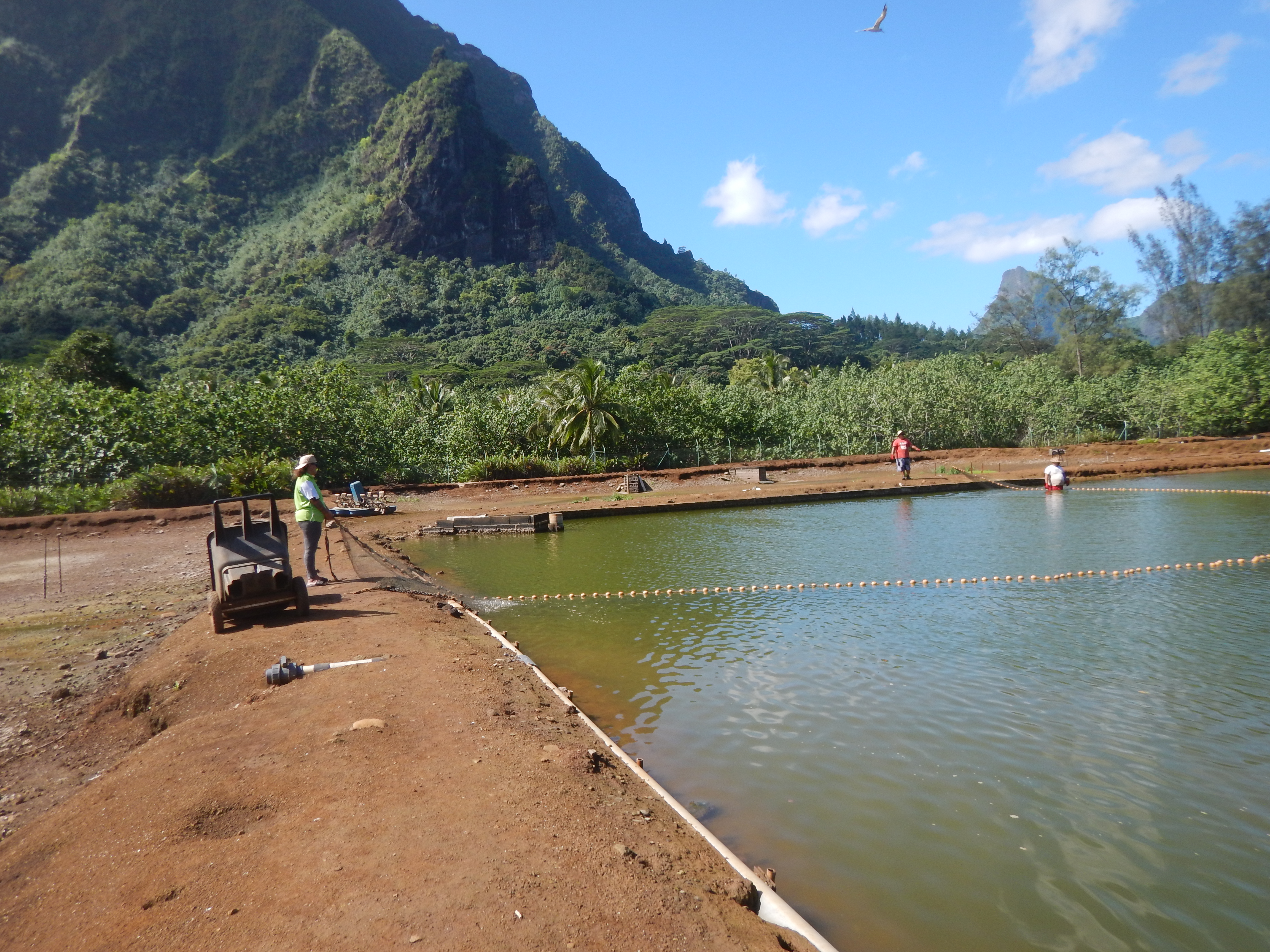 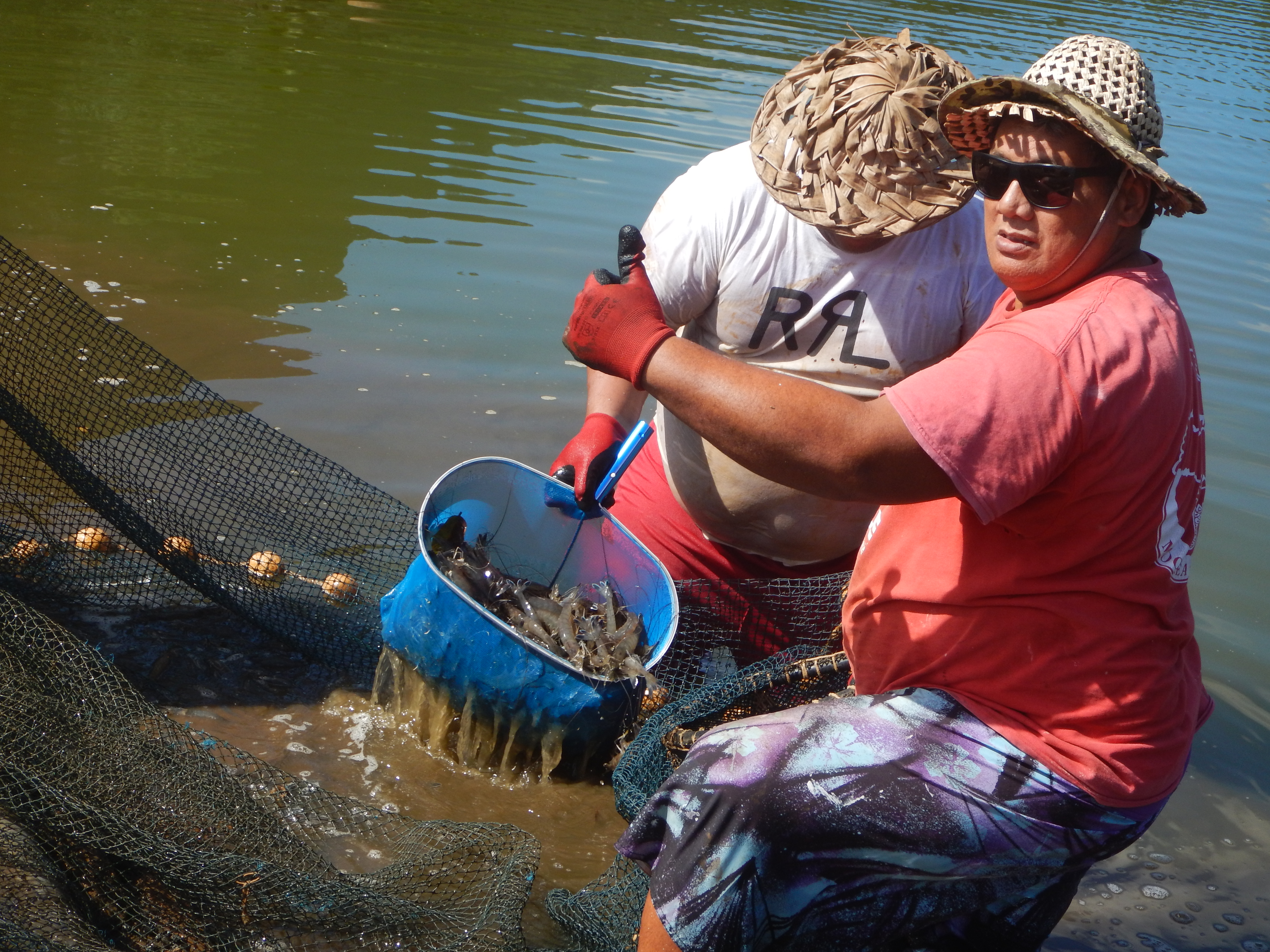 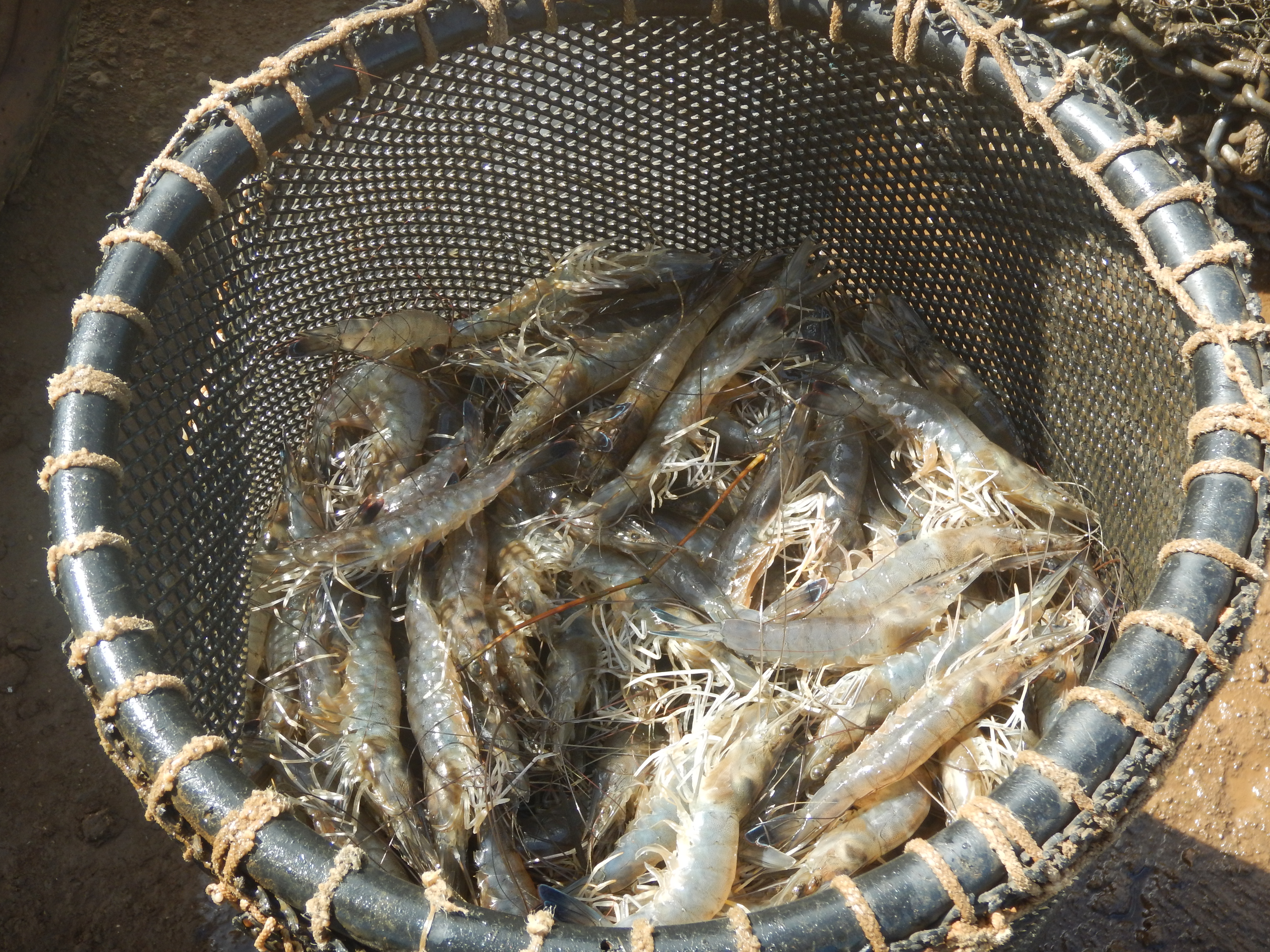 On Fabienne’s last day with us we dinghied to nearby Cook’s Bay where we all shared a pizza. She decided to walk the 10 miles back by road, while we did a little grocery shopping and then dinghied home in time to meet her at the beach again. The next day we dropped her at the bus stop on that same road, and she bussed to the ferry terminal for her return to Tahiti. She had a plane to catch to Paris (the first week they were flying again), and she was excited to be seeing her family again but nervous at the changes she might encounter from the pandemic. We were pleased to have shared a pleasant low-key visit, and we hope we’ll see her again – perhaps while we’re in the Tuamotus later this year!

Although we’ve spent time in several places since then, we’ve essentially been keeping our eyes open for a good weather window to sail to our favorite atoll in the Tuamotus ever since! We left Mo’orea several days after Fabienne left us, planning to stop at an anchorage in northern Tahiti for a couple of days to see friends on a few boats. We didn’t make it more than 5 miles the first day before ducking into the first bay we passed. The waves were so rough that we decided we’d jumped the gun and tucked in for an additional night. The next day we continued on to Tahiti, but it was so rough that we both got seasick — which hasn’t happened in many years. We enjoyed a few days of respite catching up with our friends on Mana Kai, Garulfo and Alila before once again jumping out into what we thought would be a good weather window — and once again we were disappointed! The weather forecast looked perfect, but the waves weren’t at all what had been predicted; they were much steeper, closer together and coming from several different directions, creating conditions like you might expect in your washing machine. We were getting knocked around so much that we couldn’t keep the sails full, so we ended up motoring the entire way — and we shortened our misery by a day by going to Fakarava instead of straight to Tahanea. What a relief to pull into the pass and out of the waves, after enduring 78 hours of running the hot, noisy, smelly motor. Ugh! A good night’s sleep was such a relief, a simple pleasure.

The next few days we spent cleaning up and repairing several things that broke underway. Our biggest “loss” of the trip was a bottle of Irish cream that we’d made, simulating Bailey’s with local whiskey, cream, instant coffee, chocolate, cinnamon & vanilla. It’s normally quite a treat, but one of the bottles was on the “cold shelf” of the fridge and got repeatedly slammed against the walls enough to break and spill its contents all down the walls to leak out the bottom onto the floor and the nearby 3-step stairway and the hold underneath both. By the time we were able to address the mess, it had dried into a sticky goo that was quickly starting to smell “funny”. We lost the prime on our main water pump for the house faucets, and it was surprisingly difficult to get it to “catch” again. We spent the better part of three days working on this, and some of our efforts resulted in rerouting some hoses in a way that’s much cleaner. Eventually we got it to work and are now feel a burst of self-satisfaction at hearing the pump turn on and off whenever we move the faucet handle. 🙂 The next biggest repair was to replace some broken bolts that connect the plank and rails to the bowsprit.

We have been hanging out in Fakarava ever since — a full month! — although we’ve changed location several times as the weather and our larder require. The town at the northern end of the island is where the supply ship comes in weekly. Last week, though, we were out of luck. A different, larger ship showed up and spent the morning off-loading large tanks of fuel — but nothing for our bellies! We did top off our tanks, just days before the expiration of our certificate to get it duty-free. That saved us a couple hundred $$, so the timing was great! We’ll return this week to reprovision, hopefully for our passage to Tahanea!

We’ve spent much of our time here at a couple of spots about halfway along the northern perimeter of the atoll. There’s only a rough road that runs just about to this location, so there’s virtually no one around. There are a few nice clusters of coral bommies that are nice to snorkel around, and the water is beautiful! The only down-side is that it’s still a bit chilly, which has deterred us from spending time there every day — I think our skin has gotten thin. 🙂 We’ve gone ashore to scavenge for coconuts and beachcomb along the ocean-facing shore several times. Back when we were in Tahiti, we bought a tiny mint plant at a weekend flea market. Dan has been excitedly nurturing that little guy, and it grew so well that it needed to be moved to a bigger pot, much like a hermit crab needs to move up to a larger shell from time to time. We brought a bucket and scooped up some dirt from under a canopy of coconut palms to accomplish that project. 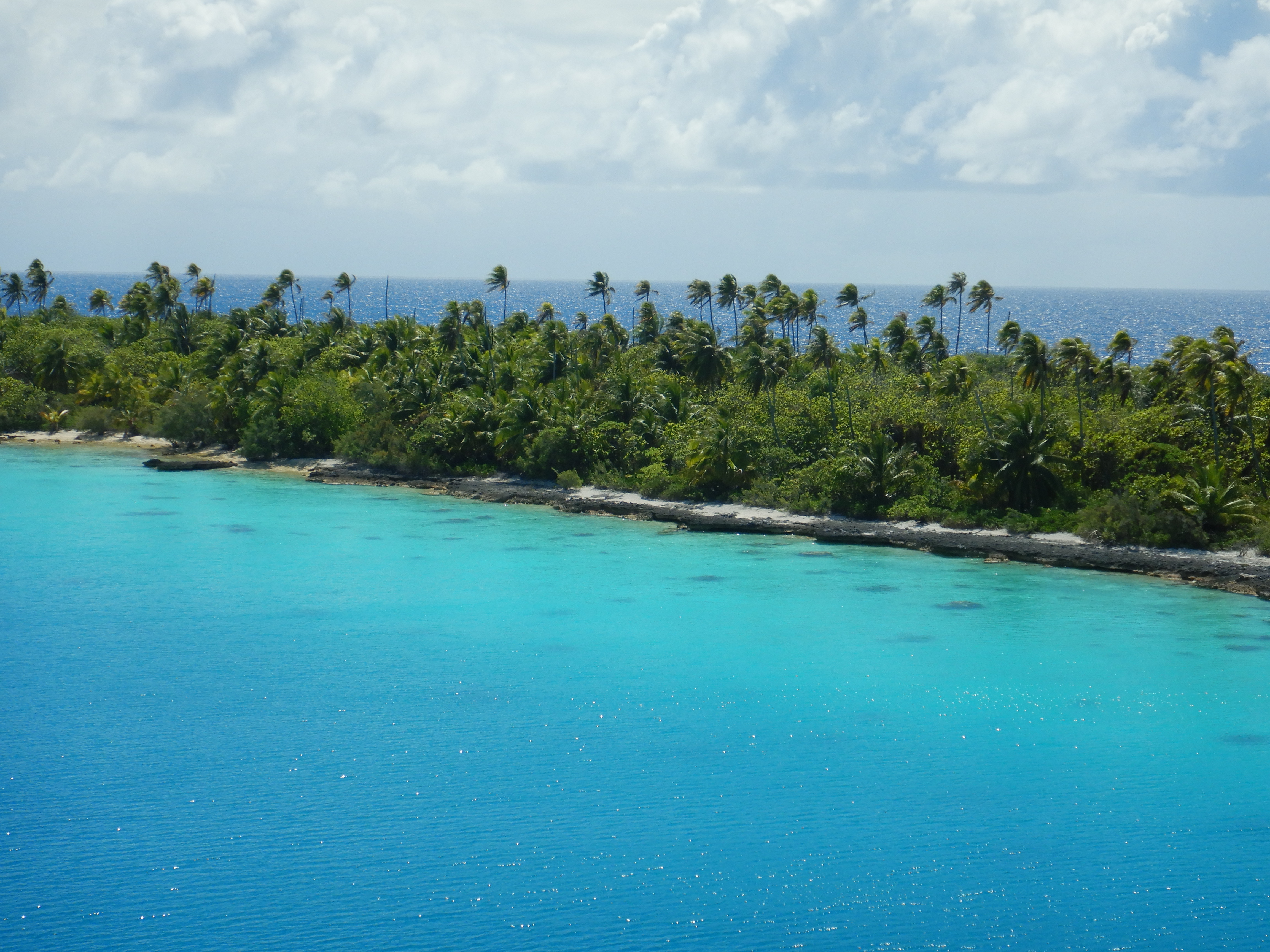 This low-land perimeter is technically composed of a series of motus, small islands, but the gaps between the motus making up the northern edge of Fakarava are pretty minimal. Many places around the other sections of this atoll are comprised only of reef that is mostly underwater, but wide enough that waves from the outside are broken up before they come in. The terrain of the perimeter is surprisingly variable from one place along the atoll to another. Some places are fairly lush, while others are barren and rocky. There are sandy beaches, inlets in the rock that appear to have been hand-hewn, and even some areas that appear marshy, where shallow pools have appeared inland. We love to poke around them all, sometimes bringing home “treasures”, sometimes only photos or memories! 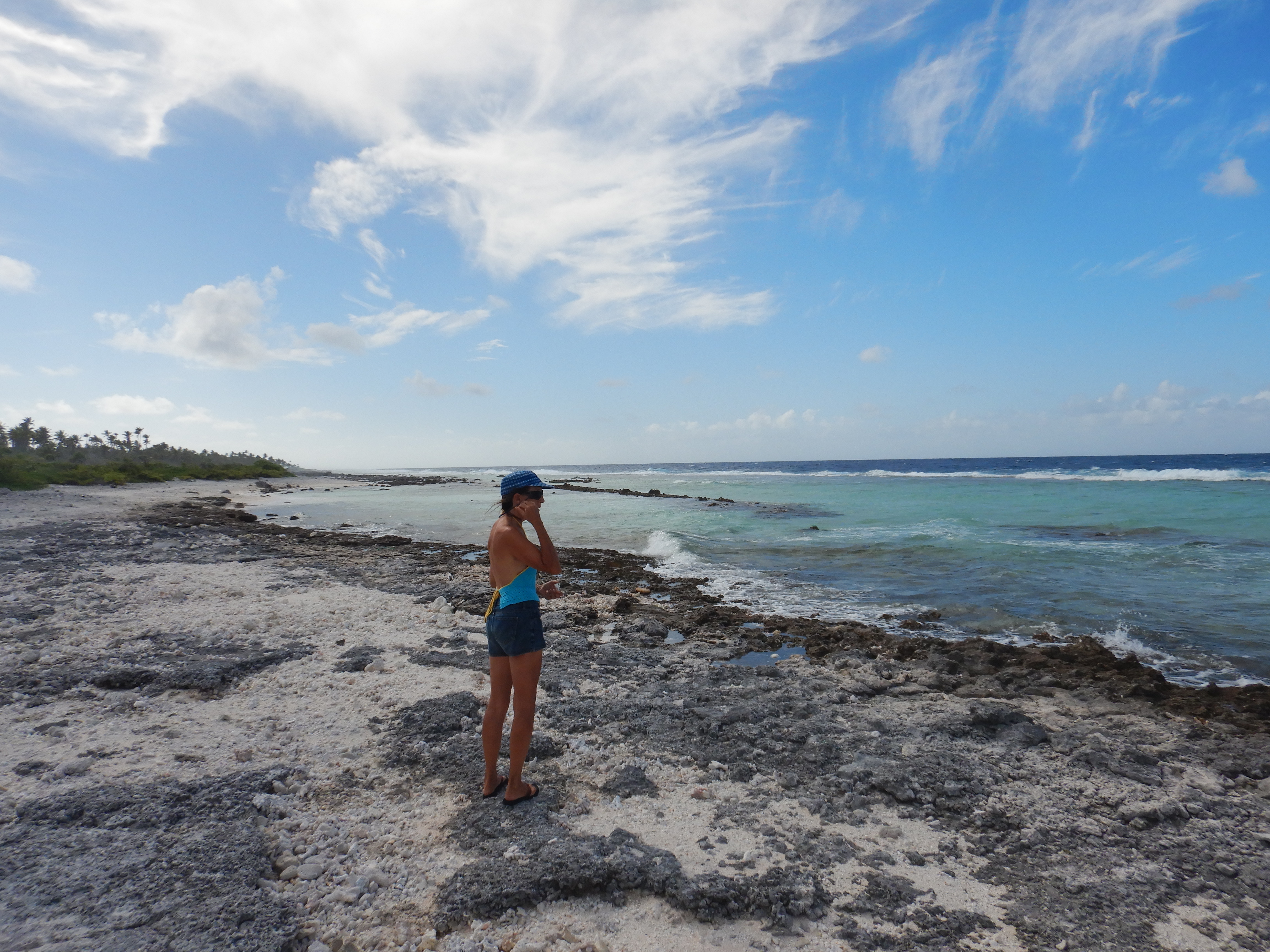 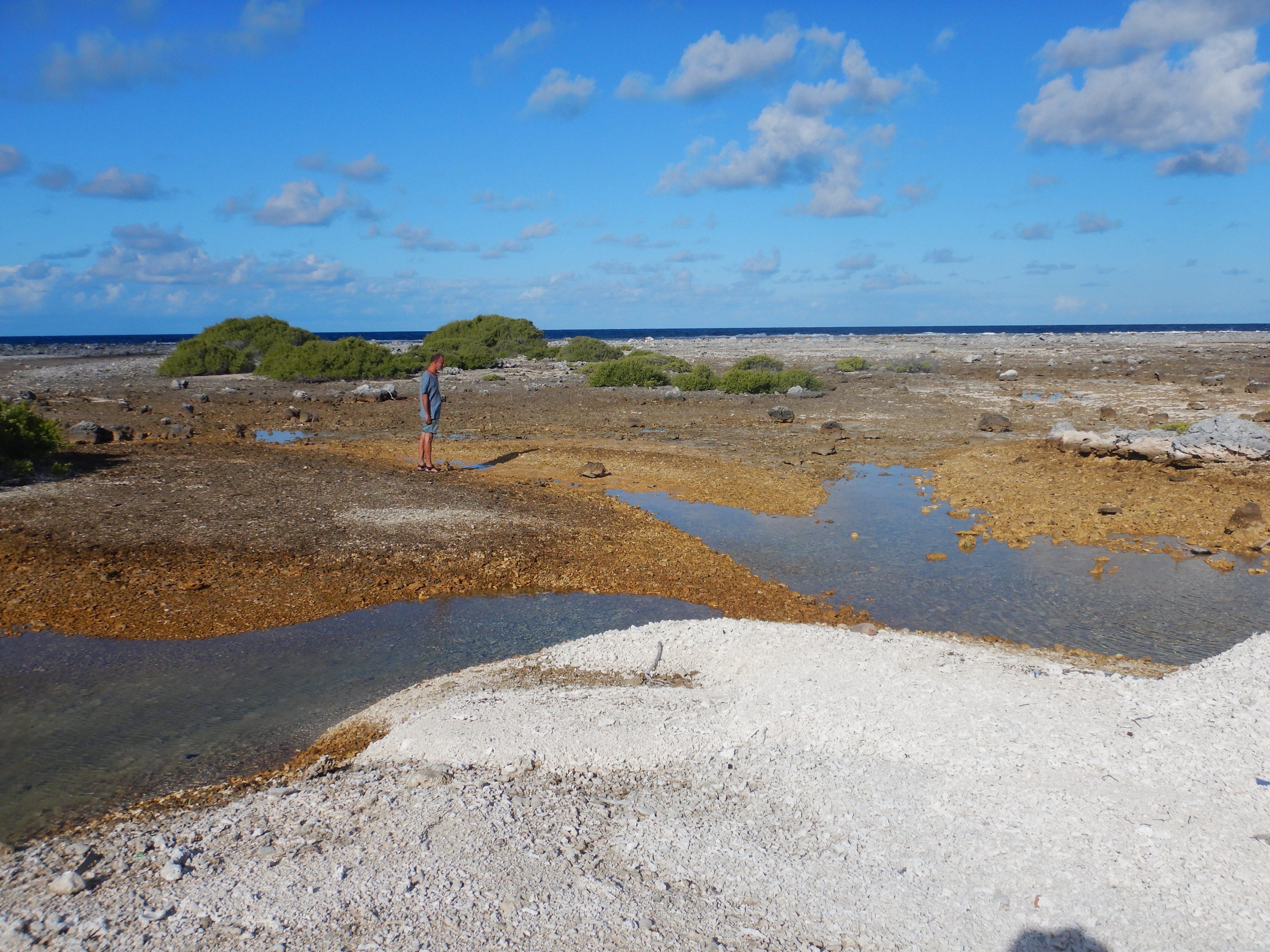 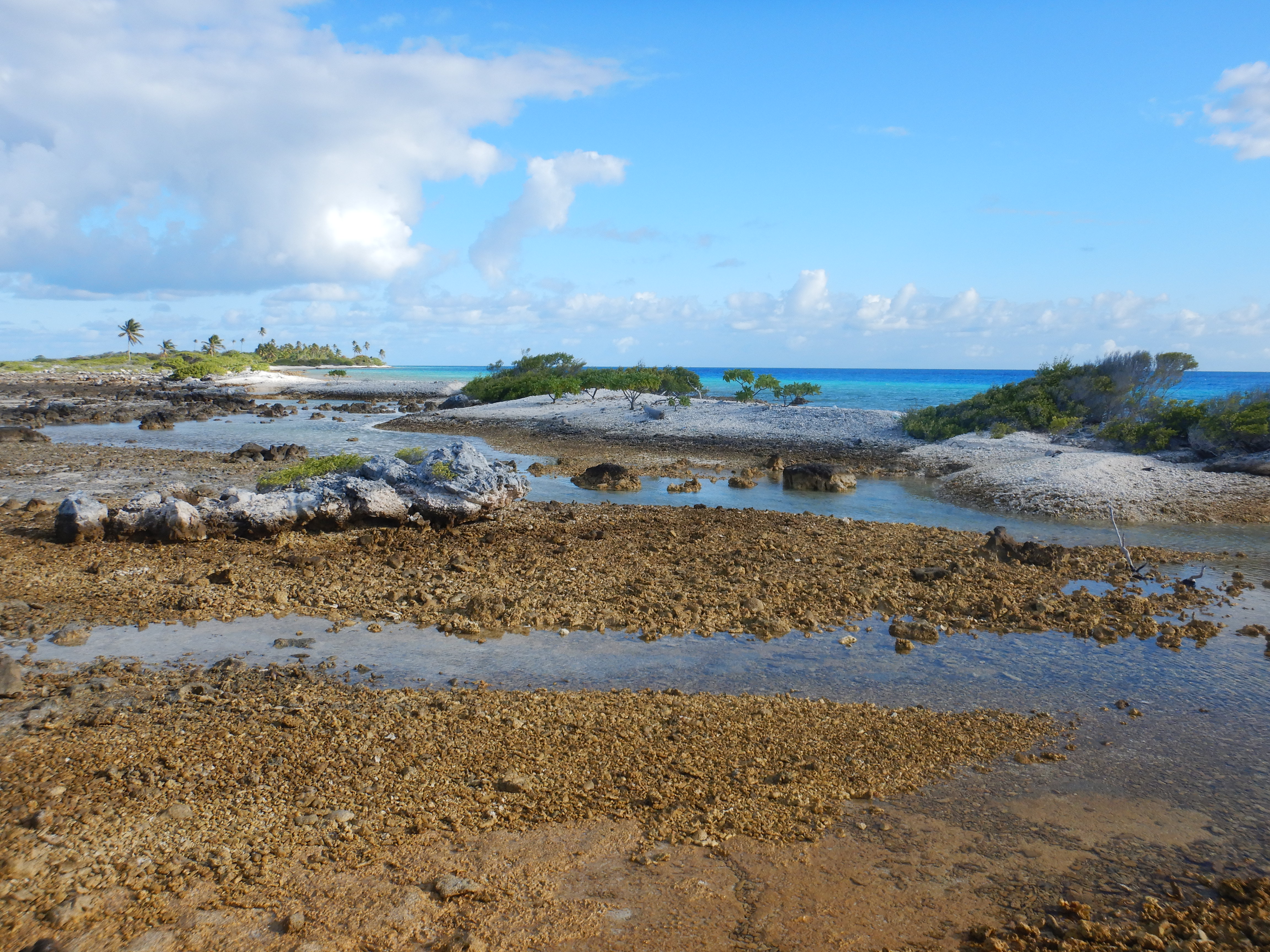 We’ve enjoyed watching the sky throughout the day, but especially at sunset. The skies here are really big, since the land is so low, and the clouds vary dramatically from one day to the next. We’ve watched the moon go through all of its phases from a glorious full moon dwindling down to a sliver, then the amazing dark night with sparkling stars that bring tears to your eyes. Then we watch the return of the moon, as it grows bit by bit to mark the passing of another month. How did it get to be September?

We’ve been following the news here and abroad, especially about the coronavirus pandemic. While some places have had some measure of success getting it under control, many of them have had second surges that have set them back. French Polynesia is now in that category. In the last several weeks the virus has gained a foothold here, and there are now about 500 people in French Polynesia who have been infected. The health authorities have worked hard to do contact tracing, but it has gotten ahead of them, and now some cases have appeared that don’t belong to known clusters. This is a worrisome situation, because it means that it is moving through the population undetected and unchecked. So far it is contained to three of the more populated islands, and we feel fortunate to have gotten to Fakarava before it erupted in Tahiti. We hope it will not spread to Fakarava, but also hope to be in Tahanea soon to reduce our risk. Like everyone, we hope to avoid first-hand experience with Covid. We wish the same for all of our friends and family, and indeed everyone out there! Stay safe, stay healthy, stay happy.