We’ve returned to the town in Fakarava to reprovision after 7 weeks hanging out in Tahanea – which is what we’d been looking forward to for months! We moved around a little bit while we were there, mostly in reaction to weather, starting in our favorite spot, affectionately known as “the 7”. It was given this nickname because when viewed from a satellite the reef forms the shape of the numeral seven, although that’s not at all apparent from sea level. It’s a beautiful little corner of the planet that only a very small number of people have ever seen. We have already visited 3 or 4 times, and were drawn back again to hang out for an extended period. It’s one of our favorite places ever! 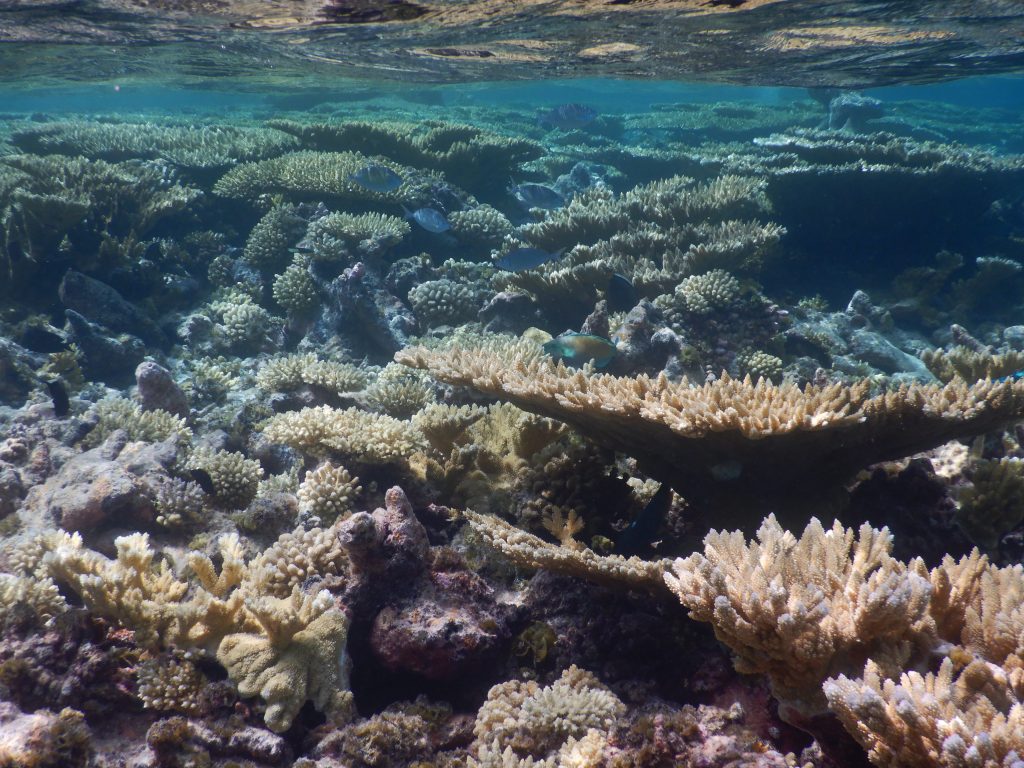 There are two little islands located about a mile away, on the ring of reef that forms the atoll. We dinghied over there a few times to look for coconuts and just wander around. Apparently it’s the nesting season for the booby birds, and we saw a number of nests in the scrubby trees with faces curiously peering out at us. We identified 6 different types of birds on this island, although we couldn’t tell you the full names of them all. There are boobies, frigates, oyster-catchers, 2 types of terns and a small guy who prefers to run along the beach than to soar with the others. One of the terns is dusky grey with a white cap on his head; we often see them fishing in flocks ranging from six to a couple dozen, delicately picking small fry from the surface of the water. The other type is snowy white, easily disturbed when we come ashore – they take to the air to watch us suspiciously as we wander around the island. But they are strikingly beautiful, fluttering overhead looking like a messenger from the angels. 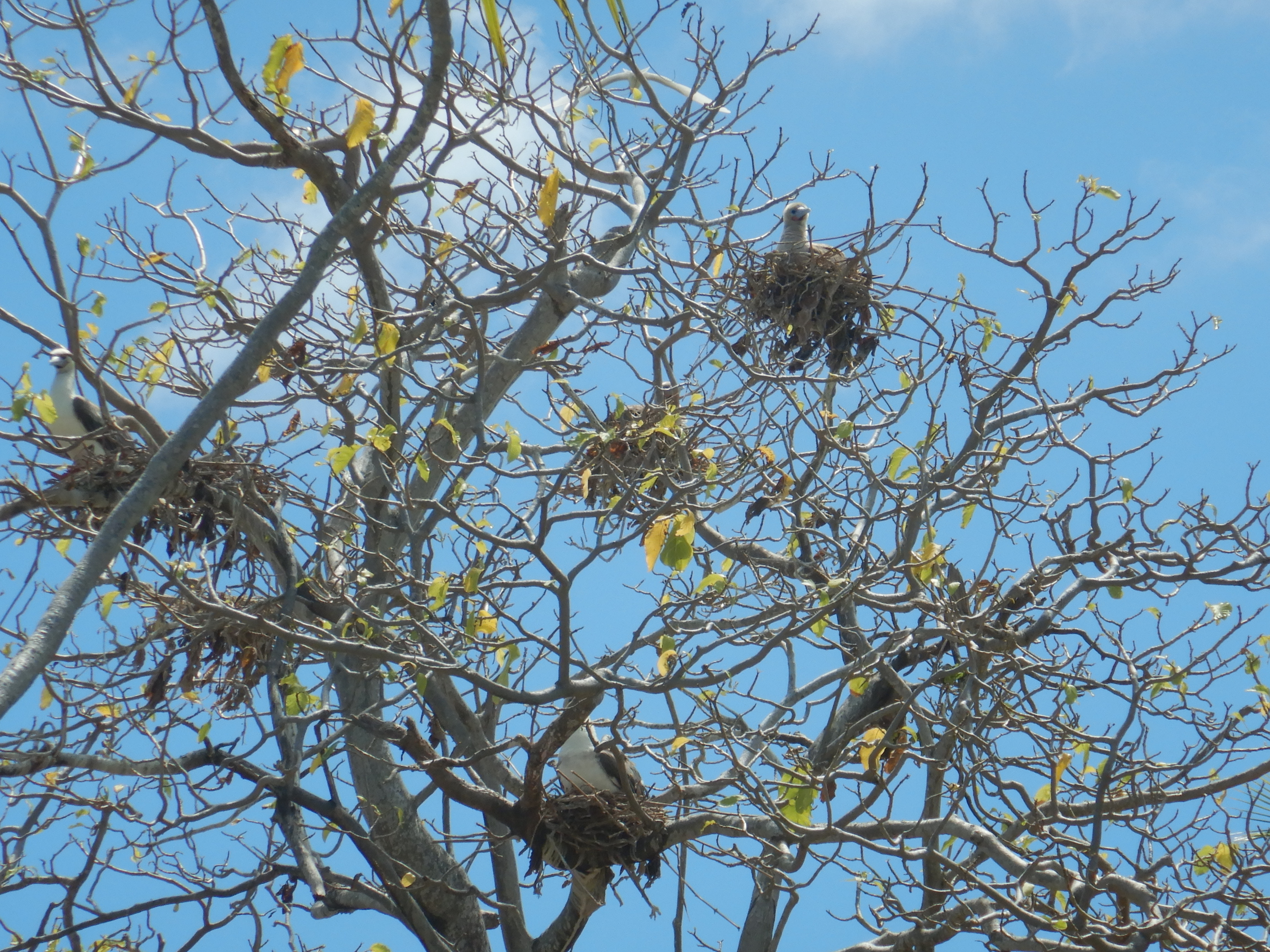 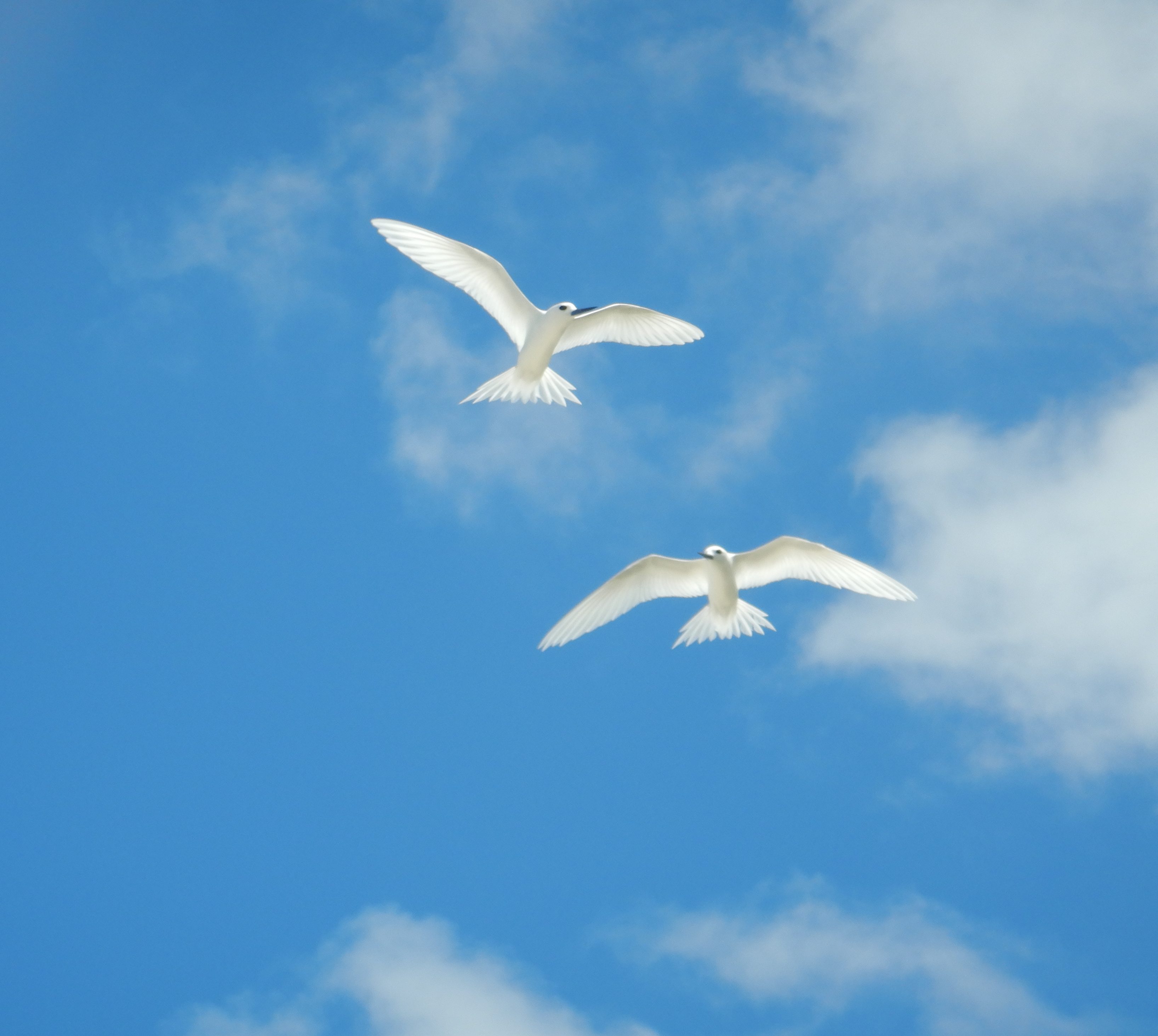 The waters of Tahanea are lovely, sporting a color palette that will take your breath away. You can tell the depth of the water by the color, which typically ranges from dark blue through deep turquoise to the pale green of old window glass. In areas with coral heads you can easily pick them out in waters up to 50 feet deep – as long as the sun is overhead and unobstructed by clouds! This is crucial for boaters like us travelling here because the charts typically don’t give much detail about the lagoons of these atolls. When we are travelling from one anchorage to another in a new place, we take turns with one person standing out on the bowsprit watching for these bommies to avoid, while the other is at the helm. 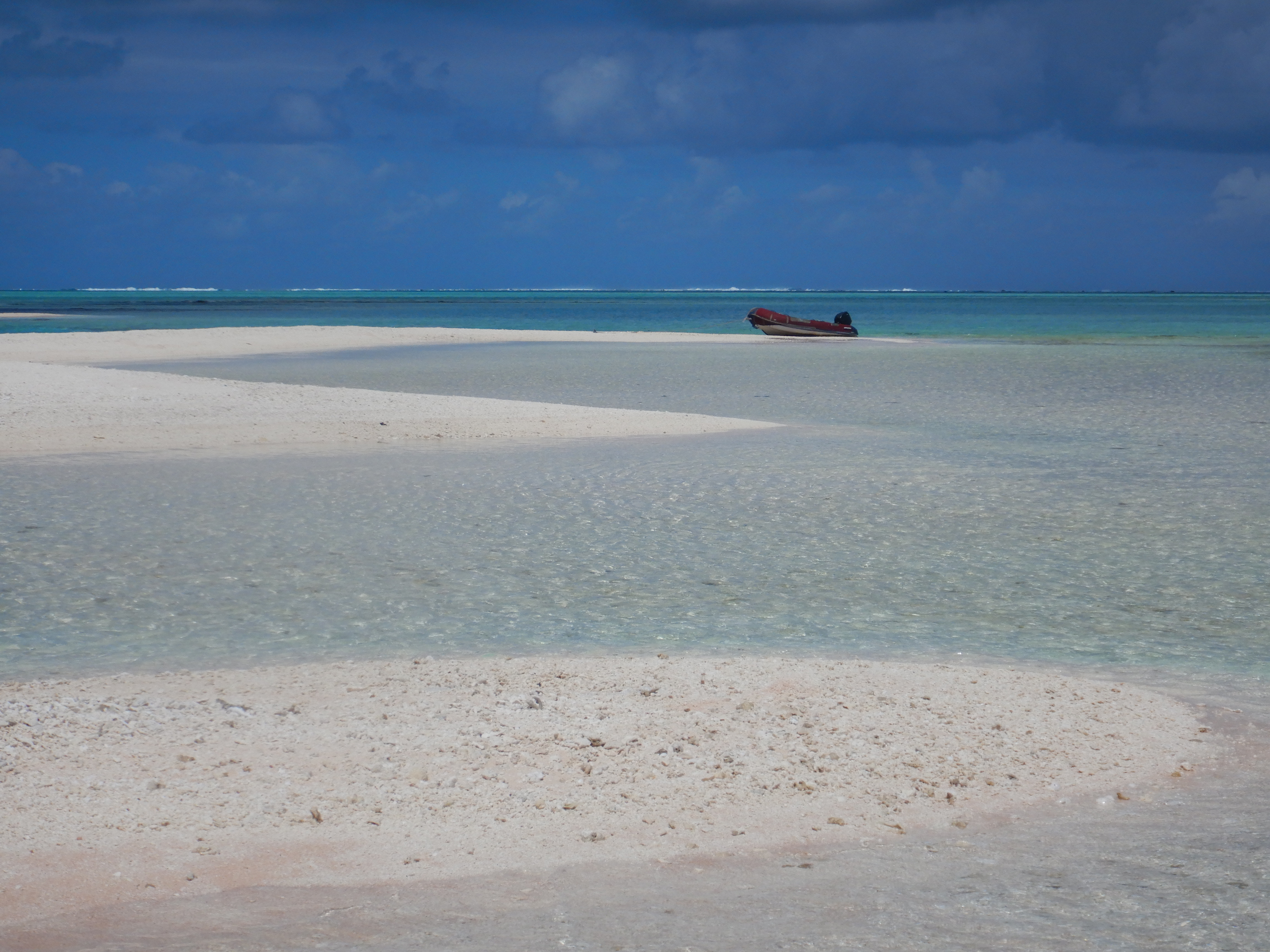 We love to snorkel and swim while we’re here. Even though the weather this year has been much windier than the previous two seasons we’ve visited Tahanea, creating waves that can make swimming uncomfortable, and the water is notably chillier, we’ve gotten in the water fairly often – initially just swimming from the boat to the closest sandbar and back (about a half mile roundtrip), and later going out to the reef that forms the “7” for a longer snorkel. Most of the time we take the dinghy from Lungta when we go exploring. Some anchorages have a coral bommie so close you can just swim there from the boat – Kathy likes to call that our “house bommie”. The anchorage near the entrance of Tahanea has a nice “house bommie” like that, as does the town of Rotoava, in Fakarava. Fortunately, as the weeks have gone by, the weather has begun to warm up (with the approach of southern-hemisphere summer), and our times in the water have started to become longer and more frequent. There are gazillions of small colorful fish flitting about, ducking in and out of holes in the coral, schools of like-minded fish hanging out together close to the coral or out in the deeper water, and larger individuals (including fish, sharks, rays, and others) roaming around or making cameo appearances. 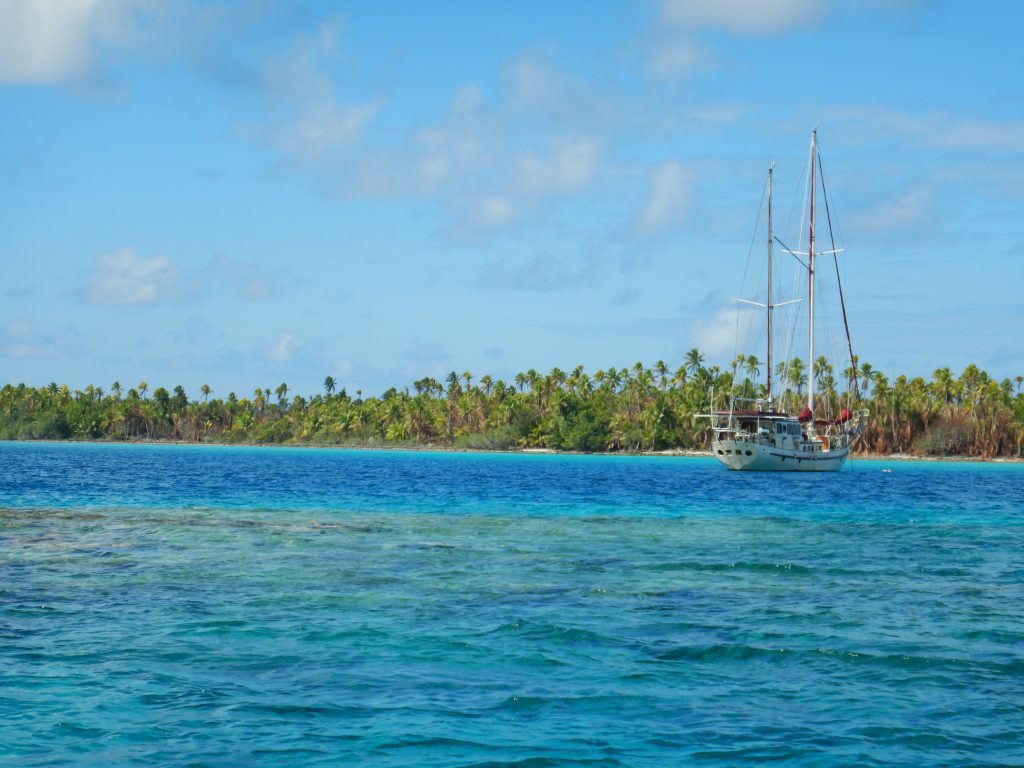 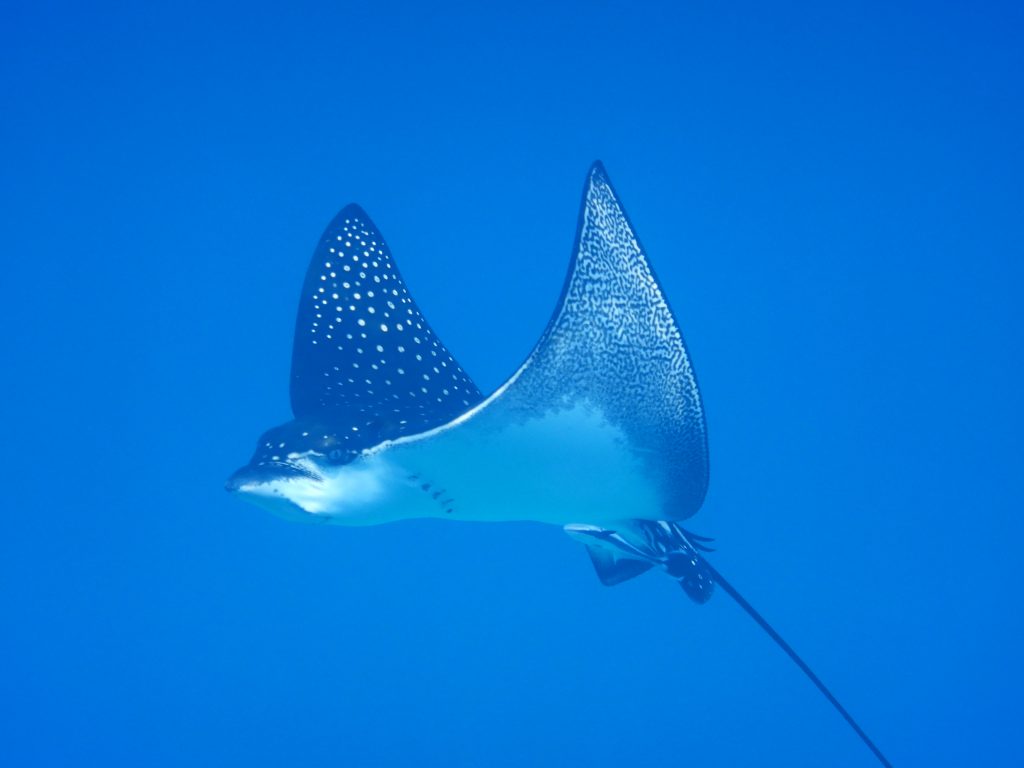 The weather has been changing frequently, with gaps in the stronger winds, changes in the direction, and occasional rain showers. After we were at the 7 anchorage for almost 3 weeks the forecasts showed a period of stronger winds from a different direction, one that wasn’t as good for this location. So we motored the boat 10 miles from our spot on the southern coastline to a place on the SE corner, which provided better protection from the winds – and more importantly, the waves that they whip up. We stayed at this location for another three weeks, occasionally taking a dinghy ride to explore one of the three small islands (the local word is “motu”). Tahanea is “famous” for having pink sand, and the color was quite pronounced here. It’s sort of a “dusky rose” shade of pink. We collected a bit of it and used it as anti-skid in our shower. 🙂 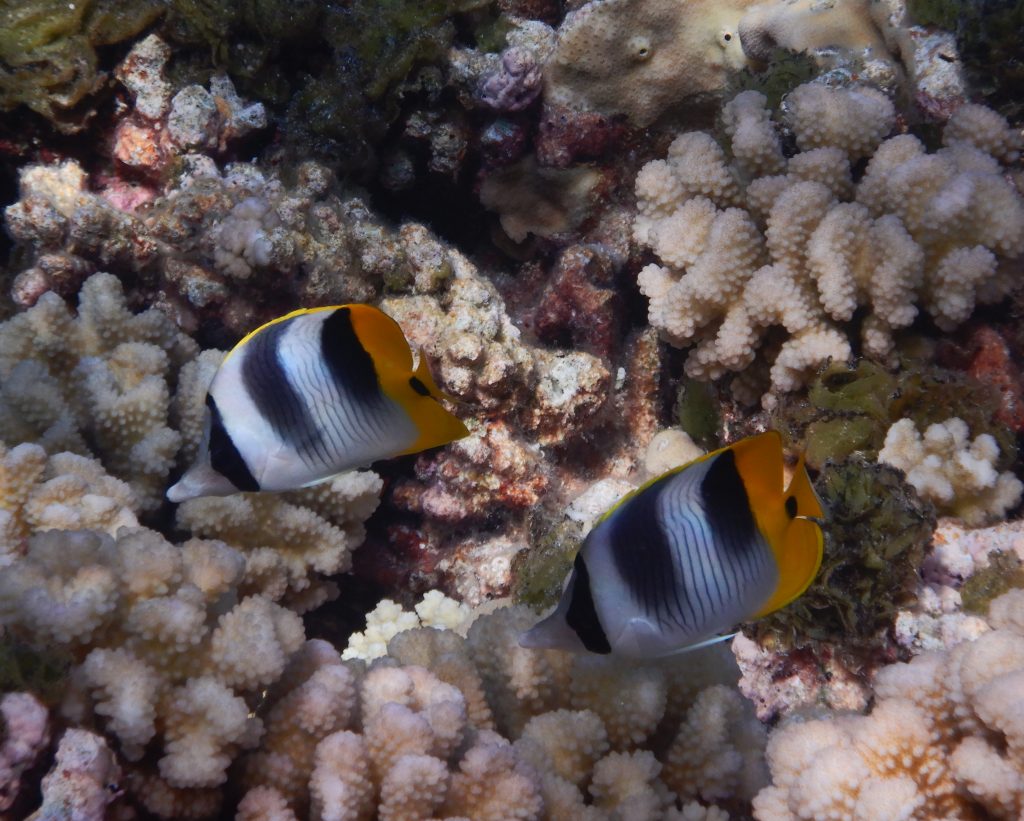 We’ve recently put in place a new process, making customizations for the unique boat that is Lungta. When anchoring in places with bommies, there’s a risk of the chain getting snagged or even wrapped around one of them if/when the wind changes direction. The longer one stays in the same place, the more likely this becomes. It can be difficult to untangle, especially if you are in deeper water or unable for any reason to dive down to move it around by hand. This can be dangerous if it prevents you from pulling up the anchor in an emergency or if it shortens the amount of chain that is needed to absorb the forces of the rhythmic push and pull of the waves on the hull. Many experienced boaters come up with a system of floats to hold the closest portion of the chain up off the ground, suspended above those pernicious coral heads. Here in French Polynesia, one can occasionally find washed up on the beaches plastic balls which have somehow been lost from pearl farms (that use them to hold up the cages where the pearl oysters are suspended in the water column while the famous black pearls are being grown). Boaters collect a group of them and string them out along the length of their anchor chain as they’re deploying the anchor. Lungta has a heavier chain than most of our peers out here, so we’ve found that we need to use clusters of 2-3 of these balls for each section of chain that we want to float. We’ve only gathered 5 of the pearl farm balls so far, so we only have 2 clusters. We place them about 20 feet apart and about 30 feet from the boat. The first time we did it, we placed them further apart, and they got tangled up when the weight of the chain in between actually caused the two clusters to pull together. Our process seems to work well, and helps to make our anchoring process just a bit more reliable. 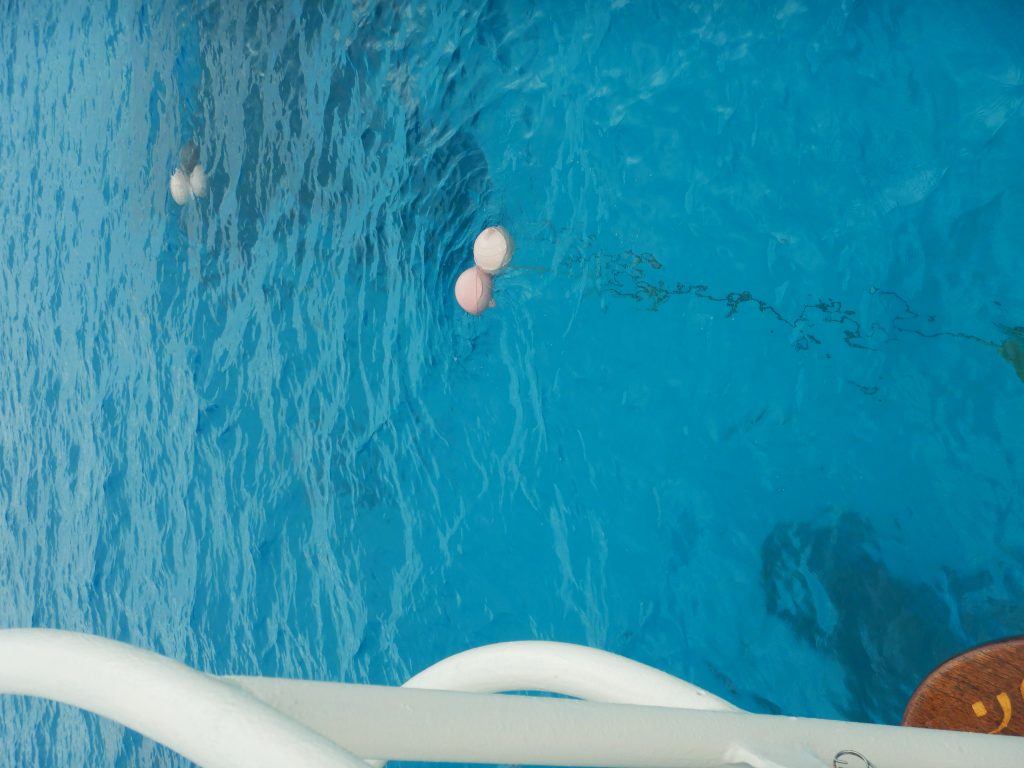 Another project that we’ve been working on is painting the steel cables supporting the masts with a roofing product that is based on tar. It’s pretty sticky for a while, but we hope that it will stop the rusting that has begun. Kathy goes up to do the dirty work, while Dan does the heavy lifting of cranking her up using the winches. We’re typically doing two wires in one session, taking somewhere between 90 minutes and 2.5 hours. We look for super calm days, both because it’s more comfortable and because it minimizes the drips all over the deck. 🙂 We’ve got the first coat on 10 wires, and have at least 5 more (there are 2 others that we haven’t yet decided whether we’ll do them, because they have sails that slide up and down them, and the coating might just scrape right off). This is something that used to be done traditionally, but is rarely done any more, because most boats use stainless steel or lines made of high-tech “plastic” material. The look of the black wires is kinda cool! 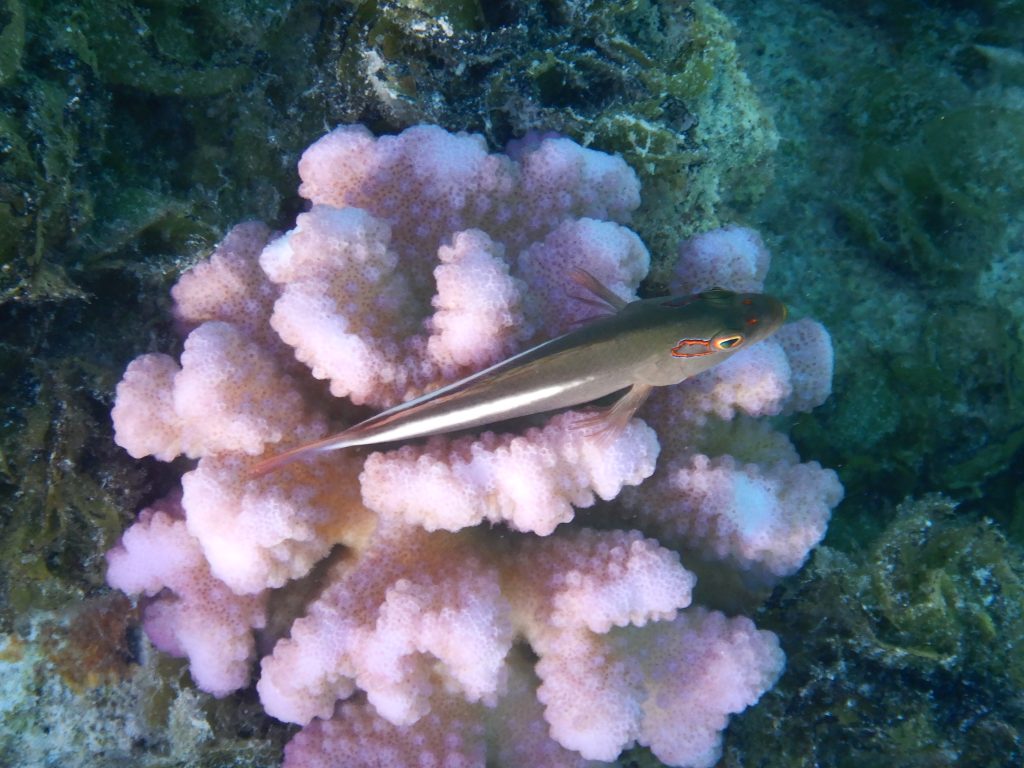 As (southern hemisphere) winter gives way to summer, the days are getting longer. Our new solar panels are producing so much more power than we’ve ever had before, that our batteries are often charged by noon. We’ve tweaked the program that controls our freezer, asking it to super-cool the freezer when there’s excess power. That allows the freezer to go through the entire night without running at all, meaning that we wake up with a still cold freezer and batteries that aren’t thirsty. It’s a big shift! We used to run the generator for an hour or two most days, to top up the batteries before going to bed. Now we’re hardly running it at all – we’ve set a reminder to start it up periodically as a maintenance task. Since all the power in our batteries these days is coming from solar, we’ve been joking about using our solar blender and solar sander – and making solar ice cubes in our solar freezer! 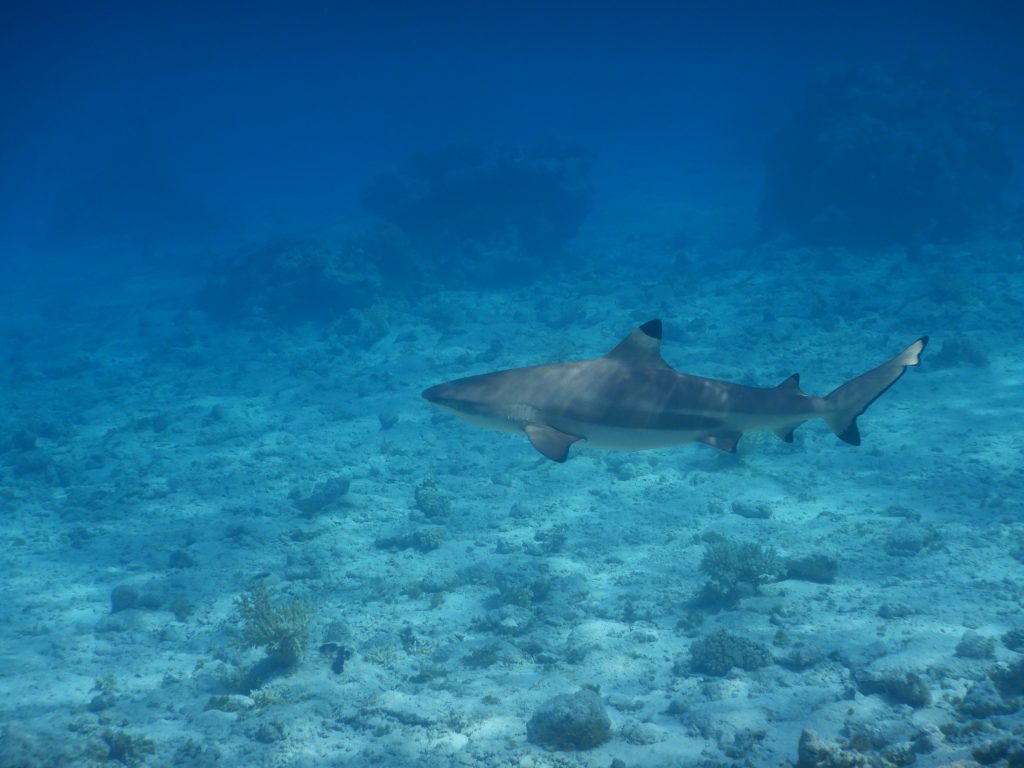 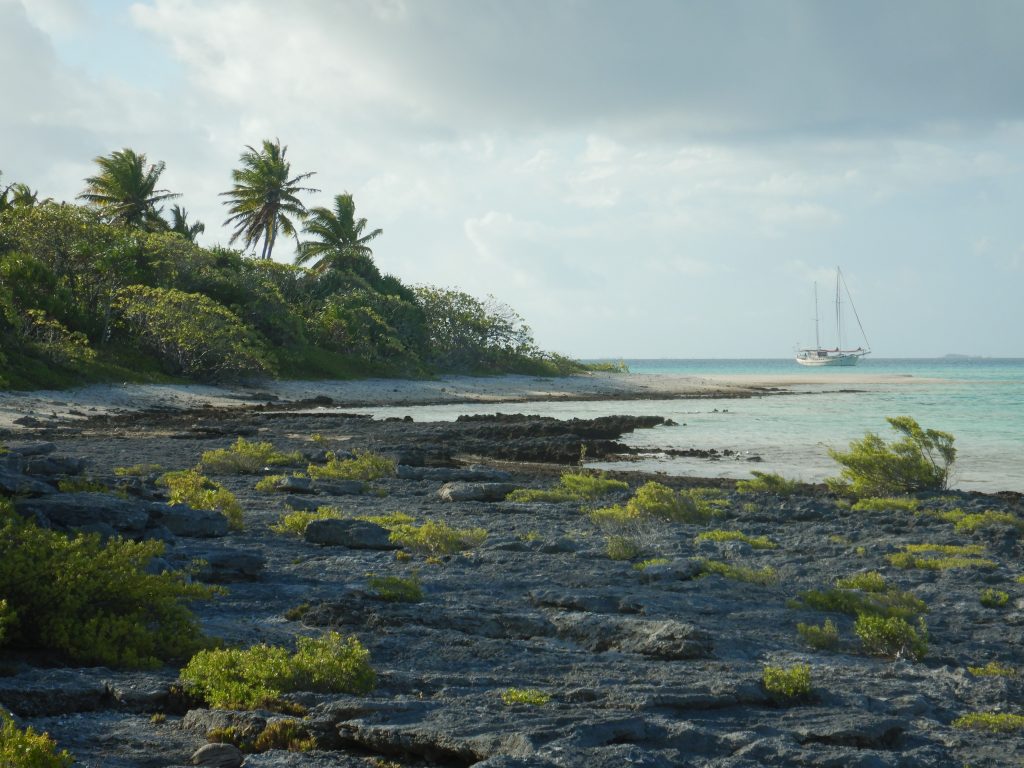 We returned to the 7 anchorage for a week before starting to make our way back to Fakarava to replenish our food stores. We’re spending more time in the water as the days warm up a bit and the clouds back down more, allowing the sun to light up the coral reefs. The water here is so clear that it’s really stunning to have lots of light! We snorkeled and watched the sunsets and even slept on deck one night under the stars – when we both spotted 3 or 4 shooting stars! Next we moved up to the anchorage near the pass in the coral ring surrounding the lagoon, where we stayed for three nights waiting for the best weather conditions. Then we got up early one morning and pulled our anchor again to depart on a 7am tide. The winds on our passage were pretty nice, although the seas were a bit bumpy from previous winds. We arrived without incident in Fakarava the very next morning and here we are! We’re anchored near another “house bommie”, so we’ll continue to enjoy the snorkeling while we’re here. We expect to only stay a week or so though – enough time to catch up on the (election) news, reconnect with friends & family (electronically), and restock our larder, then we’ll be off again to some remote atoll for about a month. 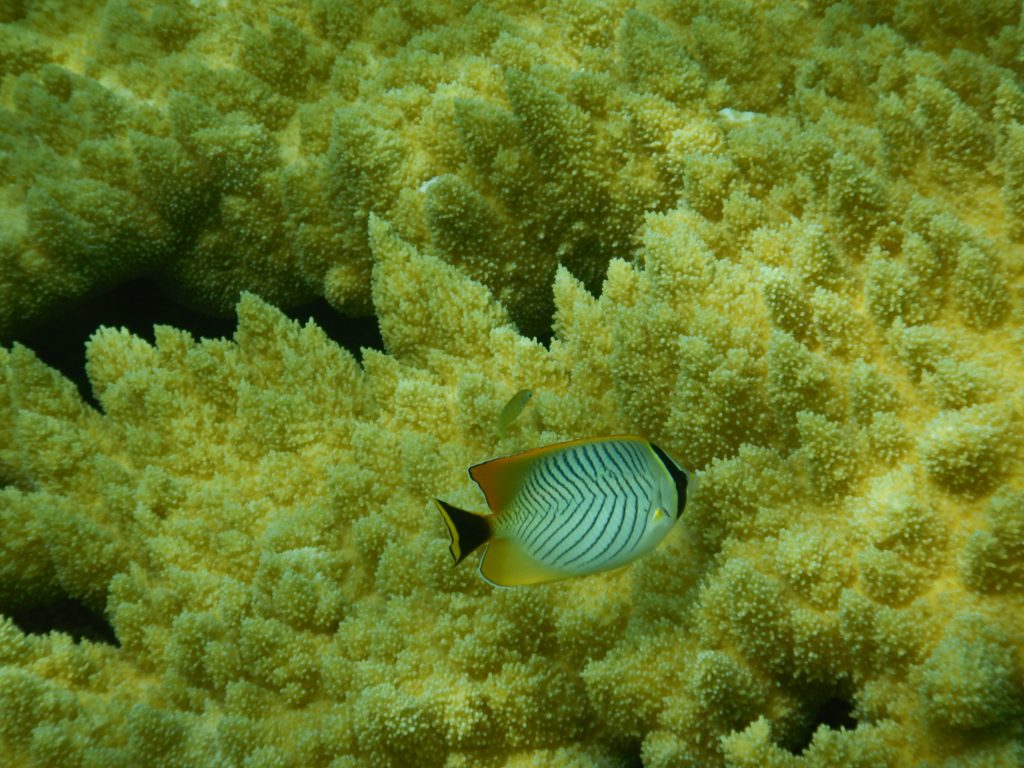 P.S. French Polynesia is going through a “second” wave of coronavirus that is much more extreme than the first one, which we previously likened to a “fire drill”. There are now thousands of people infected, mostly in Tahiti and nearby Moorea, but with small numbers popping up in 8 or 10 islands around the nation. None in Fakarava, but it’s safer to be self-isolated in a place with no one else around! To all those reading this, please take this disease seriously and take steps to keep yourself safe and healthy – and by extension those around you!

This entry was posted in 2020, Uncategorized. Bookmark the permalink.