We’re back in Fakarava for a quick turn-around, so this posting will be a little shorter than usual. Although the Tuamotus is a large archipelago with dozens of islands, mostly atolls, we only visited two of them in our first two seasons here. We started to feel like that might be short-shrifting the area. So we decided to check out a couple more.
As we got ready to go, we realized that we were short on oil for our engine. (It’s more than 50 years old, and although it runs great, it leaks oil along the way. More than we’d like to admit. 🙂 ) Because it’s a big ol’ diesel, it needs a fairly heavy oil that isn’t available at your typical 7-11. We contacted a place in Pape’ete that had sold it to us previously, and started making arrangements for them to ship it to us on the supply ship. But the conversation got complicated when we tried to figure out how to pay them (they couldn’t take our credit card, we didn’t have a local bank, etc). We ended up hopping up to the closer of the two atolls while we continued to figure this out via email. Two weeks later we went back in the hopes of intercepting a bigger supply ship (called the Maris Stella). It turns out that they carry large quantities of oil as a matter of course, enough that they are willing to sell some of it to others along the way. And they were happy to take our cash. We were thrilled to find a way to make this purchase without having to jump through any complicated financial hoops!

After that short stop in Fakarava, we left again and went to the other atoll for almost three weeks. Now we’re back in Fakarava briefly to meet our friend Fabienne at the airport.

The two atolls that we just visited are named Toau and Kauehi. Each of them has a very small population, confined to a tiny corner of the atoll that was on the opposite side of the area we visited. Pass-to-pass, Toau is only 14 miles from Fakarava, although it’s more like 25 from one anchorage to the other. We did this in an easy day’s sail. We picked our way between a mine-field of coral bommies, rising to the surface from a bottom about 100 feet deep. Fortunately they were quite visible in the conditions, so it was straightforward to watch for them and avoid hitting one. 🙂 The flip-side to these bommies, is that they were nice spots to go snorkeling. We dinghied out to several of them during our stay, and enjoyed the differences. One would have more fish, another would have more colorful coral, yet another would be bigger with a wider array of spots to focus in on. There were a few small islands along the reef (called “motus”) with the standard coconut palms to provide us with fresh juice and coconut meat from which we make coconut milk. We took our drone out to the nearest island a few times and practiced maneuvering it out to our boat and back, learning how to point the camera and take videos. It was fun, but not yet producing “sharable” results. 🙂 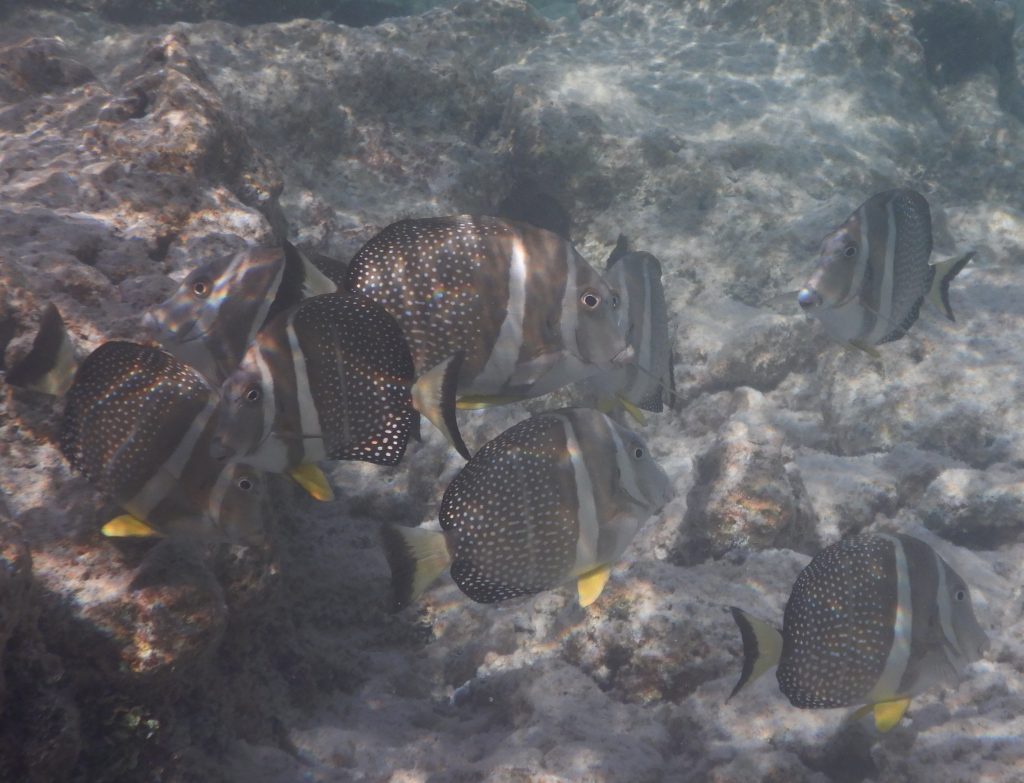 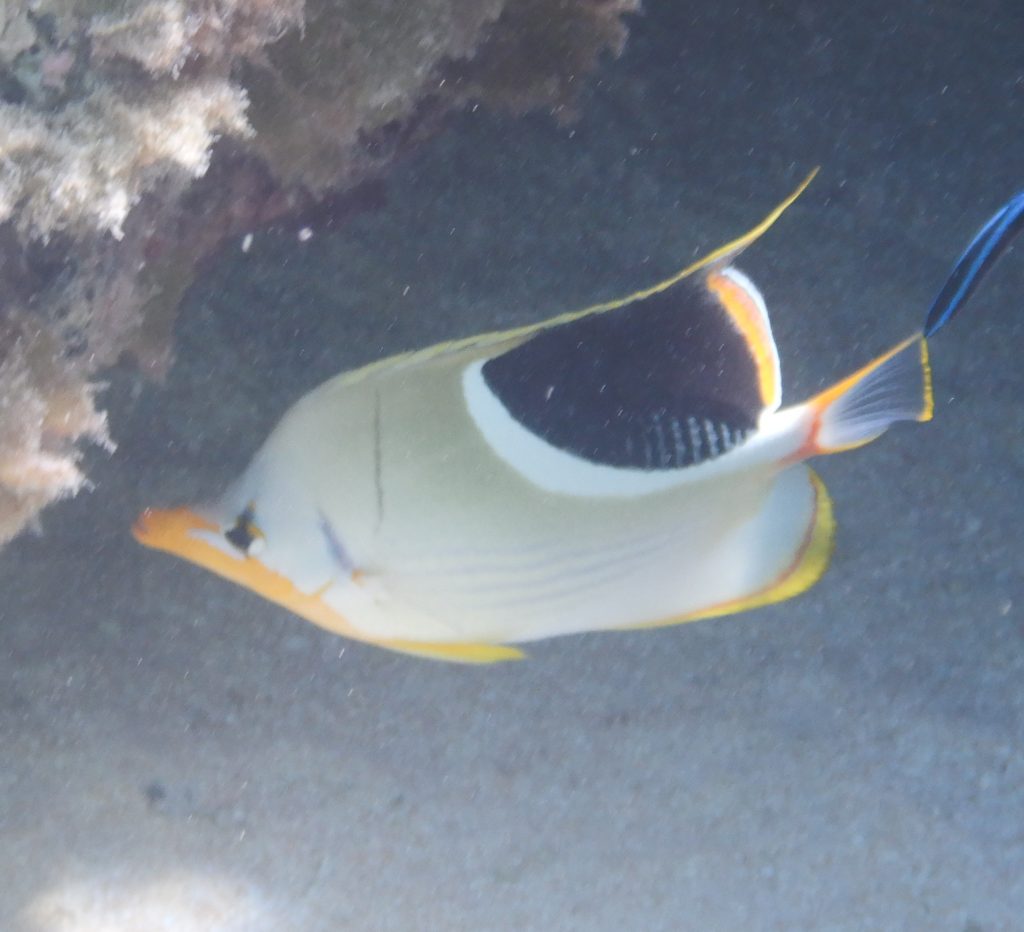 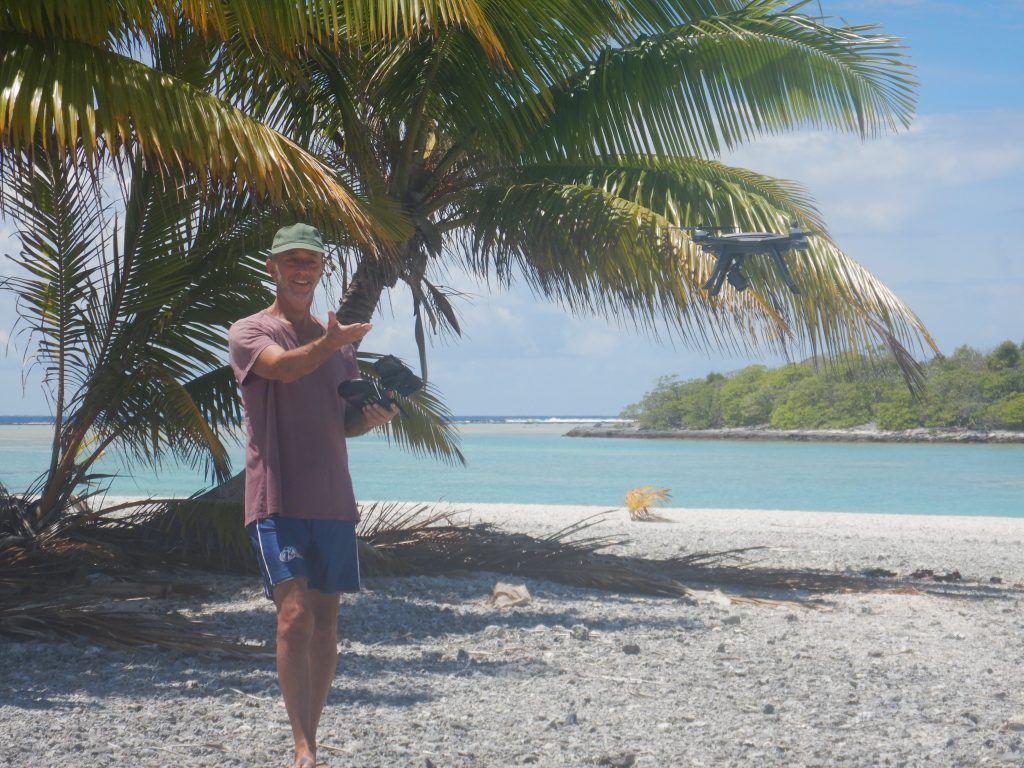 The second atoll, Kauehi, had lots of schools of tiny fish and correspondingly large flocks of black terns that would congregate throughout the day for a feast. We never tired of watching the birds diving and hearing them chattering at various times of the day. It was also engaging to swim through the big “clouds” of reflective silver-blue fish, which part as one approaches and closes up again after you’ve passed. Kauehi has very few bommies in the deep water, making navigation much more straightforward. It has more snorkelable areas along the shoreline, including an area close enough to where we anchored that we were able to swim there directly from the boat, which we thought of as a sculpture garden. The bommies seem to be “rooted” in the sand, and they offer cover to a variety of tropical fish that flitter around. We paid a visit or two to the nearby motus and the outer reef on the other side. In this area, there was a band of shallow still water between the reef and the motu that seemed like an “infinity pool” looking out to the rougher waters of the open ocean. In this area we saw some baby sharks that were only about a foot long. They were curious about us but startled away whenever we started moving. We also saw a curious school of parrot fish that were clustered together at the water’s surface but were sticking their tails up periodically. We couldn’t figure out what they were doing! Were they courting? Were they adolescents showing off their talents? Were they “standing on their heads” just to nibble the bottom of the shallow pond? We never got to the bottom of that question, but it seemed like an unusual thing to have observed. Kathy tried to make a video of them, but the battery gave out just at that moment. And something startled them, causing the whole school to start swirling around and dashing towards a break in the reef that looked like a waterfall of colorful fish! 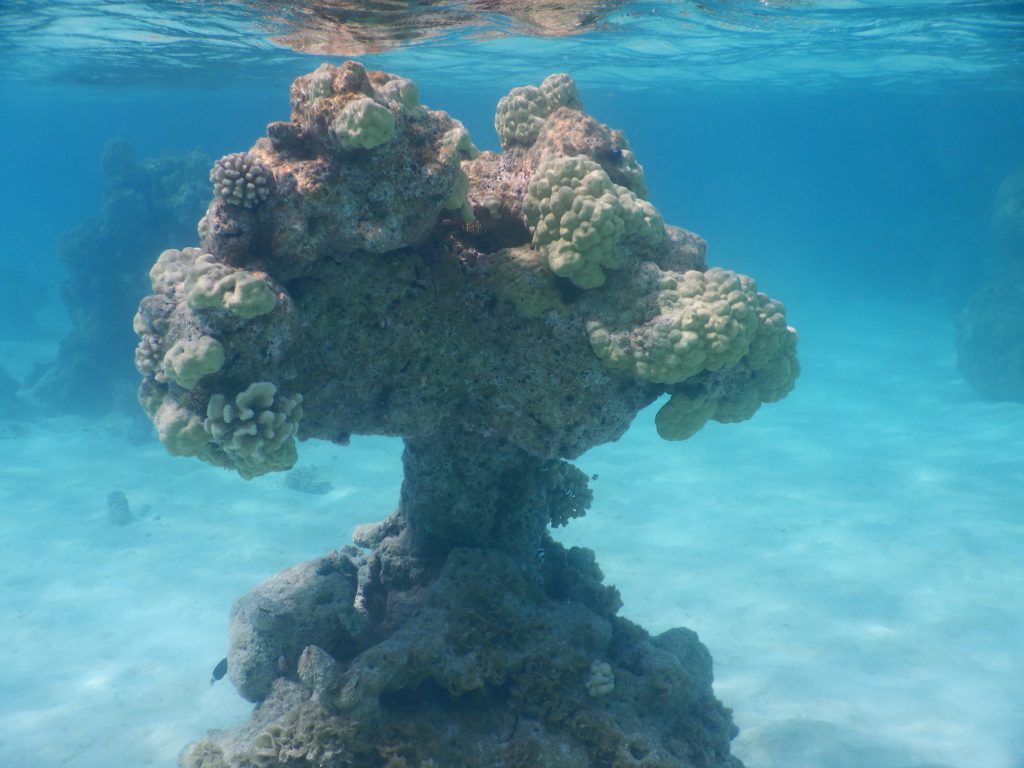 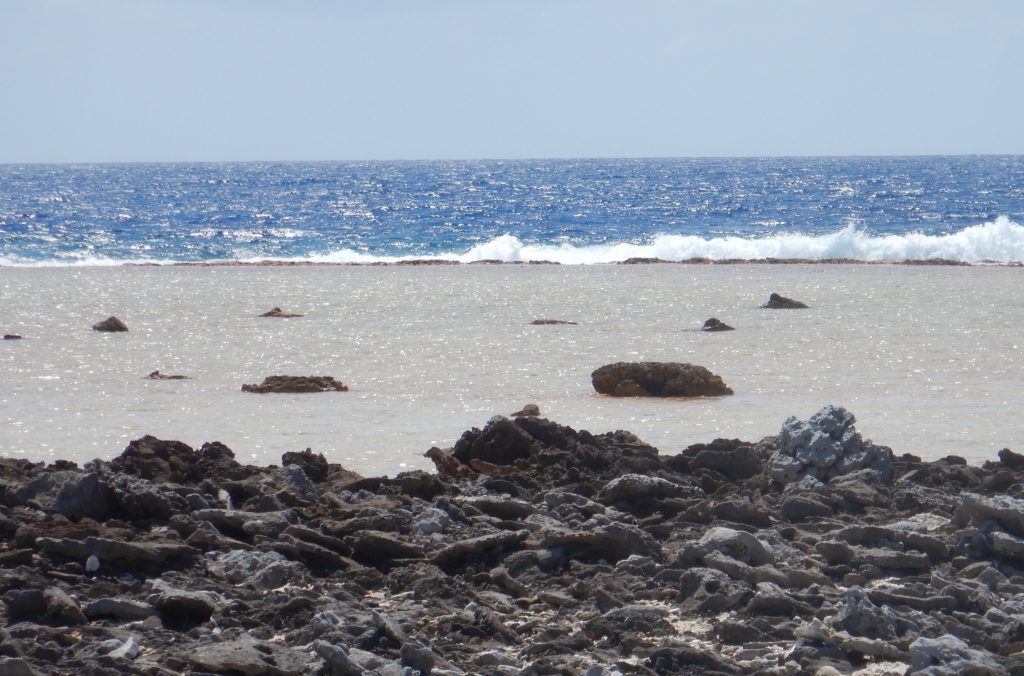 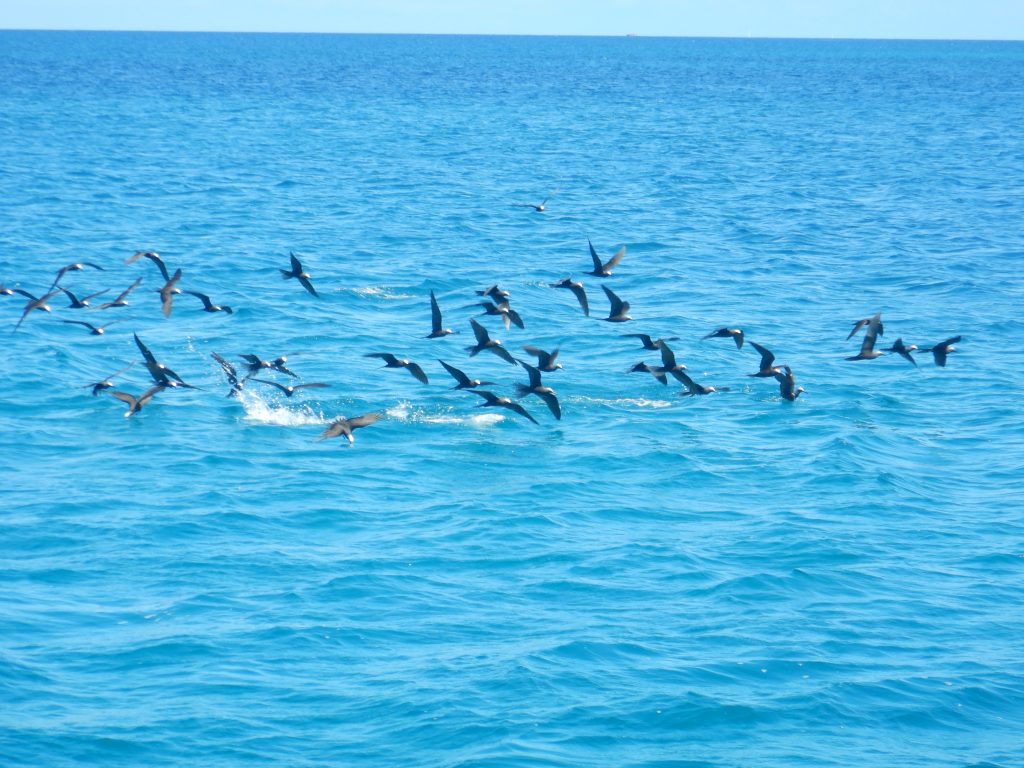 That’s all the time I have for now, but I’ve included a batch of photos to give you some color of the place. Enjoy your holidays – while staying safe! It’s exciting that the light at the end of the tunnel of 2020 is finally becoming visible, but don’t jump onto the tracks just yet. 🙂 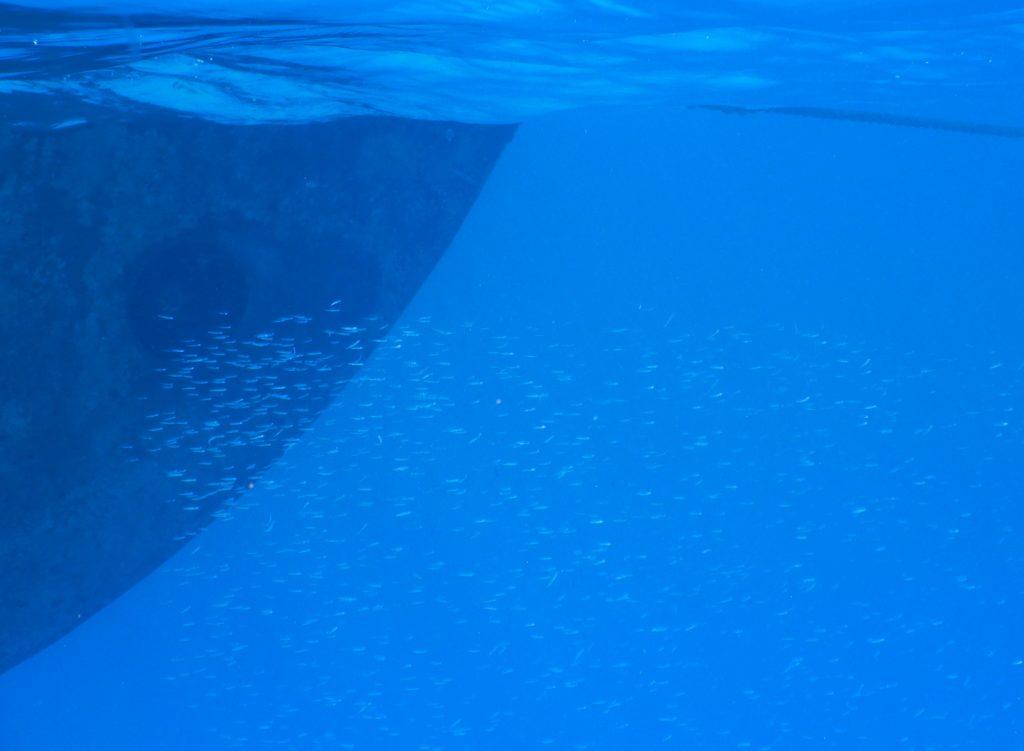 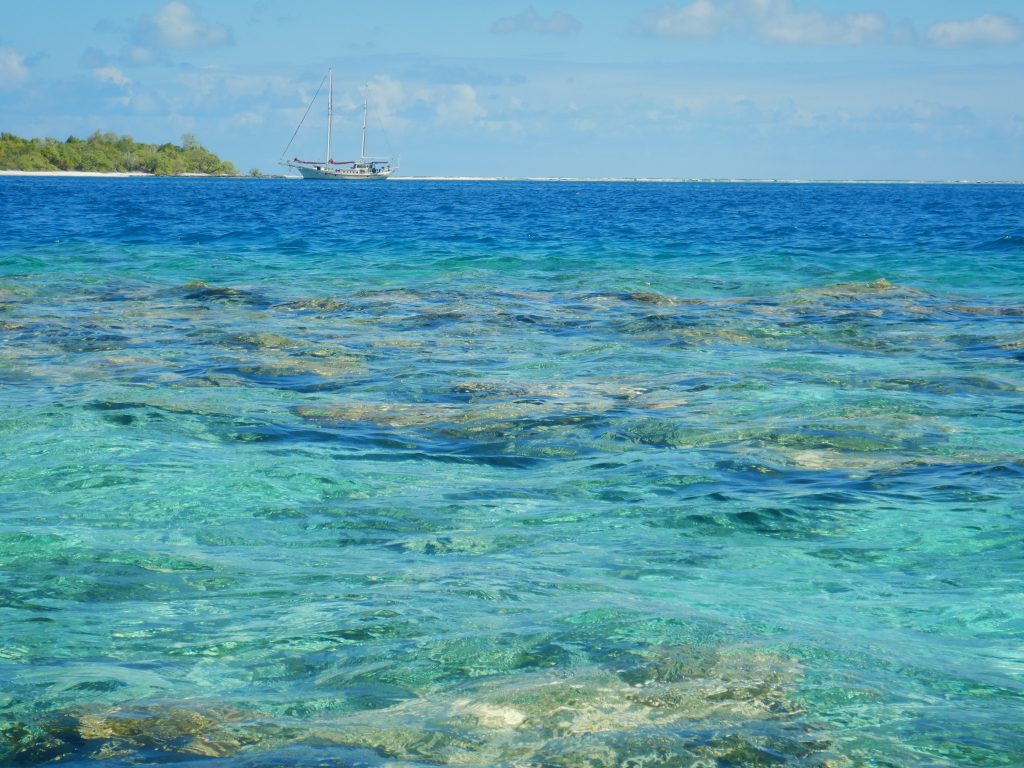 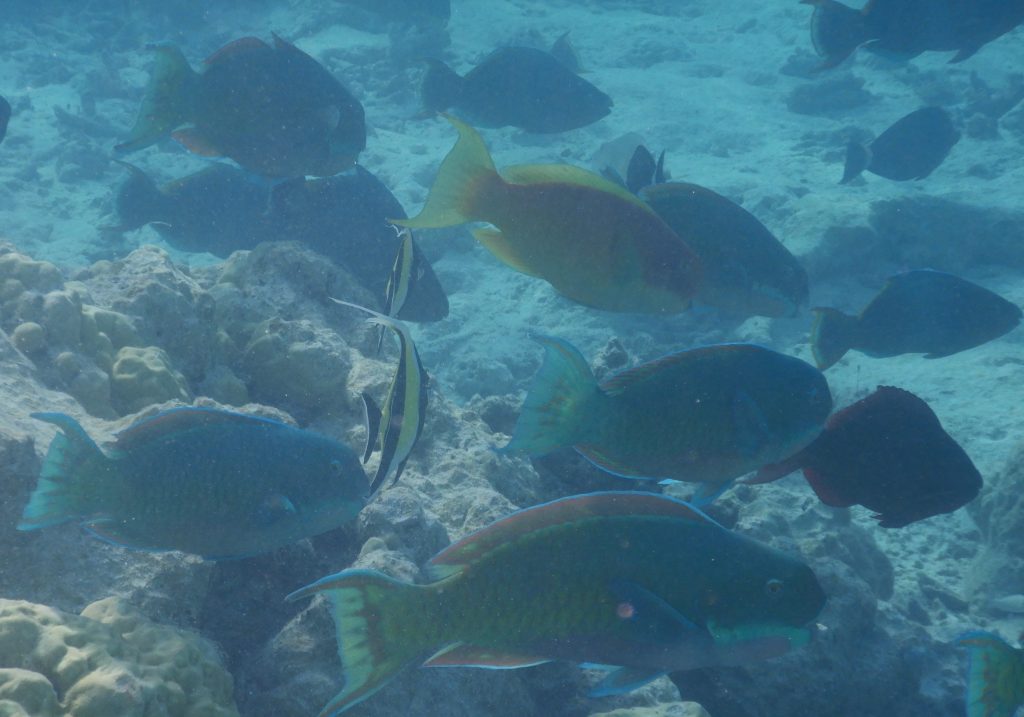 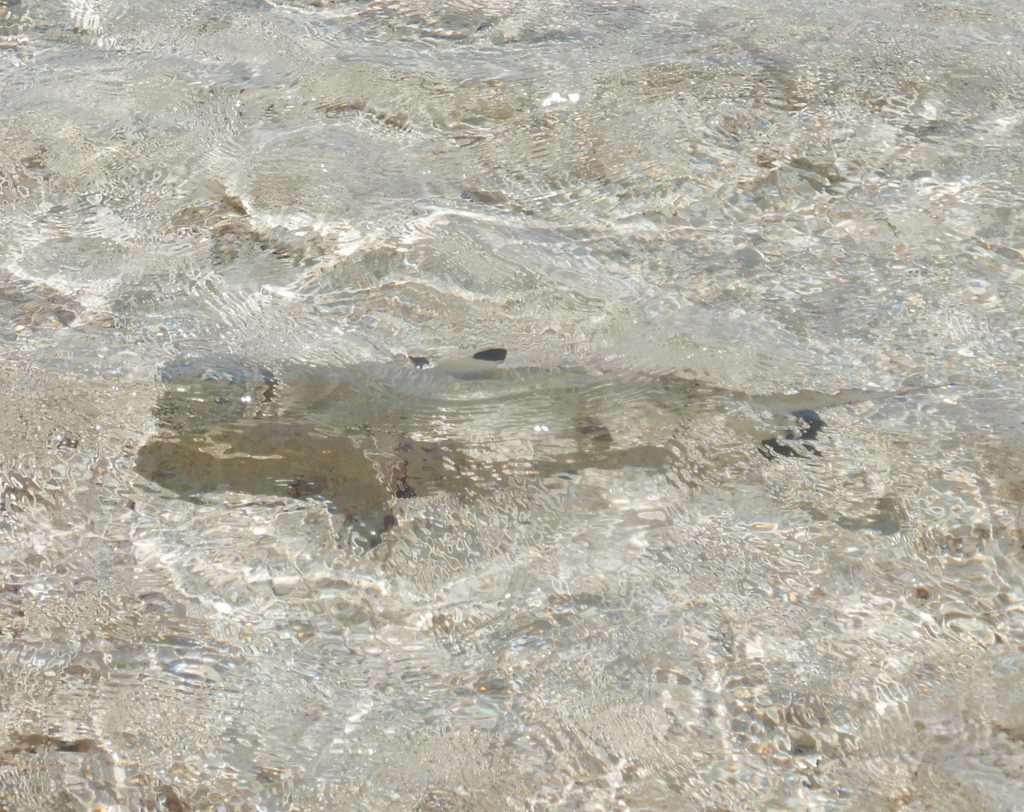 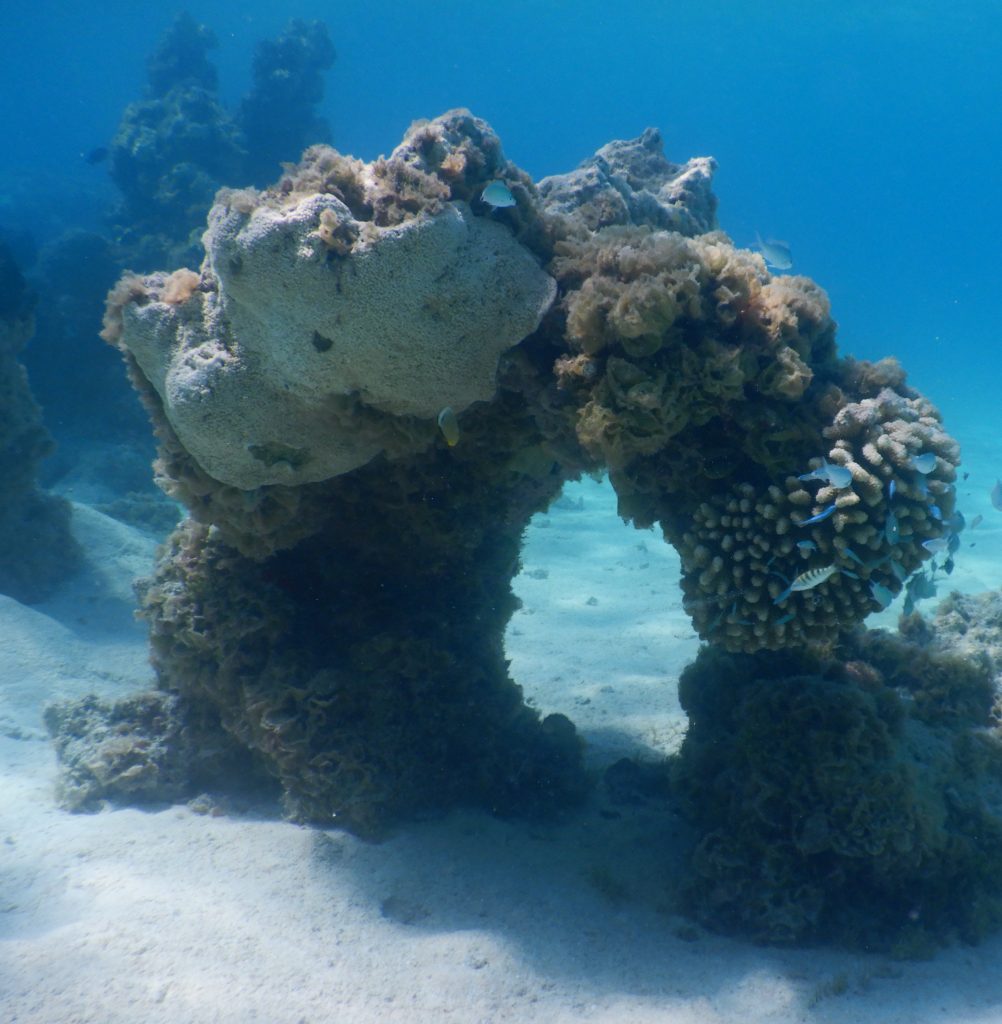 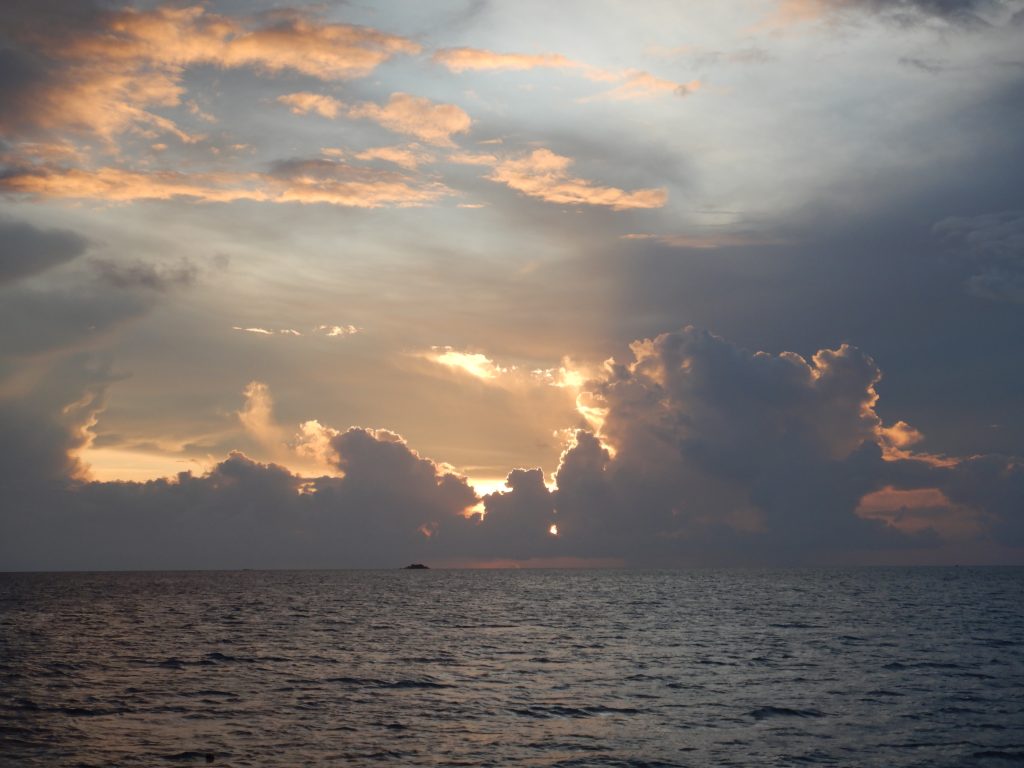