Once again I’ve been reminded that another month has passed without a posting to our blog. Forgive me, dear reader. It has been a busy time, although nothing particularly noteworthy has happened since our encounter on New Years Eve, when we ran into that storm that tore our sails.

After that, we made our way north back to Barra de Navidad. We took our time, though, enjoying ourselves in Caleta de Campos and Maruata. Both places had somewhat rolly anchorages that we had to ourselves, small towns with beautiful scenery that were completely authentic and rarely saw gringos. We played in the surf at Caleta de Campos and went for a walk along the beach/coast in Maruata. The surf at Maruata was intimidating for a dinghy landing so we anchored the dinghy 30 feet off the beach, just outside the breaking waves and swam to shore. The coast just north of Maruata is punctuated with huge rocks, perhaps you’d even call them hills. These rocks had internal fissures through which the waves would come roaring. The unusual thing about them, though, is that although you couldn’t see around the rocks to the ocean, you could hear the water crashing around inside. Some of the rocks apparently had big cavernous spaces inside, generating a loud rumbling growl. In between these hills there were small patches of beautiful sandy beach, mostly unoccupied.

Once we got back to Barra, we looked up Bob Hogin, a life-long sail-maker who has now set up shop here. He mostly does sail repair now, and we were lucky to find that he didn’t have much work that week. We piled three of our sails into the dinghy, and Bob met us at the Sands hotel. He does business in the large yard of his home. We discussed our various options with him, and were pleasantly surprised that he was able to repair all of them. The worst damage was to the mainsail, which needs to have an entire panel replaced. He quickly repaired the first two, and we are now waiting for some additional sail-cloth to be delivered from the States before he can complete the last one. We have left Barra, though, and headed north again. He will ship it to us in La Cruz (Puerto Vallarta) via bus when it is ready. In the meantime, we are able to sail (although slower than usual) and that makes us happy! 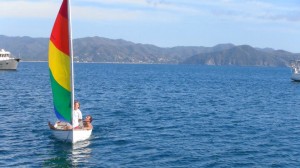 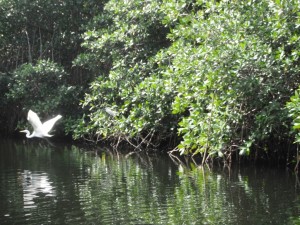 When we left Barra, our next stop was Tenacatita. We’d loved it on the way down, and we loved it on the way back north! This time, there were lots of boats there, and some social structure too. There’s a guy who is called “the Mayor of Tenacatita”, Robert on Harmony. He manages the morning radio net and organizes a steady stream of activities; well, actually, he’s sort of a clearinghouse for those activities. He also does a weekly gathering of boaters on their dinghies, rafting up together for a pot-luck and an opportunity to meet the others in the “neighborhood”. Every day, there’s a swim from their boat to shore, and that is just the beginning. Some days someone will set up a volleyball net for a rousing game, some days there will be a talk or a dominoes game in the palapa restaurant, some days there will be yoga on the beach, etc. In the evenings there are many gatherings on different boats, ranging from an open invitation to all for cocktails on a large catamaran down to an intimate dinner of two boats in someone’s cockpit. We pulled out our sailing dinghy and kept it busy for a few days, and enjoyed boogie-boarding in the surf. We took the dinghy up into the local estuary one day, and were amazed at how peaceful these bodies of water can be, although they’re so close to the rough-and-tumble surf. We ran into some old friends and made some new friends at Tenacatita – we hope to spend more time with Bruce, Jen and the kids on Northern Passage in the future. On leaving, one boater said “you’re never too old to enjoy a happy childhood at Camp Tenacatita”. 🙂 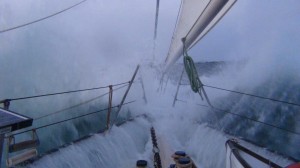 After Tenacatita we continued heading north, but each time we approached an anchorage we changed our minds and kept on going. As we got close to Cabo Corrientes, the winds got stronger and stronger, and we got nervous that we might be about to repeat our mishap, so we turned around and went back to anchor in Chamela until conditions were better. The very next evening the winds seemed benign so we decided to try again. Unfortunately, the winds picked up uncomfortably -again- just north of the anchorage and were blowing right on our nose. But they stayed steady, so we motored through the night towards Cabo Corrientes, rounding the cape and entering Banderas Bay at first light. We saw lots of whales that day, some of them breaching repeatedly. We breathed a contented sigh, though, when we dropped the anchor in La Cruz. It’s interesting how different pulling into a new place feels from returning to a place that is already familiar. Although we’re not really looking for a place to set down roots (right now), it is nice to come to a place where we know we can relax and find friends. Arriving at a new place brings with it the process of discovering the lay of the land, local hang-outs, and new people who may become friends. It’s exciting, and also sometimes a bit daunting. 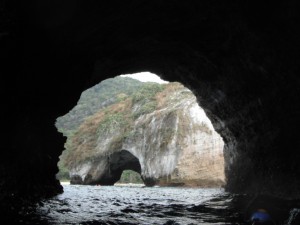 Back in La Cruz, we reconnected with several of our friends from last year. Hooray! One day we took a field trip out to go snorkeling at Los Arcos. We hadn’t been there before, and were glad for the excuse to get out for a day of fun. It turned out that 10 people went, mostly younger so there was a lot of energy. We took a bus (actually 2 buses) to Puerto Vallarta, then walked around the corner and got on another to the town of Boca de Tomatlan, where we had some lunch at a beachside palapa. Our original plan had been to swim from shore out to the big rocks that form the attraction, but we changed our minds and rented a panga (complete with panguero!) to take us out there instead. Los Arcos is a group of about 5 big rocks located about a quarter of a mile off the shore. Most of them have swim-thru arches, and at least one has a cliff that is high enough and steep enough that some of us were discussing cliff-diving (but no one actually did 🙂 ). We all enjoyed snorkeling around the rocks. There’s quite a bit of wildlife there, perhaps because it’s designated park space, perhaps because tour operators feed the fish to attract them, perhaps because it’s perfect habitat – as pinnacles often are. Whatever the reason, we spotted lots of types of reef fish, several types of eels and a some beautiful eagle rays that were doing circles around the area, rather than just flying by as they usually do. We were all pleasantly tired on the bus(es) back home. Coincidentally, Kathy found a couple of old photos from Los Arcos that same week when scanning some family scrapbooks – her parents took a “second honeymoon” trip (celebrating 15 years) to Puerto Vallarta in 1978. Who knew that one’s parents were ever that young!?  With mixed emotions, we parted ways with MaryJo. We introduced her to Ali, who you may remember had left La Cruz with us 6 weeks earlier. Ali is living in La Cruz, and just happened to have an extra room in the house she’s renting. The two of them hit it off nicely, and now MaryJo is once again land-based – but not for long, I suspect! She’s already hooked up with a few boats who are participating in various races around the area and had a few offers to crew on longer passages. Her biggest difficulty at this point is deciding just which path she wants to follow (first!). Ultimately she hopes to buy her own boat and go cruising, so we hope to see her again down the road, and likely sooner rather than later! It was a treat to have her with us for the last month, and we wish her all the best in her travels! 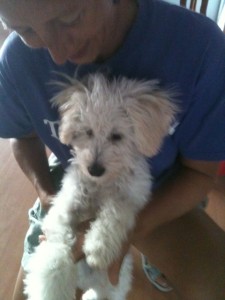 On Saturday we had dinner with some friends – and decided to join them for a driving trip up to Phoenix the next week! They had rented a mini-van in order to bring back some new sails, so there was plenty of room for more – or so they thought! We moved the boat into a marina Monday, to keep her safe and sound while we’re gone, and 5 of us hit the road on Tuesday morning. We’ve just now returned from that whirlwind trip. It was fun to get to know Mike & Marie better (and to meet Ron, an additional traveling companion). We drove straight through the 26-hour trip, and spent the week with Mike’s mother, who lives in their house while they’re away. We especially had fun playing with Charlie, a 4-month “golden doodle” puppy that she is taking care of until he’s old enough to be trained as a diabetic assistant dog. He’s cute as can be and has an endless supply of puppy energy. He’s also quite bright and is beginning to learn basic commands. If he wasn’t valued at $3000, he just might have found a spot in our luggage! The trip was also successful, in that we managed to get the fancy paint that we’re going to use to redo our hull in April. The last round didn’t adhere well, so we’re going to try again, this time stripping off all the layers down to raw concrete and reapplying the epoxy undercoat. This paint has so much copper in it that the bottom will be copper-colored, including turning that lovely green. We also picked up some epoxy paint to do the top-sides, and have decided to change the color again, this time to a sand color. So don’t be surprised the next time you see the boat and she looks a bit different! We spent one day driving to Southern California and back, and ran into a bit of snow on the way. This contributed to our sense of culture shock: all the traffic, abundant “stuff” for sale, and people everywhere you look! The drive back through Mexico was also beautiful, first the wonderful desert and then the verdant hills and valleys between Tepic and Puerto Vallarta. It’s great to be back, but we’re not staying long. This afternoon we leave for our next “excursion”, which we’ll tell you about next month. Happy trails to all!