Yikes – it’s been almost two months since I last posted to our blog!  Sorry for the long silence.  Life has been pretty full, so here’s a taste:

In late March, we had our last scheduled visitor.  Dan’s cousin, Ben, came from New York with his 11-year-old daughter Emma and his newly-betrothed and utterly delightful fiancee Kathleen.  We enjoyed visiting with all three of them, individually and together.  The conversation was varied, thoughtful and fun.  Although they were only here 5 days, we packed a lot in.  We visited the beach a couple of times in La Cruz, and played on our surfboards for the first time.  Our surfing friend Rob had suggested that one milestone for him had been when he’d been able to say “I’m surfing” before falling.  Although it doesn’t take long to utter that short sentence, it’s a surprisingly long time to maintain balance on a tippy bit of flotsam.  Emma was the only one to achieve this feat, adding insult to injury by staying up long enough to sing Jingle Bells all the way through – twice.  We also took the boat out for a nice sail to Yelapa.  As on our last visit there, we took a day to walk up the river to the waterfall.  Again we were fortunate to come on a day when no one else was there, so we had the whole pool to ourselves.  The first night we spent there was pretty rolly, so we had a brilliant idea for the second night: grab a second mooring ball for our stern.  Seems pretty obvious, right?  This would keep us pointed into the swell, even when the wind died down in the middle of the night.  It worked well until about 7am, when Lungta swung 180 degrees.  We had pulled too hard, causing the weight on the bottom to lose its grip and slide down the precipitous slope until the 60 foot rope holding Lungta to the mooring now held the mooring to Lungta like a pendulum dangling off the stern in 195 feet of water. Uh-oh!  Someone worked to install this mooring ball, and now we’d just removed it in the blink of an eye!  We discussed various plans, and decided to wait until the winds picked up again to try to reposition the weight close to where we found it.  Although things turned into a bit of a three-ring circus before all was said and done, we did eventually accomplish our goal.  The owner of the mooring came by while we were working at it, and two other pangas joined in as well.  Just when we thought we were done, it was found that somehow the line had gotten twisted together with that of another mooring.  Kathy donned her dive gear and used the “hookah” to go down to straighten out the tangle, much to the surprise of the fishermen.  The sail back was great, but it was sad to see Ben and his girls go. 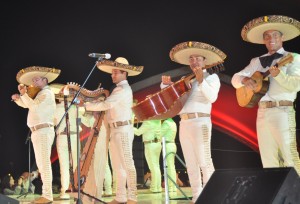 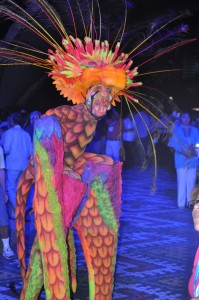 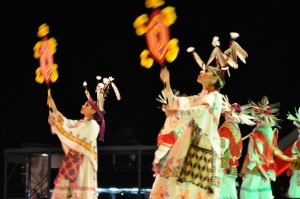 During this visit there were some major preparations taking place in the marina for an event that occured a couple of nights later.  A month earlier, they had poured 5 cement slabs near the main parking area, that could be used as helipads.  Now they erected huge awnings/tents over each of them and built a big sound-stage in the center with 30 foot television screens and an elaborate lighting infrastructure.  It turns out that there is an annual convention for the tourist industry, which was originally held in Acapulco but recently has been held in different places.  This year it was held in Puerto Vallarta, and they planned the bash for the final evening to be held in La Cruz.  Rumor had it that $1.5 million was spent on this event, which they expected 3000 people to attend.  Not the way I’d spend my money, but it was fun to watch the festivities.  One night they did a dress-rehearsal of many of the acts, including dancers, mariachi bands and performers in Cirque du Soleil-like costumes.  The sound system could be heard way out across the water, and we heard them working until 3 in the morning.  The following evening, the real show began.  After a few hours of hearing the various performers, we decided to get a closer look.  We hopped in our dinghy and stealthily snuck into the marina.  No one stopped us, and we ended up spending an hour or so on the premises watching the last two performances.  We met a few other boaters there, and later learned that some of them had also partaken of the appetizers that were being circulated by nattily dressed waiters, and even the open bar!  There was a hot-air balloon set up in the parking area, lit up with a warm glow, and small dirigibles circling overhead.  The finale was a round of fireworks that must have lasted for a solid 20 minutes!  It took roughly a week for the area to get cleaned up and deconstructed.

After Ben’s visit, we expected to leave La Cruz and make our way north into the Sea of Cortez, but things keep coming up that delay our departure.  One of the first was a short-notice visit by a friend from Portland who carved two days out of his visit to his mother in Guadalajara – and brought her with him.  Rod has recently moved his woodworking hobby up a notch and begun making mantel clocks that are beautiful enough to sell.  He’s figured out how to etch a copper plate to make a faceplate, using a Xerox printer as part of the process. 🙂  He brought us one of his first as a gift – and now we’re trying to figure out where to build a mantel to display it!  Rod and his family cruised down to Mexico several years ago, and are dreaming of doing it again.  We all had fun comparing notes about our journeys, the things that went wrong, and the amazing experiences along the way.  Rod’s mother Marian was also a fun person to have visit.  She’s quite independent and has done her share of traveling throughout Mexico and beyond.  Although the visit was all-too-short, it sounds like it just might be time for this family to begin planning another trip down this direction, and the first step might just be bringing the boat down to the Sea of Cortez next fall to prepare it for a longer journey.  We’ll certainly look forward to seeing them again!

We’re in a bittersweet period, since we’ve made a number of friends here in the last few months and many of them are moving on.  It’s not unexpected, one of the drawbacks of the lifestyle, but sad nonetheless.  Some people have headed across the Pacific towards Polynesia (as we expect to do in a few years); some headed south, and many put their boat in a marina or hauled out for the rest of the season and headed north to wherever home (or work) is.  Several of them had going-away parties, which were universally fun and we never failed to make new friends each time.  The last party we attended was for Christian, a 30-year-old who has been single-handing a 27 foot boat for the last 4 years.  He was an engineer at Boeing, and has made some amazing upgrades to his boat on a shoestring budget (most of it involving baling wire!).  He surfs and free-dives and takes his boat out sailing more than anyone else in the anchorage.  He has an “extreme sport” video camera, and he’s been making some wonderful videos for folks in the anchorage that he’s been out sailing with.  You can see the link to ours here. Lungta Sail Video He’s heading back to Seattle to resume the workforce or perhaps attend grad school.  He’s going via Hawaii, which will be the longest passage he’s done yet.  Our thoughts are with him on this big adventure! 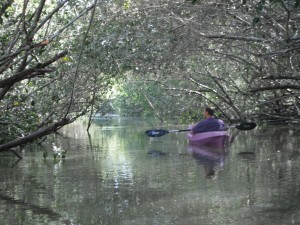 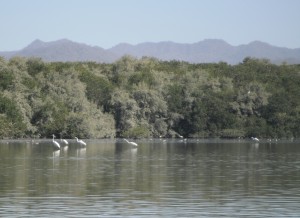 We had dinner with some new friends on their boat Aquarelle the night before they were going to move it into a nearby marina that’s part of a big resort called Paradise Village.  We decided to accompany them on the 1-hour trip, and to spend the afternoon playing in the pool.  Kathy enjoyed the water slides into the pool, and Dan enjoyed the ping-pong – we were hooked!  We decided to move in ourselves – OK, not for good, but for a few days of R&R before leaving the area.  We also changed our travel plans around again; we decided to do another “excursion” this time to Copper Canyon, but rather than finding a place to leave the boat further north as we’d been discussing we left from La Cruz.  Since this posting is a little long, I’ll do a second posting for that trip.  We’ve been back from Copper Canyon about a week, and have really enjoyed the luxury of having a dip in one of the four swimming pools followed by a soak in one of the jacuzzis every evening.  Paradise Village is a clean, well-run marina, situated at the mouth of a small river/estuary.  One morning we kayaked upriver a few miles.  There are lots of signs warning about crocodiles, but we didn’t see any – perhaps this was a good thing, as we’ve since learned that they get up to 10 feet long, and someone told us that they really like kayaks “cause they’re crunchy”.  🙂  We did however see lots of iguanas up in the mangroves and lots of water birds.  To our surprise, the river, which in some places narrowed to 20 feet completely engulfed by mangroves, led to a large lagoon over a half mile across, where we hung out for an hour or so watching the birds come and go.  Although Paradise Village costs roughly the same as the marina in La Cruz, the downside is that it’s full of tourists, (go figure!) so we’re missing the wonderful community that we’ve found in La Cruz.  We just moved the boat back to La Cruz for a couple of days, and then we’ll be leaving for The Sea – really, I mean it this time!  We’re hearing mixed reports about the internet availability in that area, so our posts for the next 6 months will be sporadic and likely without (many) pictures.

Until the next time, hope all is well with all our friends and family.