The 4th of July, and what better place to spend it than in Ketchikan, Alaska? Well, it might have been slightly nicer if we weren’t in the middle of a small gale. The evening’s fireworks display was called off because of the strong gusty winds that were swirling around the town. But there were quite a few locals who had a couple of firecrackers of their own, one person even set off some flares (probably not such a good idea). There were also a series of events all afternoon, includnig a parade that most of the town turned out for – along with several thousand additional cruise ship guests. There were three cruise ships in town that day, which just about doubled the population! The parade was wet, quaint, but enthusiastic. They had military vets, coast guard, and an armored car or two. They had a few floats representing each of the high school classes. They had a marching percussion section and a budding rock star. And they tossed lots of candy and streamers into the crowd. What could be more fun? Afterwards there was a rubber ducky race down the local creek, sponsored by the local Rotary Club, but we ended up missing that one…

Ketchikan is Alaska’s 4th largest city, breaking 8000 citizens. It’s built on some really steep terrain, but they’ve dug in pretty solid into the bedrock. Many of the roads and sidewalks are actually boardwalks or wooden staircases. It’s very picturesque. Who needs a gym when your front door is six flights up from the street? We enjoyed dinner out one night at a pizza place that advertised “We also serve Filipino food”. So we tried the Filipino food, and were tickled to get an entire tilapia fish that was deep fried. Don’t know what the locals would have done, but we didn’t eat the head or tail. 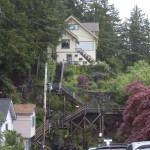 We found ourselves in a marina among lots of really big boats, mostly commercial fishing boats, but a respectable number of recreational boats as well. This was the first time that we’ve ever been in a place where we weren’t hands-down the biggest boat around. The Alaskan Gypsy, a few slips down, was just slightly larger than ours, and had three masts. We got some good advice from Dave & Peg, who had been sailing these waters for over a decade. We were surprised to see several of the boats near us had people watching television in the evenings, rather than enjoying the scenery, the town, or the company of their companions. Our favorite entertainment was the large number of bald eagles that live near town. We saw some mating behavior and some contentious interactions with smaller birds like seagulls, and learned to recognize their calls.

We caught up on some of the chores and repairs, bought a fishing license, and resumed our travels north. The next day, we passed through the Wrangell Narrows. This is a 25 mile stretch that gets as narrow as a tenth of a mile and as shallow as 18 feet (according to the charts), but sees quite a bit of traffic and has a reputation for being a nail-biter. The best way to time this narrows is to begin near the end of the rising tide, which creates a current pulling you in, then continue to travel as it slackens off, and exit on a falling tide, which creates a current pushing you out. Feels very clever! The entire passage is marked with lots of navigation aids, including 62 numbered buoys – the standard “red, right, ,returning” applies heading north, but because of the meandering route it wasn’t always as easy as it sounds. Kathy really enjoyed piloting the boat through this challenging section.
As we exited the narrows, we got our first sight of ice floating in the water: a few icebergs that had broken free from some of the nearby glaciers and were big enough to last more than a week. It was exciting and a bit unnerving to us, and we took turns on the deck up front, on watch. During this same stretch, we saw a huge number of whale spouts, although most were a few miles away and you wouldn’t even notice it if you weren’t looking for it. Also, we caught our first fish this day, a beautiful silver salmon. We didn’t think to take his stats, but it was probably 24″ long and perhaps 15 pounds. We had salmon steaks for dinner, and Aria made lox which we had for breakfast several days later – yumm! We’re all a bit conflicted, and clumsy, about killing the fish. Someone had told us that a shot of vodka to the gills would kill a fish more quickly and humanely than a blow to the head, so we gave that a try. It did not seem to do the trick, and we ended up having to get the “fish-whacker” to do the trick. Later that night, we caught 3 other small fish of different sorts, which we didn’t really know what to do with so we threw them back. One was a flat-fish, perhaps a flounder or a tiny halibut. We’ve got so much still to learn! Since then, we’ve caught a second silver salmon, and this one was a female so we’ve been enjoying caviar with rye bread or bagels. Life is good!

If you are adventuresome and very lucky, you occasionally experience a magical place which resonates with your soul and stays with you for many years. We spent that night in such a place. Sandborn Canal is just a skinny little inlet on the chart but once inside we had a sense of relief and wonder at how spacious, pristine and peaceful it was. There were steep hills covered in evergreen trees all around. Lush meadows The air was so quiet you could hear the birds coming to their evening rest half a mile away. Sandborn Canal inspired us to start a new list – of places that we hope to return to. After we’ve seen everywhere else, of course. 🙂