Well, it’s been six weeks since I last wrote to you, and the world has changed unbelievably in that time!

The coronavirus has changed much about the relations both between people and countries. Here in French Polynesia that is certainly true. After the first 15 cases were logged, the authorities ordered a 15-day nationwide stay-at-home policy, which has since been extended. All nonessential businesses are closed, and people are only allowed to leave their homes for certain “authorized” reasons. Each time one heads out, they must fill in a form stating what that purpose is, and police can stop anyone to check that form. We’ve only been off the boat twice since then. They’ve also prohibited boats from moving in Polynesian waters and all water-sports. Recently this policy has been clarified to include even being in the water to maintain the boat’s hull.

The borders have largely been closed, with virtually all international flights cancelled. There are still infrequent flights scheduled to Paris and we hear of occasional other flights, mostly to import medical gear. Cruise ships are forbidden, and sailboats are increasingly being turned away. 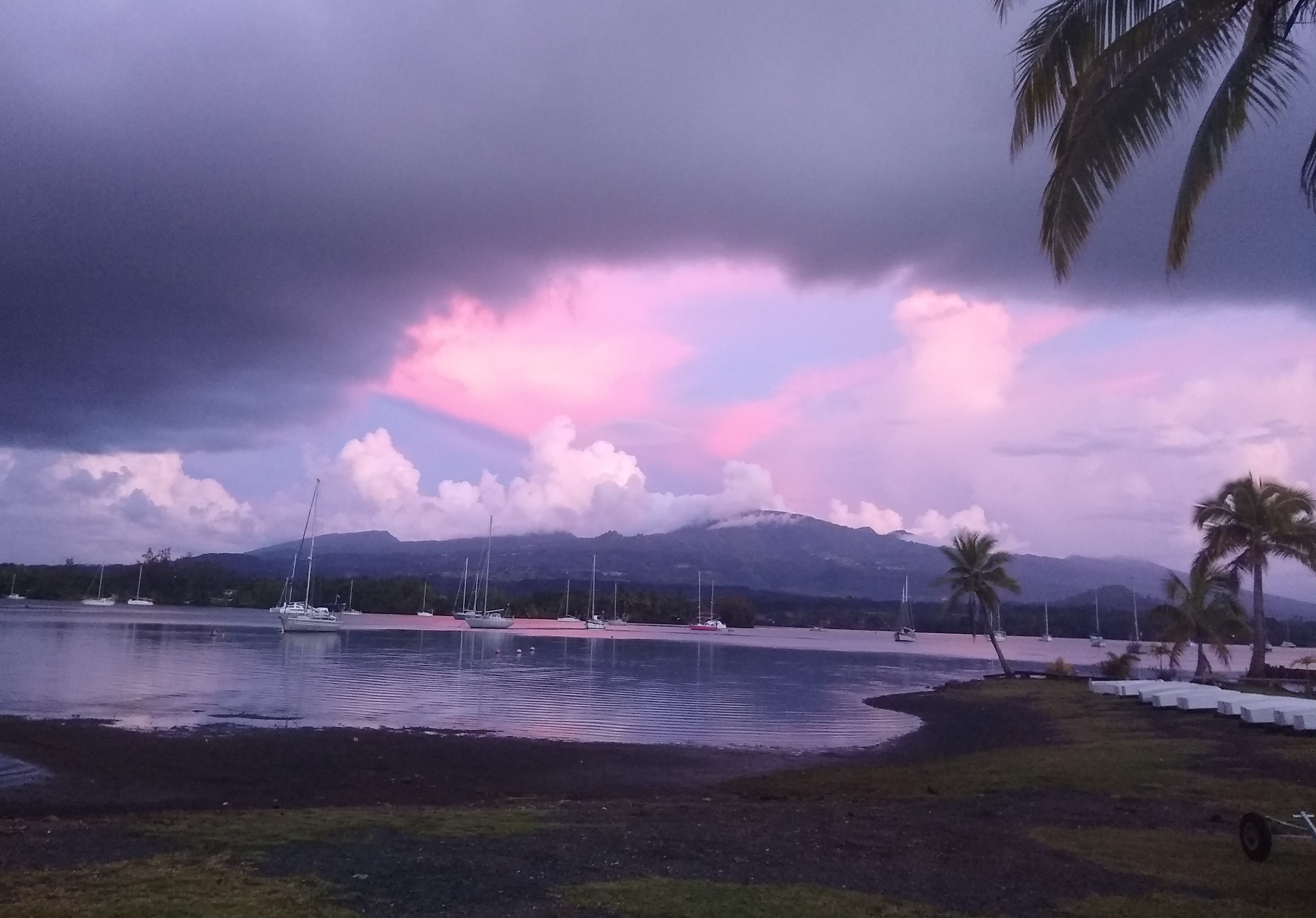 Boats which left for French Polynesia more than 3 weeks ago still have some latitude to stop, quarantine and apply for permission to stay, but they aren’t guaranteed that permission. There is some level of resistance from the local population to welcome in foreigners, who they see as a threat. This is more based on the historical events of the first encounters with Europeans who brought diseases that killed up to 90% of the populations in these islands than on the actual likelihood of an asymptomatic sailor who has been at sea for a month or more bringing in the latest coronavirus. But one of the earliest cases here was a Swiss person on a chartered boat in the Tuamotus, who ended up being the first hospitalization, the only one for any significant length of time, but who has recovered enough to come off that list and be sent back home.

So we’re here for a while longer. We had vacillated a bit about whether to move on to New Zealand this year or next, but I think the writing is now on the wall for that! We will need to renew our visas to stay here another year, and we don’t anticipate any problem with that – except that the offices are currently closed! 🙂 It’s unclear whether we will be allowed to go back to the Tuamotus this season, but time will tell…

In the meantime, we’re persistently working on our hard canopy over the back deck. It’s coming along nicely! We built the frame from aluminum material that we were able to buy from a boatyard nearby. We had some startup troubles with our welding system, and ultimately purchased a new $3000 welder that is higher-end than the old one. It has much better capability of working with aluminum, and made quick work of this project. On top of that frame we cut sheets of plywood, painted them, and bolted them down. We’ve installed a simple water-catch system of shower drains and PVC piping (not to mention the design work built in to put enough slope in the frames that the water will uniformly collect in an intended place!) Now we’re working on the cosmetic trim work, more plywood construction, then painting. Finally we will install the 5 solar panels, two of which will be extended out to the sides and need a mechanism to bring them in for big weather or close quarters like a marina. We’ll probably need some additional materials for that last bit, so the entire project won’t be wrapped up until some time after we regain access to a hardware store. But we’ll already have all the benefits as soon as we clean up the back deck from the tools, paint, and construction debris – probably just a couple of days away! 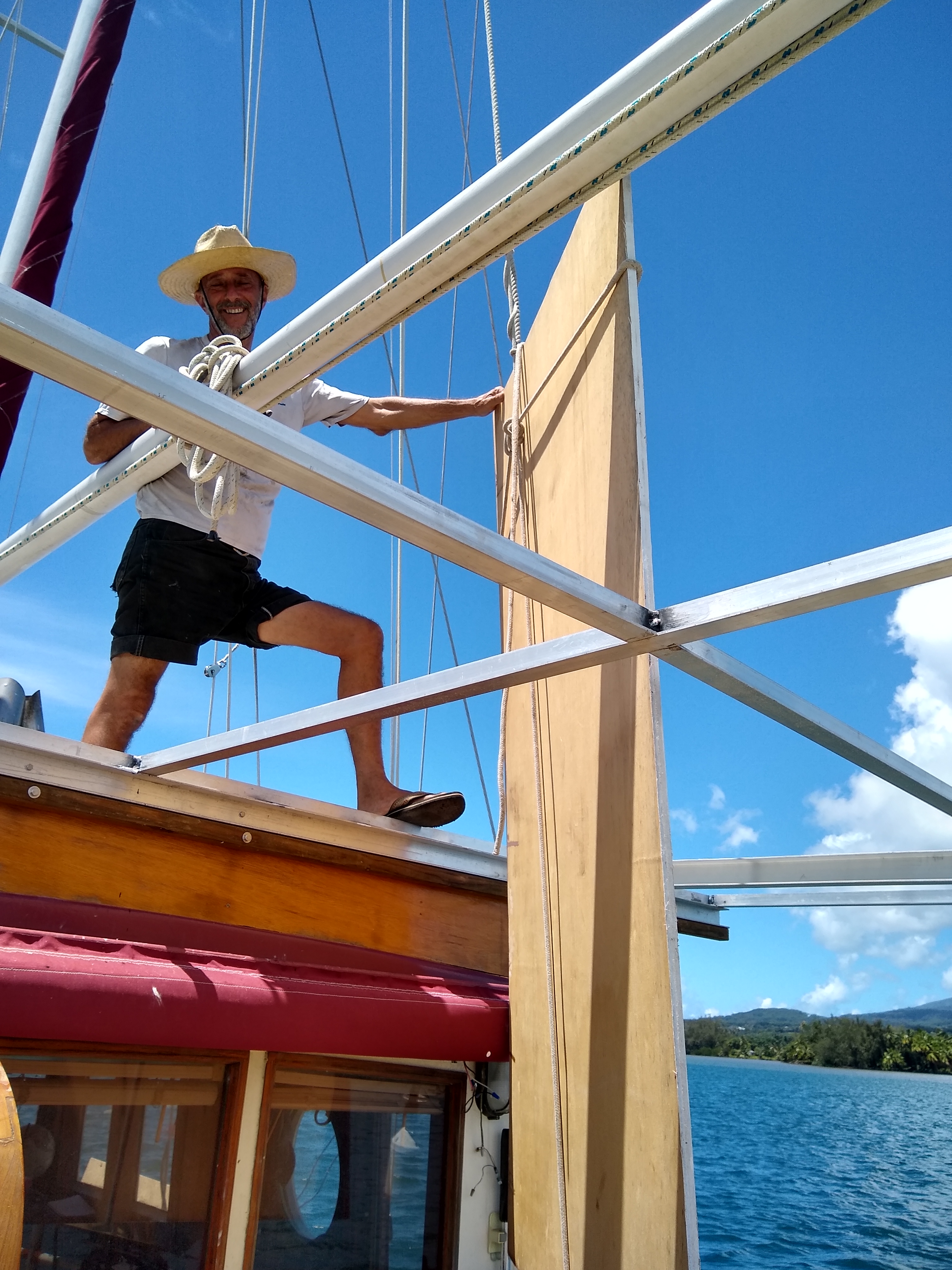 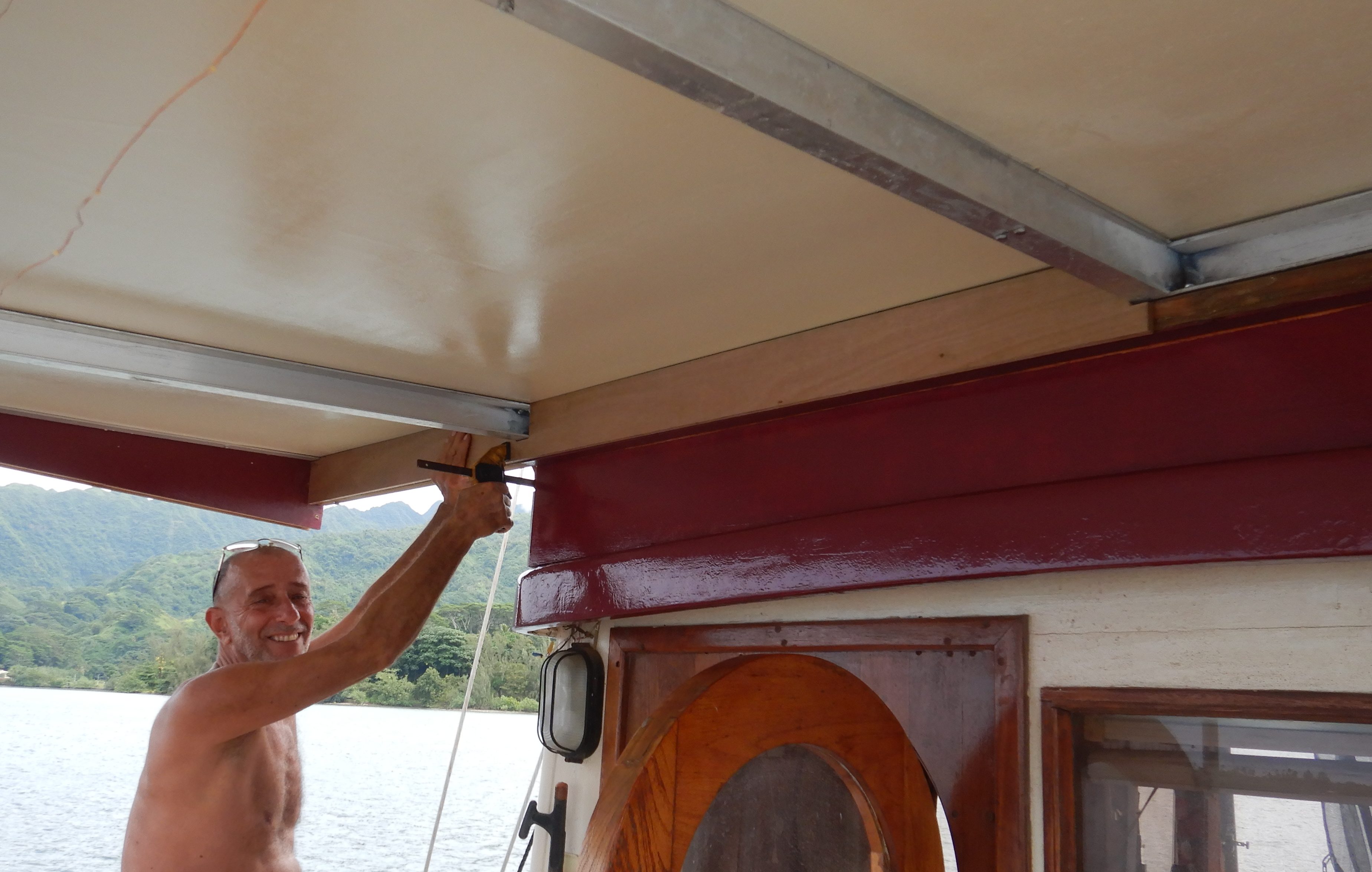 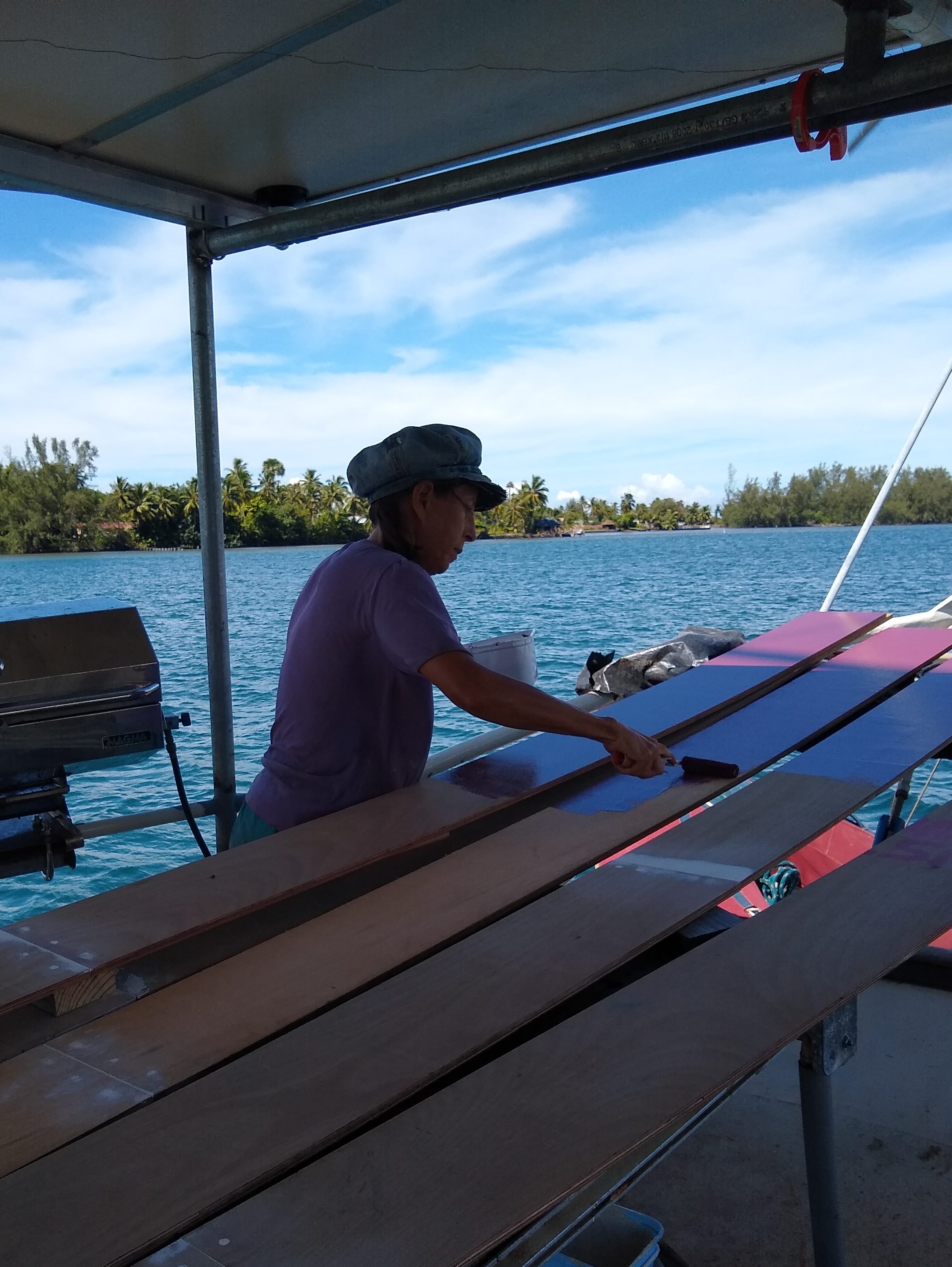 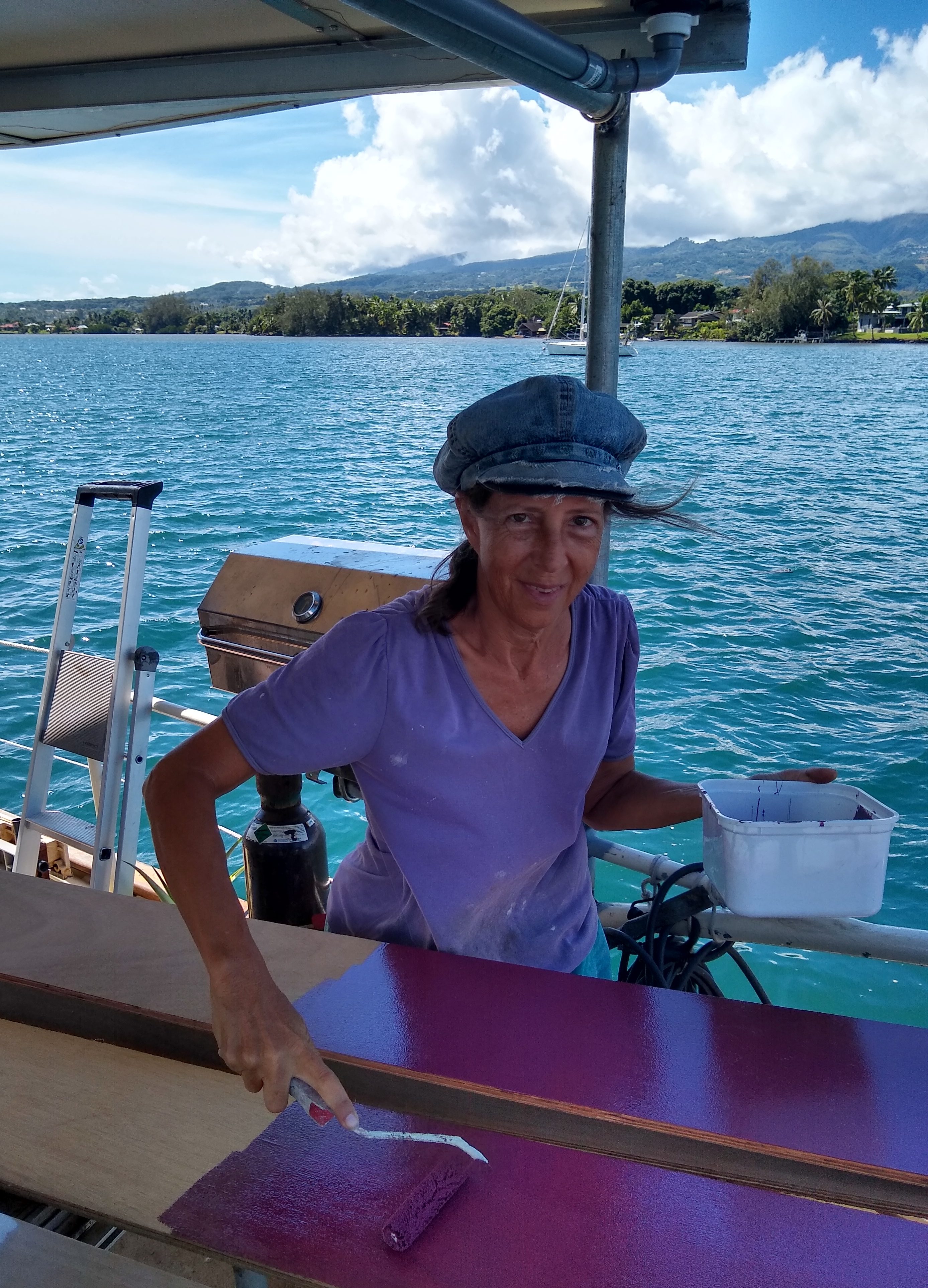 We’ve got a project “to-do” list as long as your arm, though, so don’t worry that we’ll be at loose ends after this one wraps up!

We’ve given ourselves “permission” to use much more internet data than usual during this period, partially because we’re not spending money anywhere else so it doesn’t mean blowing the budget. 🙂 We got a GoogleFi phone and account when we were in the States in December, and have been using it as a hotspot for both of our devices (whereas before we had to go to a wifi hotspot at the local supermarket, and could only get news articles – one at a time – from CNN, Reuters and BBC using our satellite device). We’re discovering podcasts, and enjoying being able to read news from multiple sources. The constant access to researching via Google and texting with friends and family is addictive, and may be part of our “new normal” (including a “new budget”). 🙂 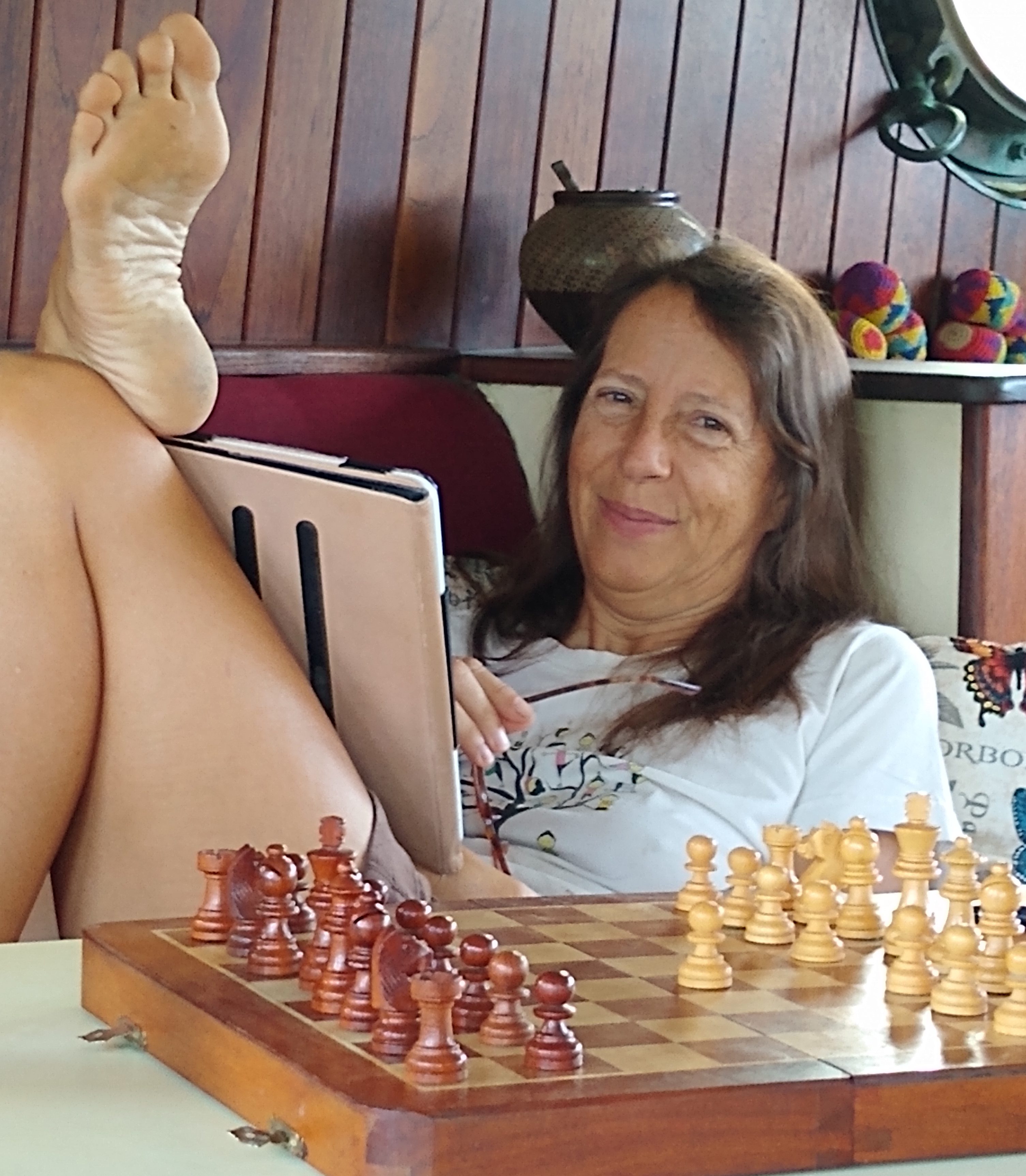 That’s about all the news from LungtaBeGone (with my apologies to Garrison Keillor). Stay safe – stay home! – stay grateful for all the advantages that life has given you, knowing that many others around this planet of ours have not been nearly as lucky!