Things have evolved slowly here, over time, but over time they’ve definitely changed. French Polynesia has been declared free of the coronavirus that has been trouncing the entire human species. The social restrictions have largely been lifted here. We are free to travel around amongst the islands again. Hooray! 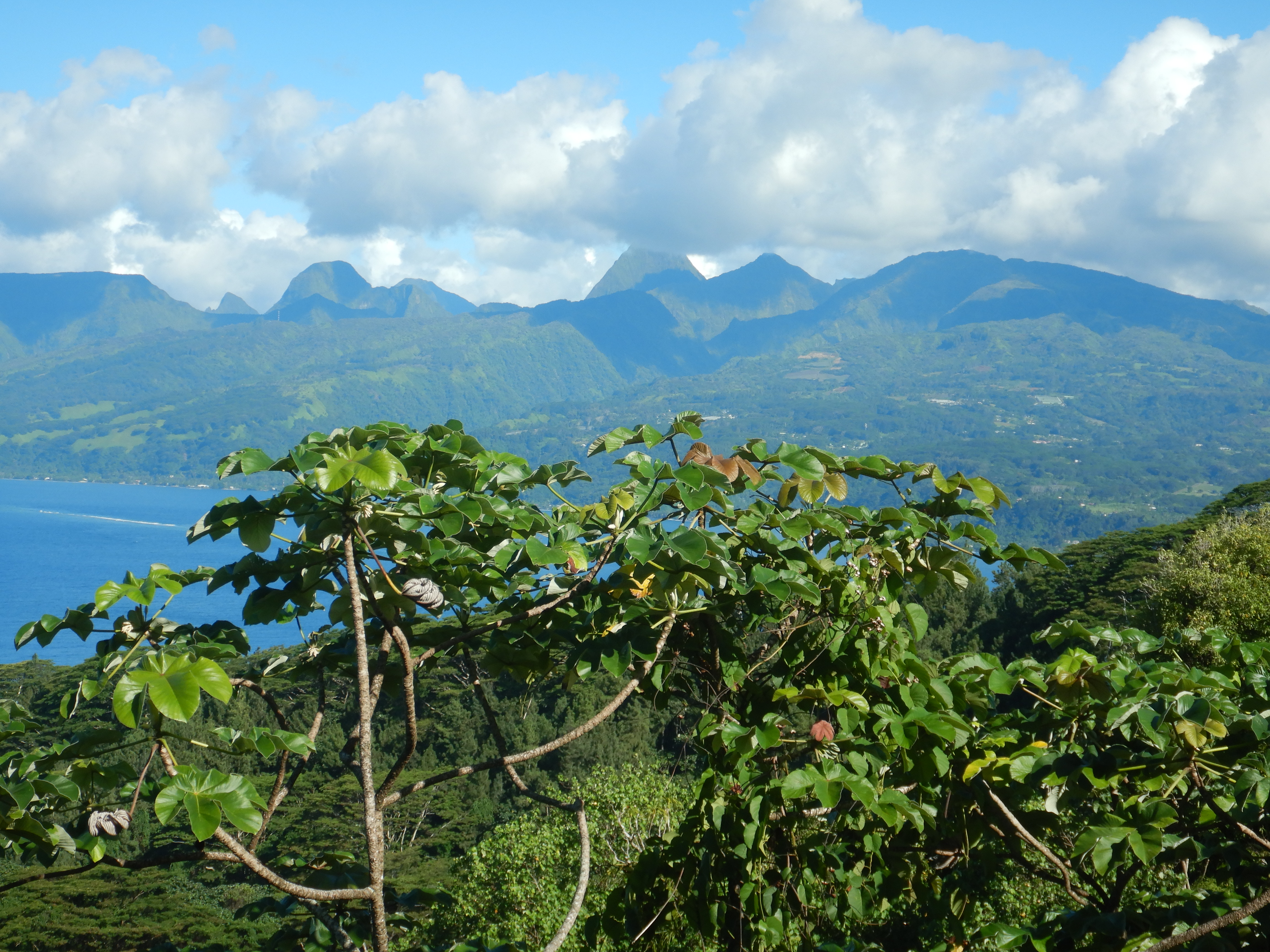 Understandably, the government (and the people) are reluctant to go through the lockdown again, and so restrictions intended to keep interactions with people outside the borders are still in place. In fact, in the time since I began writing this there have been significant developments on this front. Currently there are virtually no airline flights coming into the country, but they have announced plans to phase that back in. Perhaps a few hundred citizens were stuck outside the country who are being brought back 10 or 20 at a time, as space allows on supply planes coming from Paris. There are about 3000 French contract workers, like teachers and medical professionals, whose contracts will begin in September that will also be allowed to arrive in batches. Commercial flights are starting to be scheduled, and as of mid-July tourists from a few countries – including the United States – will be allowed to visit, with a few restrictions but no quarantine. These visitors will need to have travel insurance, be tested just before their trip, provide contact information and itinerary to the health authorities, and stay in regular contact including health updates and the possibility of another screening test. Tourism accounts for roughly 85% of the country’s GDP (6/26 update: I’ve recently learned that it’s closer to 70%), so they’re anxious to resume that as quickly as they can while remaining safe. With only minor changes, life here has basically returned to normal.

We’ve made huge progress on our hard canopy project, and although we continue to wrap up some final cosmetic details we have basically called it done. In addition to just plain being a big project which took longer to build than we’d originally expected, we’ve allowed a bit of “project creep” to occur. 🙂 Once the basic structure was in place and we had a sense of how it would “feel”, Dan realized that we could take advantage of some of the space under the high ceiling as storage for our deck/lawn chairs. He’s trimming it out quite nicely with hardwood braces and fiddles. 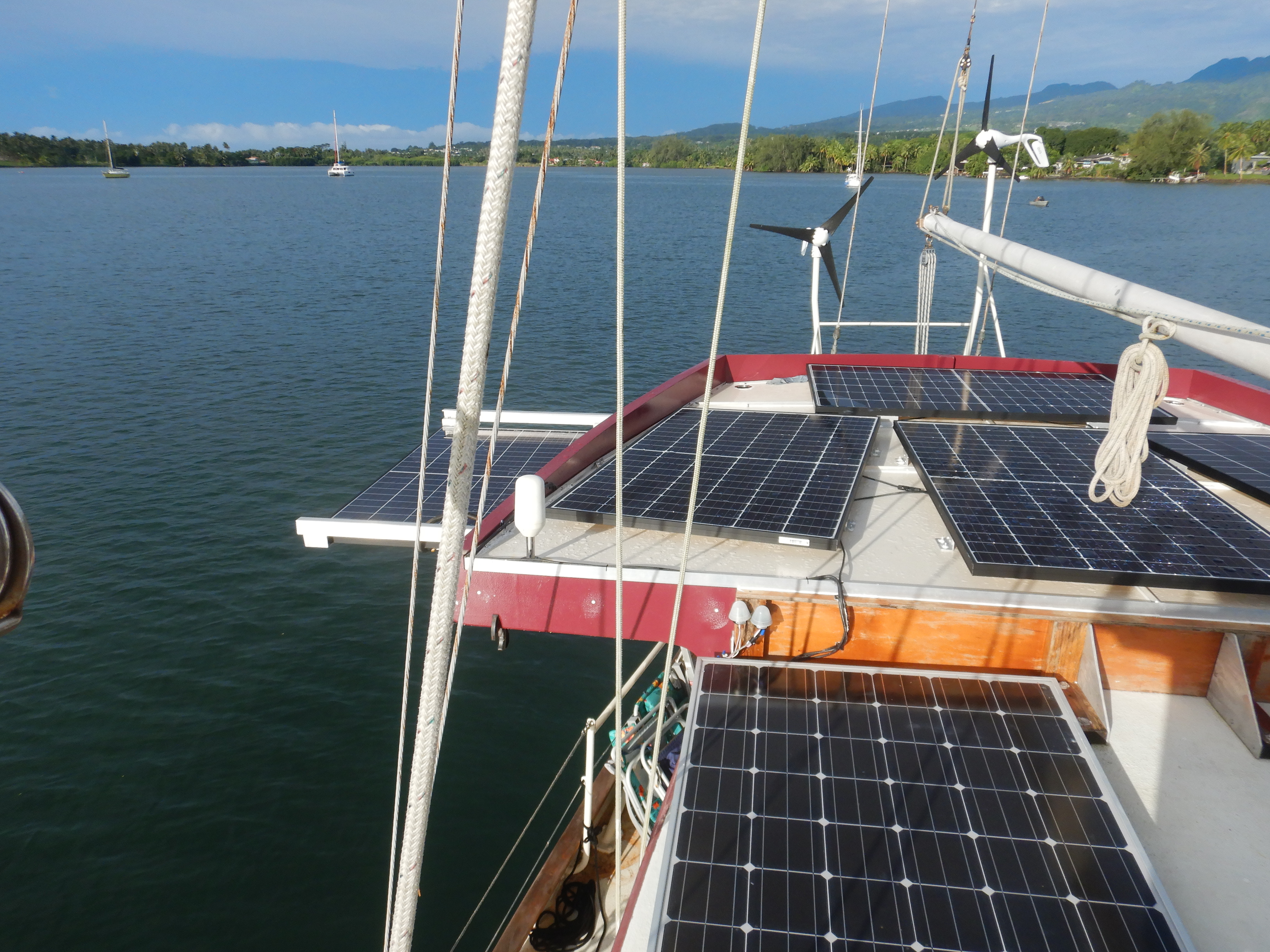 We began this project with 6 solar panels on board. We initially planned to add 3 more on the new canopy and to relocate 2 from the lifelines, where they overhung the back deck. Our original conception for mounting that pair of outboard panels was to mount them sticking straight out to the side from the canopy, but with hinges to allow us to flip them 180 degrees, either underneath the canopy or over on top to cover the panels that are mounted there. The notion was that they occupy space outside the “footprint” of the boat’s hull most of the time but we can bring them inboard in strong weather conditions or tight quarters like a marina or fuel dock. As we discussed the details, though, the hinge idea began to seem more and more complicated to actually build. We ended up scrapping that notion entirely and instead going with a set of sliding rails. After we bought all the material and began cutting it to size, we had a dark moment when we realized that our design would require two of the rails to occupy the same space when both panels were pulled inboard (not a good plan!); but then we had an epiphany: to nest the rails and also stagger the panels vertically. Now that it’s built it looks simple and elegant. We’ve added bolts and blocks to prevent the panels from sliding around once in place or to slide further in either direction than intended. After we got the 3 new ones installed above, we realized that there was actually space for a 4th one – so now we’ve got 10! 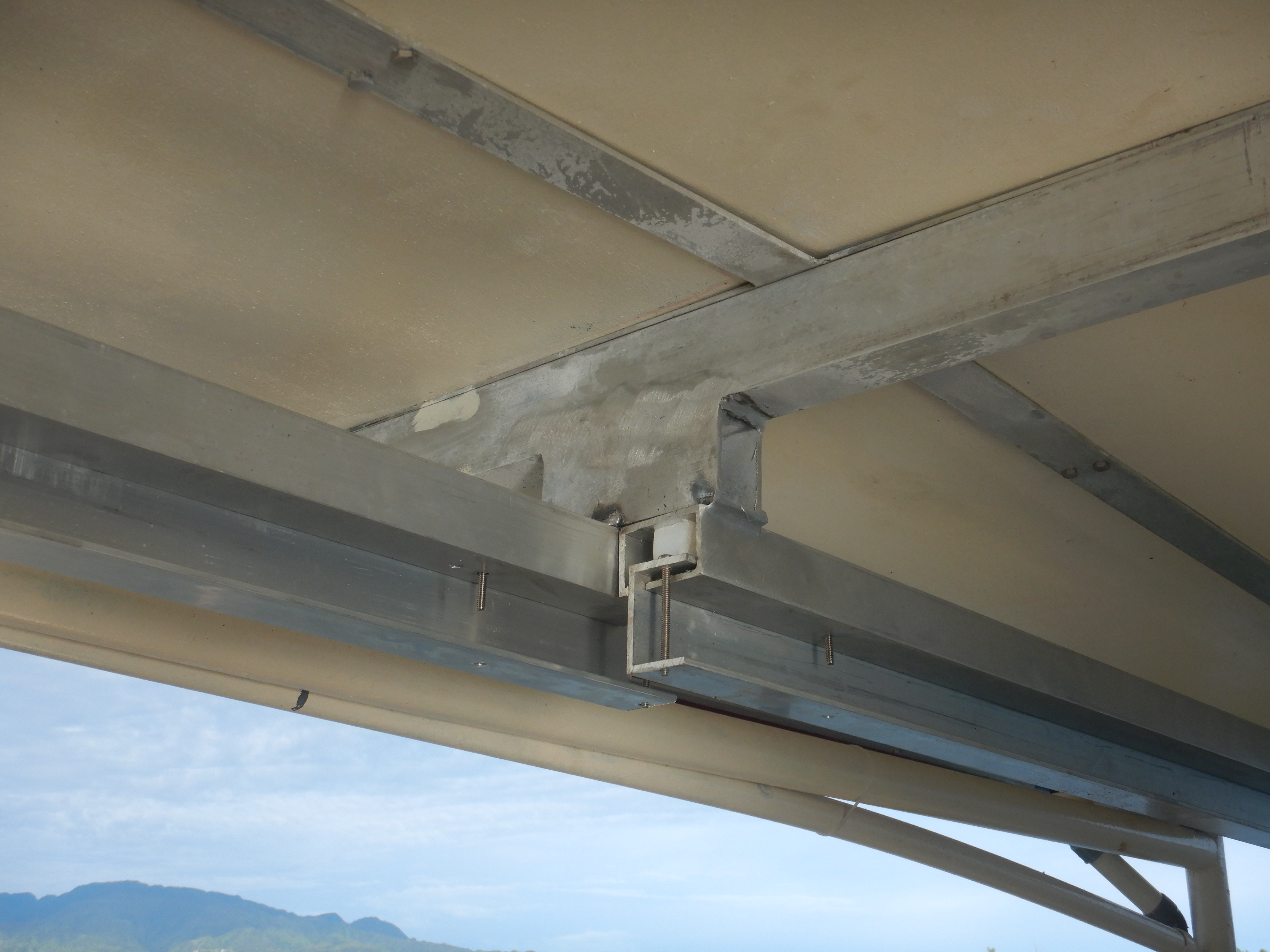 One day last month we were just sitting down to lunch when an unexpected squall came up out nowhere. The winds kicked up and we saw the line of it approaching us across the bay where the water’s surface was turned into white spray. Once it hit us, the boat heeled over to the side, causing our lunch dishes to slide off the table! But we were already running upstairs to deal with the impending situation! We started the engine to drive into the wind, helping to keep the anchor in place (although we did end the day about 100 yards downwind), and ran around the deck securing small things like lawn chairs that could blow overboard. The winds hit up to 50 knots and there was limited visibility through the heavy rain. At least 4 boats ended up aground, although they were all back in deeper water by the next day thanks to a group of locals who came out to help quickly. 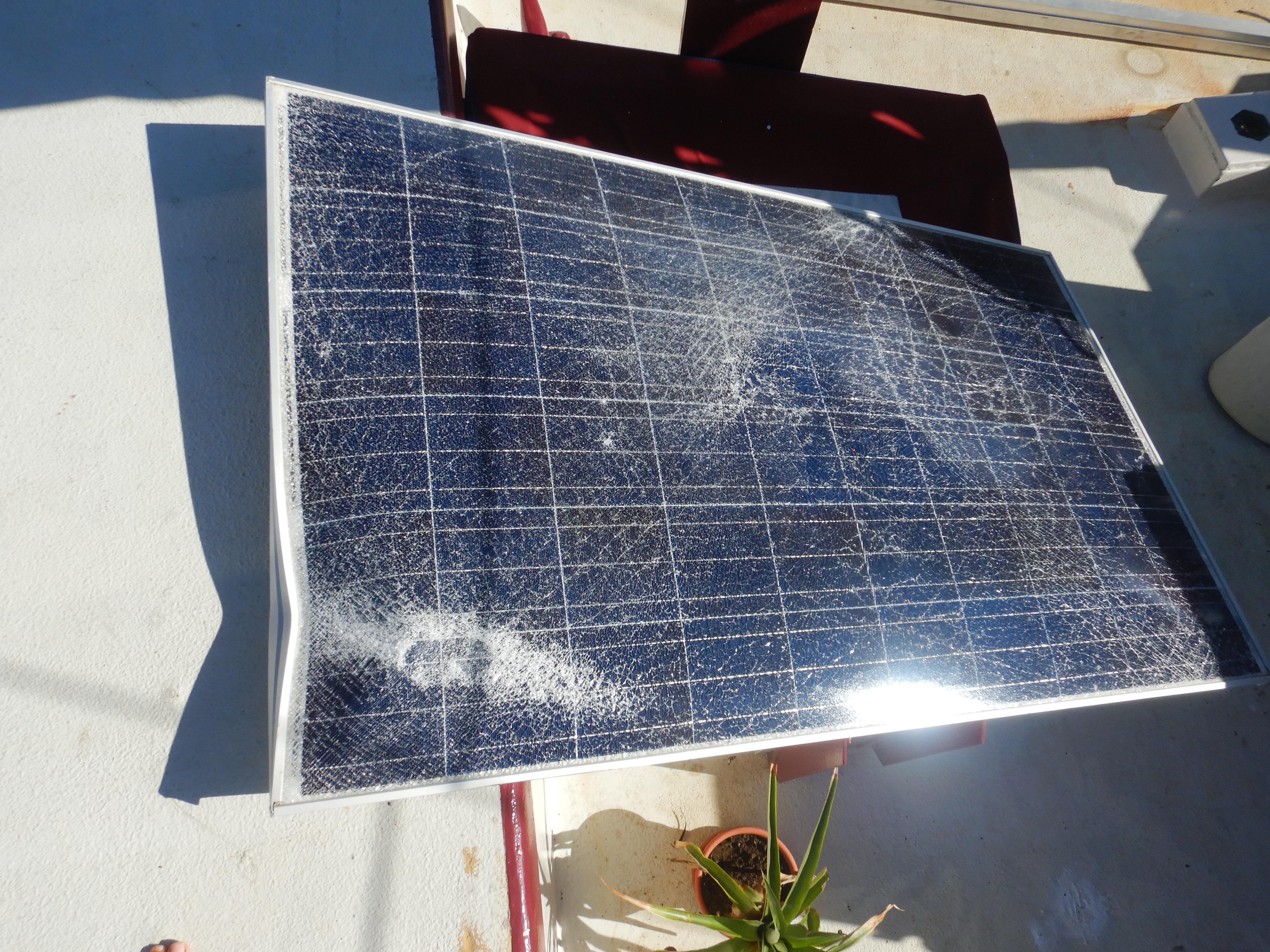 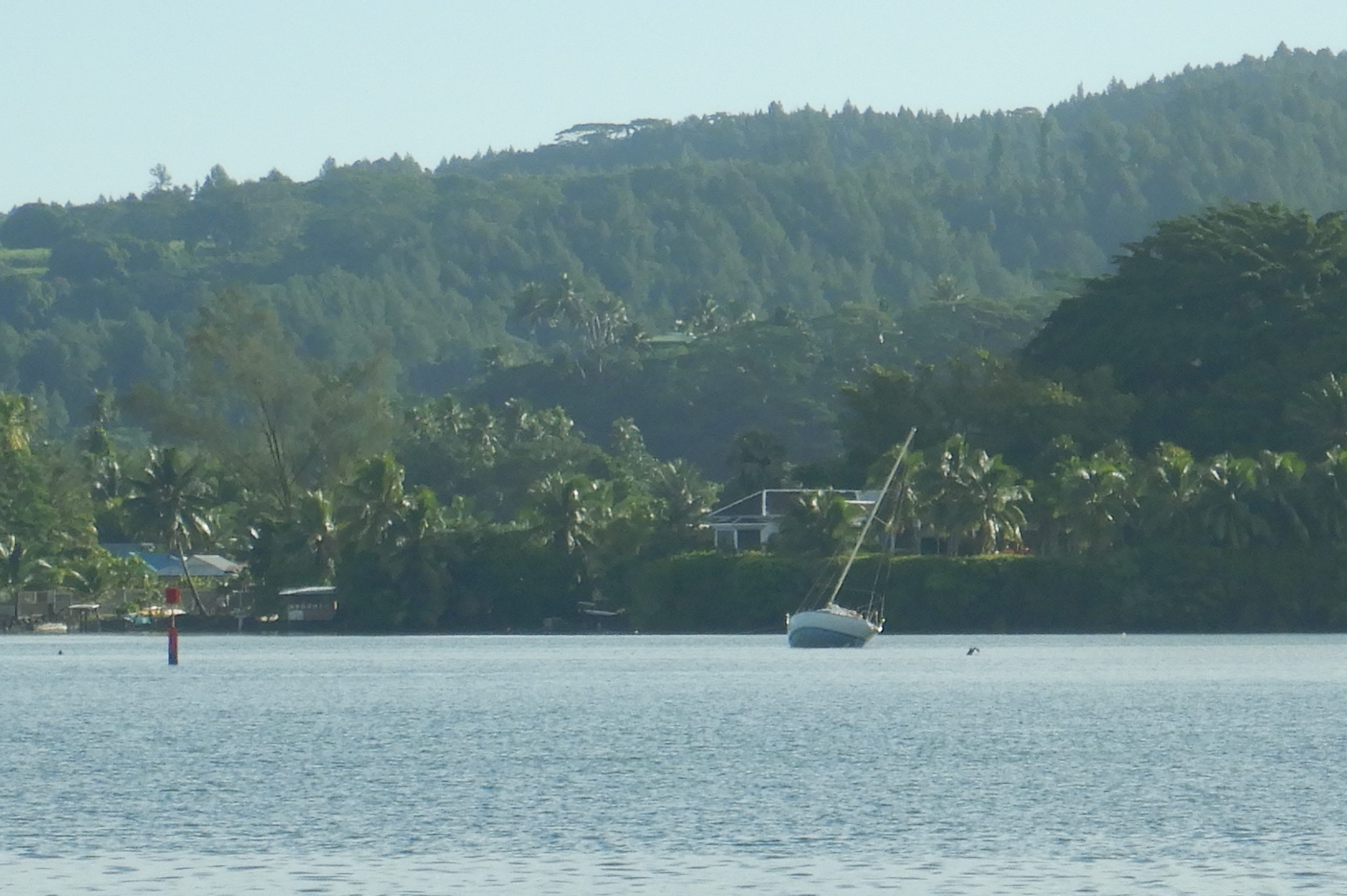 Two of our solar panels (the ones that used to be on the lifelines but were staged to move up to sit on the rails of the canopy) were blown off of the roof of the pilothouse. One was thrown against the mast (multiple times) and shattered; we feel fortunate that it didn’t shatter the nearby one that was permanently mounted to the pilothouse roof, even though it ended up sitting on top of it. The other one was tossed overboard, dangling on the electrical wires until the connectors broke. We’ve purchased 2 new ones and they’re now mounted solidly out on the rails to the side. (We held onto the notion of diving to retrieve it for a couple of weeks, but have lost the drive for that. It’s deep and dark, and we don’t know precisely where it would be; it would require quite a bit of “search and rescue” activity, and the chances that it would still be functional are questionable!)

Altogether, we spent about $1800 on aluminum, $500 on plywood, $2400 on solar panels (and a second charge controller because our previous one wasn’t big enough for everything) and a bit more on stainless nuts, bolts, etc. The materials cost about $5K, a significant portion of our annual budget – and that doesn’t even include $3000 on the new welder (the machine, not the man!) The additional power from the 4 new panels will save about $150/month (in diesel that would otherwise be burned by the generator), so it’s going to be a few years before the project pays for itself. I don’t know how much rain we’re likely to catch, but that brings some power savings as well since it means we will run the watermaker less. And how does one quantify the improvement to our quality of life? Although this was an expensive and time-consuming project, we expect to enjoy it for many years to come!

While we still had the welder set up, we tackled another bigg-ish repair project. The engine’s exhaust passes through a “water muffler”, a box where the hot gases and water are mixed with some cooler water before being expelled from the boat. This box had developed some rusty spots and started to leak. We spent a day disassembling it from the wall – it turned out to be *very* heavy! – and positioning it on the workbench for repair. We couldn’t lift it, even with two of us, so we kept it supported with blocks and just shoved it around until the damaged face was accessible. We cleaned it up with power tools, and found that there was a patch that had several holes kinda like swiss cheese. The next day Dan used the welder to cover that area with some shiny new steel plates. It was kinda “exciting” to be doing the welding inside! Kathy kept a close eye to make sure that no fires were started with the sparks, but the floor and the surface of the workbench are definitely a bit worse for the wear. We used a hydraulic jack to help lift the box back up to the level it came from, and grunted it back into place. Another successful DIY home project! 🙂 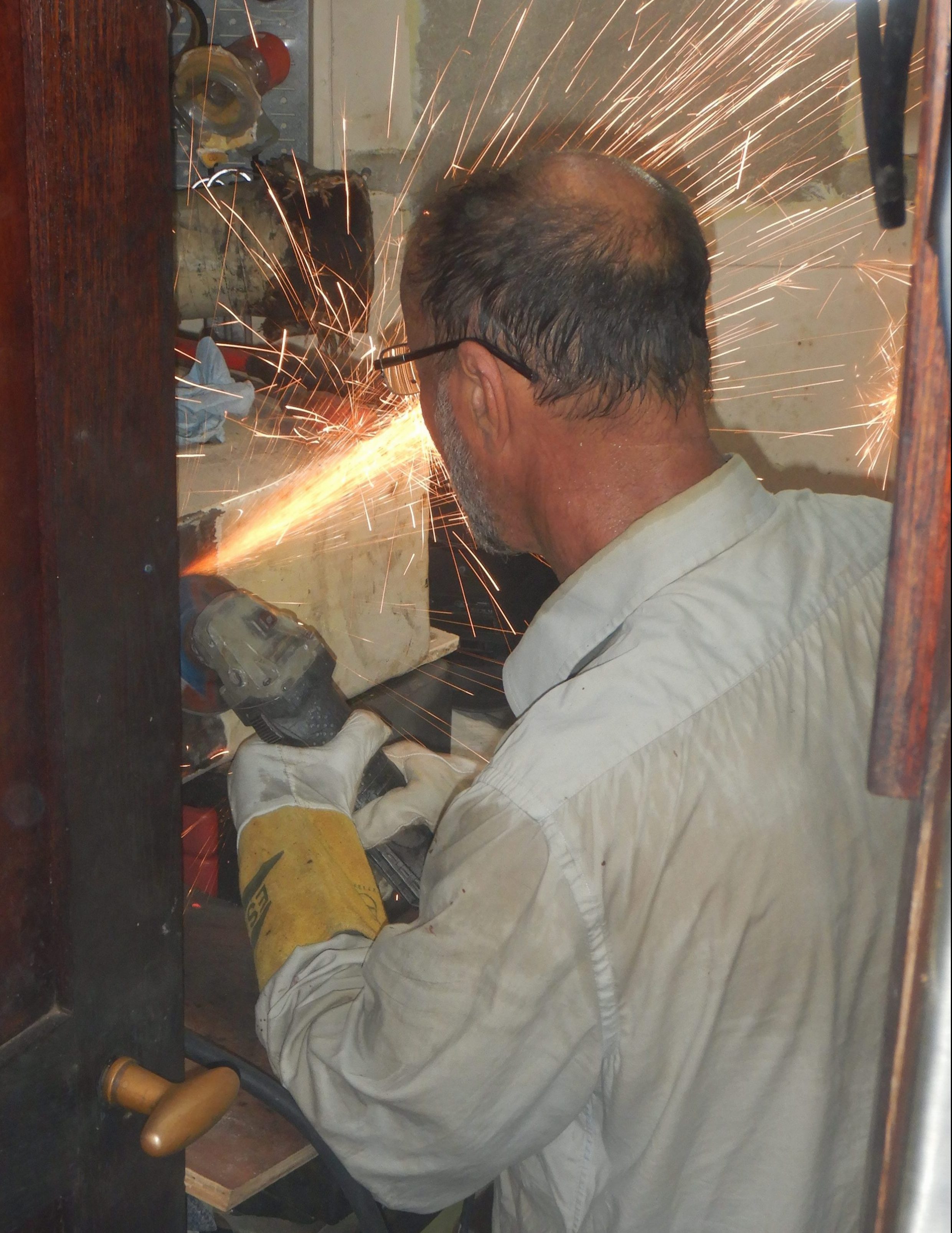 Our social life has been pretty seriously curtailed these last few months, but there’s been one ray of sunshine. On New Year’s Eve we met a woman named Fabienne who has become a good friend. She’s a nurse from France, working on a 4-year contract as the school nurse at a nearby middle school. As soon as the restrictions were lifted, we have included her in our household “bubble”. She has had dinner with us several times, and has generously offered her car to us to drive up to Pape’ete a few times rather than taking the 90-minute bus-ride. She loves to hike and has taken us with her on a few nice treks. As a matter of fact, we’re going on another this coming weekend. She also loves to swim and has been learning to scuba-dive. One time she came over to Lungta and we practiced diving below the boat: not very interesting to us, but she was thrilled! She tried using the “hookah” that we use for cleaning the boat’s bottom and had a lot of fun scraping away at all the growth – I’m serious! 🙂 We’ve been lonely here, largely because we don’t know anyone locally and the language barrier feels insurmountable for us. But Fabienne has really taken the edge off of that sense of isolation. We hope she’ll visit us as we continue our travels in the future… 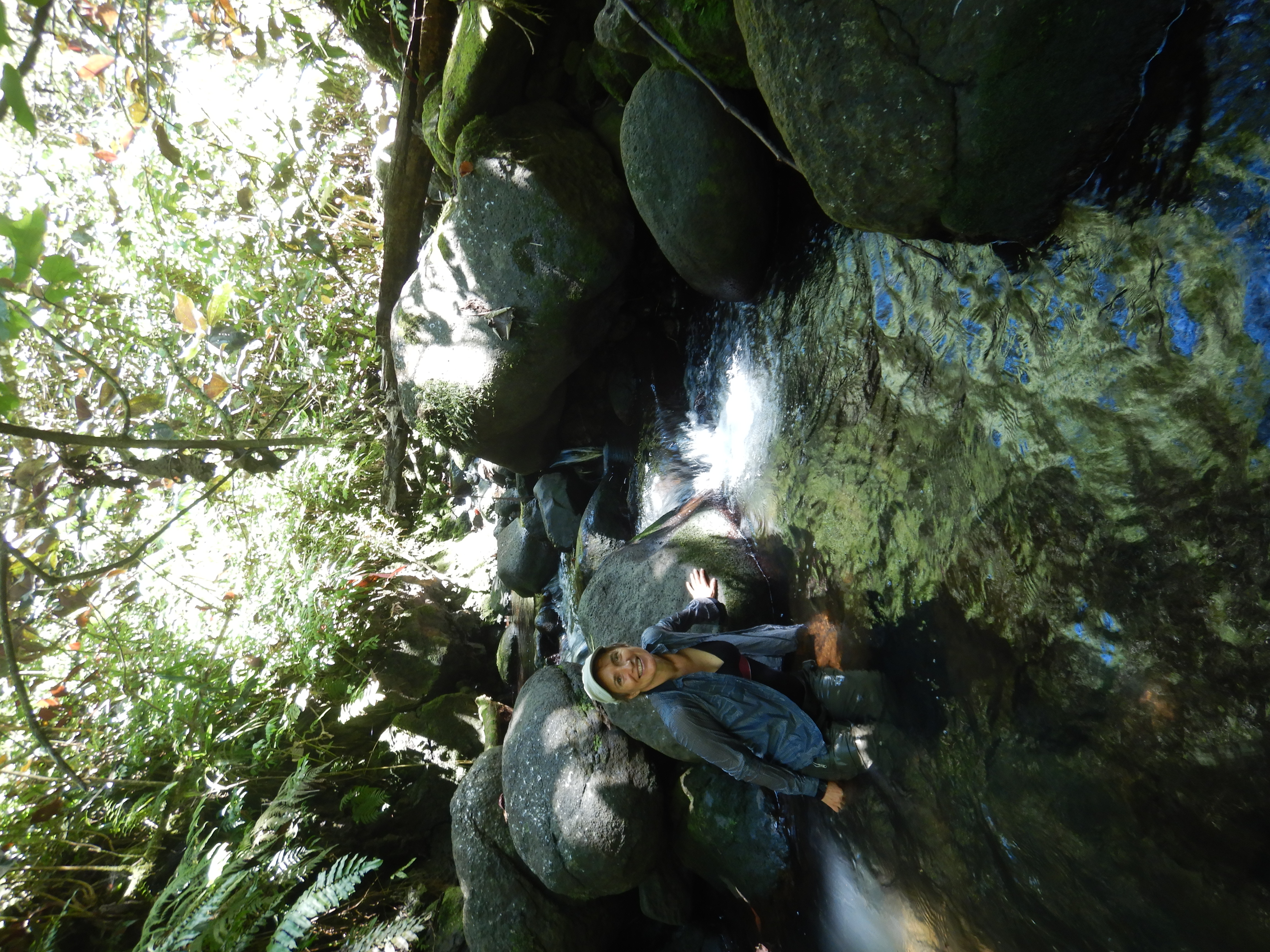 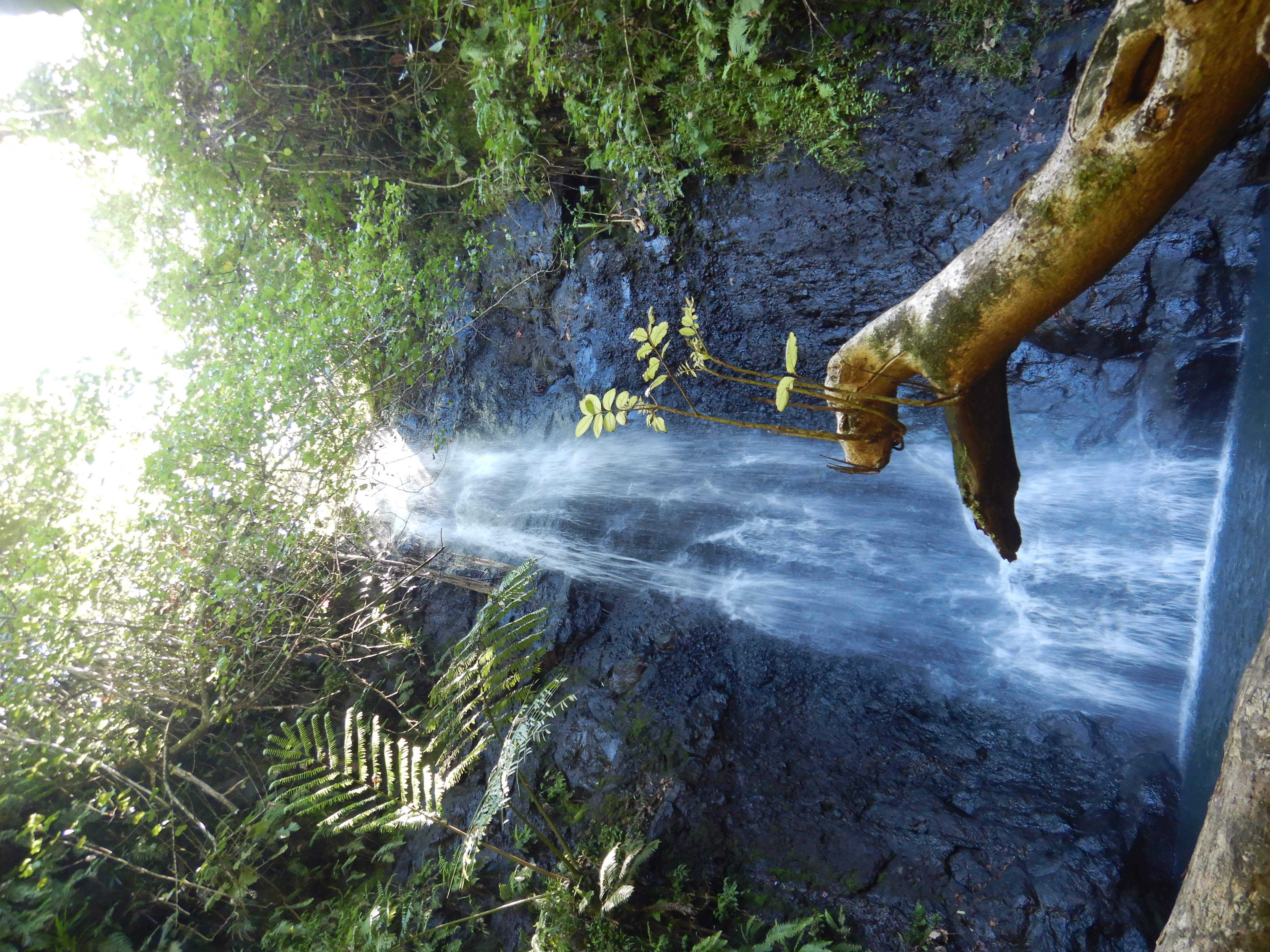 We’re now preparing to leave Port Phaeton and head back to the beautiful atolls of the Tuamotus. We’ve put away all the tools and extra materials from the canopy project, cleaned the bottom of the boat so she will slide through the water without interference from the barnacles, sponges and fern-like growth which accumulated over the last six months and are looking for a favorable weather window. Since the typical winds come from the east and that’s the direction we want to go, it may be a week or two. But when we find it we’ll jump on it. We’ll post again when we have news from Paradise. 🙂 We’d love to hear from you – you can use a new address that we established which is forwarded to both our satellite device and our land-based mail server, so you never need to figure out where we’ll be checking. It’s underway@lungtalife.com (The only weird thing might be that our replies will come from whichever address we happen to use for checking it. 🙂 ) Like one-stop shopping!

Hoping all of you are staying safe and healthy during this turbulent year! 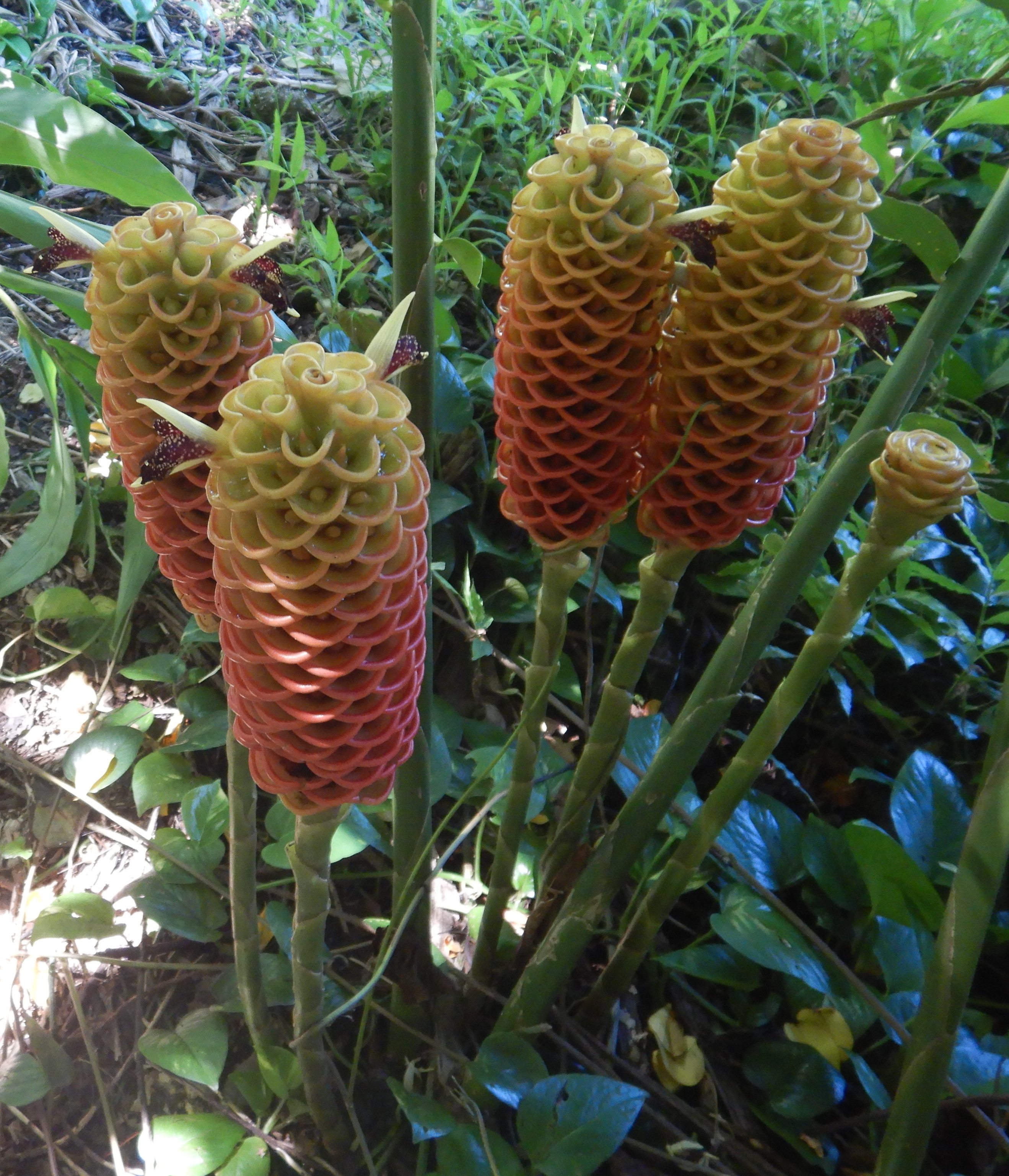